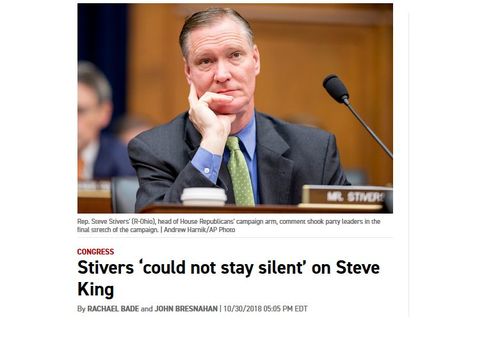 Re: Stivers ‘could not stay silent’ on Steve King, by Rachael Bade And John Bresnahan, Politico, October 30, 2018

From: An Ohio Republican Woman [Email her]

I live in the 15th District of Ohio, and National Republican Congressional Committee (NRCC) Chairman Steve Stivers (R-Ohio) is my rep, his headquarters is a few blocks from my home. He is a cuck, putting illegals ahead of citizens. (NumbersUSA gives him a B, but see House GOP campaign chief calls on admin to stop family separation at border, The Hill,June 18, 2018.) That did not stop the illegals protesting him, which was annoying for me on my way home from work.

Just an FYI about why Stivers would attack someone like Steve King who cares about America—see below:

Congressman Steve King’s recent comments, actions, and retweets are completely inappropriate. We must stand up against white supremacy and hate in all forms, and I strongly condemn this behavior.