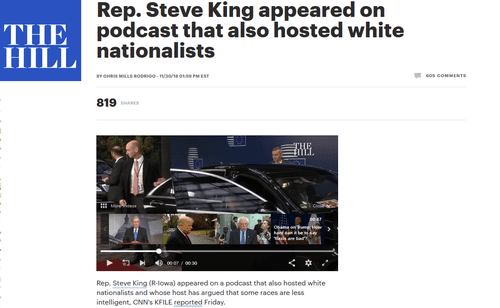 Here's the latest "guilt-by-no-association" smear on Steve King—blaming him for appearing on Stefan Molyneux's podcast, which apparently makes him responsible for the opinions of not only Molyneux himself, but everyone who's  ever been interviewed by the same guy. That includes  VDARE.com editor Peter Brimelow and Jared Taylor.

Rep. Steve King (R-Iowa) appeared on a podcast that also hosted white nationalists and whose host has argued that some races are less intelligent, CNN's KFILE reported Friday.

King called the Congressional Black Caucus "the self-segregating congressional black caucus" and described the group as a "grievance committee" that hijacked Martin Luther King Jr.'s message, according to CNN.

The lawmaker, who narrowly won reelection this month, also said that 1960s immigration reform is to blame for NFL players who kneel in protest during the playing of the national anthem.

"Ted Kennedy said, 'this won't change the demographic makeup in America,' and he meant there'll be just as many Irish coming in as there used to be. And of course, that didn't turn out to be true," King said, referring to the deceased senator. "And now we have people kneeling on the sidelines at the pro football games out of disrespect to our flag and what it stands for."

Molyneux had guests including Jared Taylor, the founder and editor of American Renaissance, a white supremacist online magazine, and Peter Brimelow, the creator of the white nationalist website VDare, on his podcast before King, according to CNN.[More]

The weird thing about this, that only happens to conservative politicians and journalists, is that they're saying elected officials should shun evil journalists.

Look what happened when President Trump tried it on Jim Acosta! For the record, Peter Brimelow and Jared Taylor have not only appeared on Molyneux's podcast, but in the Washington Post, New York Times, CNN, NBC and Fox News. 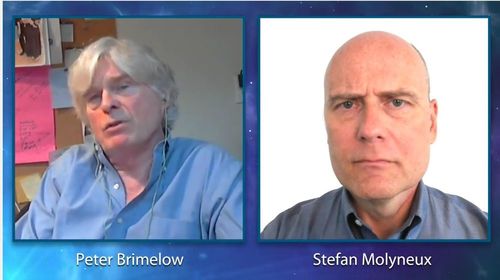 VDARE.com editor Peter Brimelow was interviewed by podcaster Stefan Molyneux of FreeDomain Radio. You can watch it on YouTube, below or listen via MP3 or Soundcloud.

In preparation for this interview, Stefan Molyneux watched this old interview: