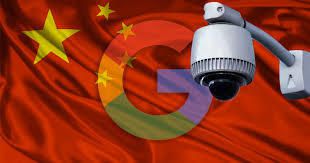 Thanks To Tech Totalitarians, U.S. ALREADY Has A China-Style “Social Credit System.”

While protesters in Hong Kong fly American flags and rip down security cameras, an even more insidious Chinese-style “social credit” system is solidifying in the United States [Hong Kong Protesters Wave U.S. Flags, Urge Trump to Take Action, by Owen Franks, Bloomberg, August 31, 2019]. The Trump Administration is considering an alliance with Big Tech to determine who is allowed to own guns [Power Up: White House ponders new proposal to identify links between mental health and violence, by Jacqueline Alemany, Washington Post, August 22, 2019]. The Main Stream Media wields more power than the state itself, blithely doxing private citizens it wants to destroy because of their political views. Finally, the mysterious purge (and equally mysterious re-establishment) of some Dissident Right YouTube accounts shows that political debate is being managed from the top-down. Every American can have his job, constitutional rights, and reputation destroyed by a power structure that is completely unaccountable–and it’s being imposed on us in the name of “freedom.”

Sadly, President Donald Trump seems oblivious to this attack. He’s failed to defend those who defended him. He instead filled his administration with enemies eager to smear him in tell-all books [John Kelly told Trump his memoir would wait unless attacked, by Caitlin Yilek, Washington Examiner, September 4, 2019].

He’s now taking this self-defeating principle outside his administration. Though Google and other Big Tech companies will do everything they can to prevent his re-election, President Trump is mulling partnering with them to gather data on “risk factors” in order to prevent mass shootings. This reportedly includes using data from “Apple Watches, Fitbits, Amazon Echo, and Google Home” [White House considers new project seeking links between mental health and violent behavior, by Jacqueline Alemany, Washington Post, August 22, 2019].

Only the most naïve can believe that private data or recorded conversations won’t be weaponized against patriots. After all, an email, Facebook comment, or old tweet can already get you fired from your job–even a government job. Leif Olson’s rehiring may not have been a true victory against “cancel culture," but we shouldn’t lose sight of the casual cruelty that motivated the attack in the first place. Hurting people, rather than informing people, seems to be the only motivation of MSM journofa.

We’ll never know the story behind Jeffrey Epstein or what motivated the mass shooter in Las Vegas (remember that?). But journofa won’t rest until they’ve doxed every Gamestop employee and pizza deliveryman who went to Charlottesville!

Another example: “dozens” of Customs and Border Protection officers may lose employment or suffer lesser penalties after their comments in a private Facebook group were leaked [Customs and Border Protection moving to fire and discipline dozens of agents for Facebook posts, by Anna Giaritelli, Washington Examiner, September 5, 2019]. An unnamed “senior CBP official” proclaims that this isn’t enough because they need to “change the culture” of the service.

Wednesday morning a group of 66 people, mostly family units, crossed the border where the fence ends east of Sasabe. Video shows the group approaching the fence and walking to the end. 30% of apprehensions in the #TucsonSector are family units surrendering to #BorderPatrol. pic.twitter.com/C5wI3HKLrt

It’s hard to imagine a more perfect example of anarcho-tyranny than a government incapable of protecting its own border or facilities but eager to punish those expected to accomplish an impossible mission.

Of course, there’s a rationale why speech must now be policed—to stop “radicalization.” The YouTube purge did not come out of nowhere. The MSM has been relentlessly campaigning against YouTube supposedly “radicalizing” people [YouTube recommendation algorithm audit uncovers paths to radicalization, by Khari Johnson, VentureBeat, August 28, 2019].

But what journofa really mean by “radicalized” is “voting in a way we don’t like.” This explains the strange American focus on Brazil and President Jair Bolsonaro [How YouTube Contributed to Radicalization in Brazil, by Nancy LeTourneau, Washington Monthly, August 14, 2019].

The implicit premise, gradually becoming more explicitly voiced by journofa and tech oligarchs, is that only certain people should be permitted to speak. This is also why so many journalists responded like someone had committed lèse-majesté when President Trump’s allies began scrutinizing their social media accounts. They truly believe they should be beyond criticism and should oversee what we say, write, and hear.

What’s particularly terrible about this situation is how arbitrary and random it is. “Radicalization” is in the eye of the beholder. To an Obama voter in 2004, something like “Drag Queen Story Hour” would be a ridiculous fever dream from the Christian Coalition. Today, opposing it will get you labeled a bigot [Crowds rally for Drag Queen Story Hour: ‘It just shows how far we’ve come,’ by Marcella Corona, Reno Gazette-Journal, July 20, 2019]. If you oppose it too energetically, it might spark a hit piece and that’s your job.

Words and symbols can also be labeled “hateful” retroactively. A month ago, “kritarchy” was an objective term that referred to “rule by judges.” Today, it’s an anti-Semitic slur because journalists simply declared it so.

In Utah, an interracial couple who brought a Betsy Ross flag to a soccer game was threatened with ejection. The stadium management said the flag was a symbol of “hatred, divisiveness and/or intolerance, whether intentional or otherwise” [Controversy erupts over Betsy Ross flag at RSL soccer game, by Lauren Steinbrecher, Fox 13, August 29, 2019]. Yet nobody thought this until Colin Kaepernick declared it so because of its “connection to an era of slavery”–which, of course, could be said about anything related to the Founding.

The System’s arbitrary nature makes it even more dangerous. Already, websites have been stripped of payment processors or access to PayPal (VDARE among them) after attacks by journalists and “nonprofits” like the Southern Poverty Law Center and the Anti-Defamation League. The loss of a YouTube account can mean the end of a creator’s career. Some individuals have been banned from Airbnb or Uber or have lost their personal PayPal accounts, not because of any violation of terms of service, but because of an unknown ideological test. This is the equivalent of the gas company cutting off any California residents who voted for Proposition 187.

You just don’t know what will be decreed offensive–or for that matter, beyond criticism–a year from now. You don’t know if your YouTube account will be banned or not because the terms of service are meaningless. If you lose your PayPal, your bank account, your web domain, or some other necessity, there’s no appeal and there’s no objective standard.

Will this end with “build your own country”?

The obvious implication: if dangerous individuals must be depersoned and “radicalizing” videos banned, ordinary people cannot be trusted with political power either. They shouldn’t be allowed to vote because they’re too easily manipulated. It would be more honest to simply let the corporate heads of Facebook, Google, and Twitter pick the next president (with the heads of the SPLC and the ADL given power to veto).

Yet that would make what’s happening too obvious. The ritual of voting gives the System the veneer of legitimacy–even though, as Ann Coulter points out, what we vote for bears no resemblance to the policies we actually get.

“Authoritarian” political systems have one key virtue compared the American system: They don’t disguise who has control. We know that Vladimir Putin in Russia and Xi Jinping in China are, if not fully sovereign, at least operating at the nexus of political power.

In contrast, President Trump does not seem to run his own administration, let alone the country. Instead, the power to shape opinion, to make and end careers, and to command who is and isn’t accountable to the law lies in the hands of tech oligarchs, far-left journalists, and wealthy “nonprofits.” It is effective precisely because it eschews the symbols of power for the reality. Its tyranny is even more insidious for that reason.

It’s almost enough to make one wish for a Politburo. At least the people in Hong Kong know what to tear down.