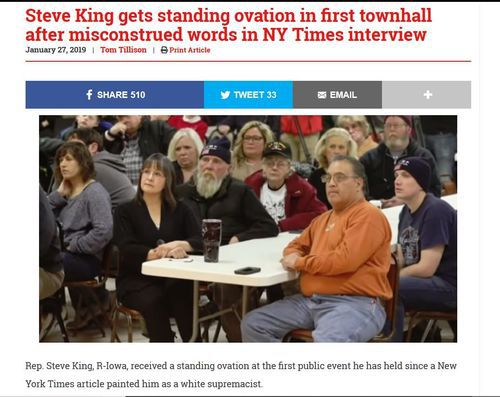 Steve King seems to have weathered the storm and remains in Congress following the sustained Main Stream Media attack earlier this month. There's an argument to be made that Steve King humiliated himself, voting for his own condemnation and not making the point that whites really do have legitimate collective interests, the same as everyone else. [Steve King Muffs It, by Gregory Hood, American Renaissance, January 16, 2019]However, if Congressman King retains his seat in Congress, then that is arguably a more signifiant long-term victory than if he made a defiant speech as a swan song before an early exist.

That said, Congressman King seems to be sticking to his defense that he is not a racist and that his comments were distorted by the MSM. This has the benefit of being true, it's just a question of whether voters will believe him.

The first signs are good.

Rep. Steve King, R-Iowa, received a standing ovation at the first public event he has held since a New York Times article painted him as a white supremacist.

Iowans see the man they elected nine times to represent them in Congress in a far different light than the New York Times, which King insisted took his words out of context in an ill-advised interview that sparked major controversy — King realizes the newspaper is no friend of his and told those gathered at a town hall meeting in his district over the weekend that he never should have agreed to the interview.

Journalists are enraged that Steve King has not internalized their smears against him. Their rage is also now directed against the people of Iowa.

Over the last few weeks, Iowa Rep. Steve King has defended white supremacy, been reprimanded by his own party leaders, and been stripped of his committee positions in Congress, yet in his mind, he has done nothing wrong — except agree to an interview with The New York Times...

But King’s town hall event Saturday was also a reminder of his enduring popularity in a congressional district that’s nearly all-white. King’s constituents know his views support white nationalism — many just don’t care. At one point, a questioner stood up in the town hall to defend King, thanking him for all his work supporting “the white, European man.”

Journalists really are coming to think of themselves as a priestly class, with the power to excommunicate not just elected officials, but the electorate itself. No wonder so many people are happy when they get fired.