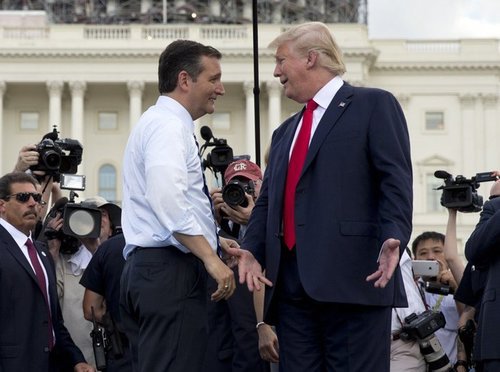 Even Donald Trump can’t single-handedly turn Republicans into a party for immigration patriots. But the GOP frontrunner is receiving some support from an unexpected quarter—Senator Ted Cruz. Albeit overshadowed by the Paris bombing, Cruz has suddenly started to sound like Trump when it comes to birthright citizenship, limiting H1-B visas, attacking the Donor Class, and building Trump’s signature wall. Not surprisingly, Trump has even speculated about the Texas Senator as a vice-presidential candidate. [Trump names Cruz when asked about VP spot, By Mark Hensch, Politico, November 17, 2015]Regardless, a process of radicalizing the party is underway that the GOP Establishment can’t control.

Greatly to his credit, Ted Cruz opposed the Gang of Eight’s Amnesty/ Immigration Surge bill. But, looked at in more detail, Cruz has a checkered record on immigration, often falling into the cliché of “legal immigration good, illegal immigration bad. His overall position at the beginning of the primary season was distinctly weaker than that of some other candidates. Cruz barely mentioned immigration when he announced his campaign and he has a long record of wanting to boost H1B visas as a handout to the Donor Class.

Unexpectedly, however, Cruz made his move during the most recent Republican debate. As the moderators tried to bait other candidates into attacking frontrunner Trump, Cruz unexpectedly threw down the gauntlet on immigration, blasting any effort to turn Republicans into the “party of Amnesty” and, critically, connecting the immigration issue to low wages.

In the days that followed, Cruz outright switched sides on H1B visas, saying he would halt the program pending the outcome of an investigation into abuse. He also said he would not support any increases in legal immigration because of unacceptably high unemployment [Ted Cruz turns on legal immigration, by Benjy Sarlin, NBC News, November 13, 2015].

While Cruz has largely refrained from attacking Donald Trump, a pro-Cruz super PAC has unleashed an advertising campaign in Iowa savaging Donor Class favorite Marco Rubio for his support of the Gang of Eight bill, which the ad characterizes (correctly) as an “Amnesty scheme” shaped in collusion with Barack Obama [New Radio Ad Hammers Marco Rubio Over Immigration, on Ted Cruz’s Behalf, by Maggie Haberman, New York Times, November 17, 2015]

Even more significant, Cruz has explicitly committed to ending birthright citizenship, bringing up the topic during his stump speeches, and, critically, featuring it in his official platform [Cruz Plan To Stop Illegal Immigration Highlights, Ted Cruz 2016, Accessed November 23, 2015].

For good measure, Cruz also says in his platform “I will complete the wall”—and vows to triple the number of Border Patrol agents.

And especially promising: like Trump before him, Cruz is now reportedly working with America’s Senator, Jeff Sessions, on the immigration issue [Ted Cruz hits GOP field on immigration after debate, MSNBC, November 11, 2015]

Unfortunately, Ted Cruz also still shows some signs of that cynical calculation that so many people decry in him. Recently, he bemoaned certain unnamed Republicans “whose rhetoric is unhelpful with regard to immigration” and lectured “tone matters” [Ted Cruz: “Are there some in the Republican Party whose rhetoric is unhelpful with regards to immigration? Yes,” by Allahpundit, Hot Air, November 23, 2015]. The fact that Cruz was saying this while campaigning in Iowa with Steve King, who has faced the same kinds of accusations as Trump about “tone,” did not go unnoticed.

Cruz is also triangulating against Donald Trump over Syrian refugees, criticizing Trump’s proposed registries (which anyway have been mischaracterized by the Main Stream Media) in a disappointing genuflection to Political Correctness. [Cruz rejects Trump’s support for Muslim registries, by Katie Glueck, Politico, November 20, 2015]

Cruz is now claiming to be opposed to the admission of Muslim refugees while expressing willingness to welcome Christians, a reversal of his previous position [Ted Cruz Last Year: We Should Welcome Syrian Refugees, And We Can Do It Safely, by Nico Pitney, Huffington Post, November 18, 2015]. But considering how Cruz has lectured persecuted Middle Eastern Christians that the real issue was that they were too “anti-Semitic” and hateful, it’s hard not to interpret this as a nakedly political move.

And, ominously, Cruz also has still not closed the door to eventual legalization for illegal immigrants, referring vaguely to an eventual “national conversation” about their status.

To give him due credit, Cruz refers to the need for a mandatory E-verify system and some deportations, which he sensibly says will hopefully lead to “the number of people here illegally drop[ping] significantly [i.e. attrition through enforcement] [Ted Cruz won’t rule out legalization for 11 million in U.S. illegally, Time, November 20, 2015].

Still, Rubio is countering Cruz’s charges of being soft on the immigration issue by saying Cruz and Rubio share “almost all the same views on immigration,” especially on legalization for illegals once the border is secure (whatever that means) [Cruz takes the gloves off, attacking Rubio on immigration, by Katie Zezima and David Weigel, Washington Post, November 12, 2015]. Unless Cruz rules out legalization, at present there’s not much he can say in response besides ending birthright citizenship. This means that he still comes off as having a weaker position than Trump.

Trump himself still seems divided about how to respond. On one hand, he has said they will go to “war” if Cruz keeps gaining [Trump: I’ll ‘go to war’ with Cruz if he rises higher, by Mark Hensch, The Hill, November 16, 2015]. But shortly afterward, Trump actually mentioned Cruz when he speculated about a possible VP pick [Trump names Cruz when asked about VP spot, by Mark Hensch, The Hill, November 17, 2015]

The truth is that Cruz is simply following where Trump leads because The Donald has successfully shifted the Overton Window. One thing the parasitic class of GOP consultants and “strategists” never understand: politics is not just about positioning a candidate in the static sweet spot where he can mediate public opinion. A constituency can be mobilized or radicalized. A skilled leader can shift the terms of the debate. Trump has done just that.

The white base of the Republican Party is actually more militant, dedicated and radical than its putative leaders in the GOP. While the likes of George W. Bush, Mitt Romney, and Paul Ryan served to actually dampen the enthusiasm of their voters, Trump is whipping up their enthusiasm to a fever pitch.

As even the generally-useless George Will has noted, Ted Cruz is implicitly using some variant of the Sailer Strategy to win. Thus he can’t afford to antagonize Trump’s supporters. In effect, he is providing cover for Trump. He is even helping take out Trump’s most dangerous foes, especially Marco Rubio. Cruz’ appeal to evangelicals is also weakening Ben Carson, who is bleeding supporters as Cruz rises [Fox News poll: Trump gains, Carson slips, Cruz and Rubio climb in GOP race, by Dana Blanton, Fox News, November 22, 2015]

At some point, Cruz has to supersede Trump in order to win the nomination. But as even Leftist outlets have observed, because Cruz risks alienating his own supporters, he has to count on Trump imploding. And Trump hasn’t imploded yet. What evidence is there that this will ever happen? [Ted Cruz has a Donald Trump problem: He’s waiting for a Trump collapse that may never happen, by Simon Maloy, Salon, November 23, 2015]

Ted Cruz also has a larger strategic problem. He is running as a “right of the right” candidate who is essentially trying to out-conservative” everyone else. No matter how he triangulates, no one will take Ted Cruz seriously as a moderate. In contrast, Trump is actually growing the party by winning blue collar voters, what used to be called Reagan Democrats. Cruz can trump the Trump when it comes to “movement” credentials, but the white base cares more about trade, immigration, and a larger idea of national greatness. And here, no one can match Trump’s appeal.

As a result, unless Trump manages to inflict a catastrophic injury on himself (sadly, always a possibility), Cruz is limited strategically to serving as Trump’s wingman. By the time Cruz can dispose of Rubio and turn on Trump, it will be too late.

From an immigration patriot’s point of view, Cruz is simply helping to consolidate Trump’s positions on border security, H1-B visas, and birthright citizenship as part of the GOP mainstream.

Only Trump can stump Trump. Barring that, Cruz isn’t a rival.

But nevertheless, whatever his motives, Cruz’s conversion is very good news for immigration patriots—an objective ally in the historic process of turning the GOP from a tool of the donors into the National Conservative party America so desperately needs.