Americans' eyes do not exactly glaze over at the mention of Canada. Let's just say they manage a look of polite interest. But there is little reason for them to feel guilty. Even Canadians are fairly unexcited about their own country.

Undeterred by all this indifference, Andrew H. Malcolm, the former Toronto bureau chief for the New York Times and a son of Canadian immigrants to the U.S., has produced a personable, chatty account of his observations during four years in this much-overlooked country, which has quietly become the U.S.'s most important trade partner and is its geopolitical roof.

Few will read his book without learning something about Canada. But they may not learn as much as they would hope to. 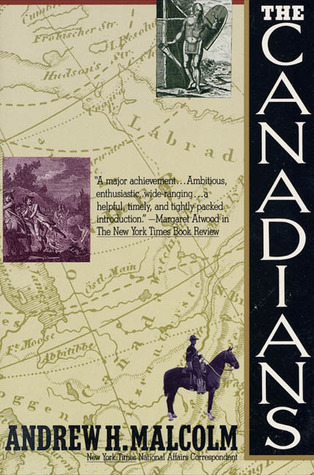 The publicity handout accompanying "The Canadians" (Times Books, 358 pages, $17.95) suggests that it belongs to an established genre of books by New York Times reporters who have worked in foreign countries: Hedrick Smith's "The Russians," Fox Butterfield's "China: Alive in the Bitter Sea," Alan Riding's "Distant Neighbors." But Mr. Malcolm is much less ambitious than his colleagues. He is a reporter, not an analyst.

Furthermore, while Mr. Malcolm was finishing this book, his task was greatly complicated by the extreme uncertainty about when Prime Minister Pierre Trudeau's unpopular Liberal federal government would call a general election. Last September, by which time it was too late for Mr. Malcolm to take account of the fact, the Progressive Conservative Brian Mulroney had become prime minister, and virtually every aspect of Canadian politics had changed.

In "The Canadians," Mr. Malcolm has sidestepped the problem of being scooped by the rush of Canadian history. He ignores national politics almost completely. Instead he writes about whales, huskies and the various Canadians he met during his extensive travels, particularly in the north, a region that obviously fascinates him. He also provides a solid if less than fascinating summary of Canada's interlocking corporations and their takeover adventures, and he offers some details about interaction between the U.S. and Canada.

Some readers might wonder about the cosmic significance of Mr. Malcolm's 10-page account of a dog-sled expedition he undertook in northern Alberta, or his four-paragraph recollection of frequent automobile trips with his parents from Cleveland to Toronto in the late 1940s. But countries are not made of institutions and economic factors alone. Mr. Malcolm's evocation of Canada's ruthless, thrilling cold, or the civility and cleanliness of its cities, conveys some flavor of Canadian life that a purely political observer might have missed.

Nevertheless, there are limitations to Mr. Malcolm's approach. He is not an ideological man, but he seems generally to accept the conventional attitudes of liberals on both sides of the border. "It is not uncommon in Canada to hear racial comments," he says piously. "I was talking with a Mountie in Frobisher Bay in the Northwest Territories one day when he said, 'The Inuit are good people but they are so lazy.'" If this kind of talk is to be considered racist, all generalizations about anybody become suspect or impossible to make. In talking about Canada's native peoples, however, Mr. Malcolm sensibly manages to make his own generalizations—which are uniformly positive.

His own oversensitivity to the problems raised by ethnic differences leads Mr. Malcolm to commit a classic error. He treats Canada as a cultural unity, although a quarter of its population speaks French and is massed in the province of Quebec. Curiously, though, his comments show he has indeed noticed the minimal communication between Canada's founding language groups, as well as the intense regionalisms, verging on nationalisms, throughout the rest of the country. But he draws no conclusions about all this.

In short, Mr. Malcolm reflects the Toronto-Ottawa-Montreal Establishment consensus, an even more pervasive phenomenon than its American equivalent on the Eastern Seaboard. Typically, he says nothing about the federal bilingualism policy, an extraordinary piece of social engineering that effectively excludes the vast majority of Canadians who are unilingual from high public office and will inevitably encourage the growth of a stratified class system. And he repeats the theory popular in Ottawa that the National Energy Program was in the interest of the whole country, although in effect it allowed the East to expropriate the oil wealth of the rebellious Western provinces.

Mr. Malcolm's underlying assumption that Canada is "maturing" as a nation and drifting away from the U.S. is equally questionable. This claim is the great cliche of Canadian nationalist polemics, and has been made at intervals throughout this century. Canada's new Tory government has in fact showed renewed interest in complete free trade with the U.S. There is more to Canada than Mr. Malcolm saw, or managed to convey.

Mr. Brimelow, who writes for Barron's, is completing a study of Canada for the Manhattan Institute for Policy Research.