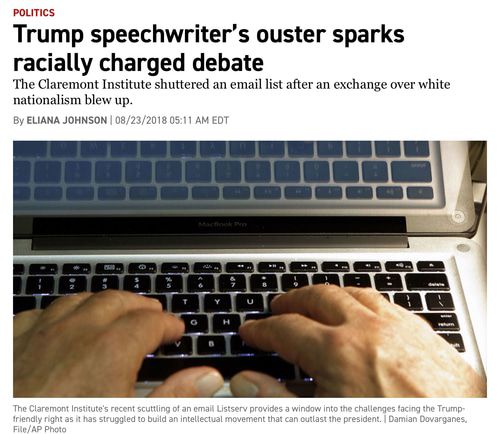 The latest item on the firing of Darren Beattie for having spoken at a conference where Peter Brimelow spoke, involves people being afraid to be on an email list with people who might defend either Beattie or Brimelow (emphases added in bold below):

It took just 80 minutes after racially incendiary emails started flying for the Claremont Institute, a conservative think tank, to shut down an email Listserv connecting hundreds of high-profile conservatives.

The emails that sparked the controversy began ricocheting midday Tuesday, in response to a plea from Darren Beattie, a recently fired speechwriter for President Donald Trump, for “those on this list with media influence” to come to his defense. The White House over the weekend dismissed Beattie after CNN revealed that he had spoken at a conference alongside a racial provocateur.

Charles Johnson, an alt-right provocateur and Trump loyalist, was first to respond.

“Beattie’s offense is that he spoke at an event where — gasp! — there were white nationalists afoot!” Johnson wrote the group. “Heaven forbid that some thinkers — like the American founders who favored our country be majority white — think that the U.S. of A should stay majority white! Perish the thought. Can’t have that.”

A little more than an hour later, as senior administration officials and white-shoe lawyers asked to be removed from the list, the Claremont Institute had scuttled it entirely.[More]

The "racial provocateur" is supposed  to be Peter Brimelow. Charles Johnson (of GotNews.com fame) is also a provocateur, apparently. Is this something only right-wing people can be? And the quoted matter above is all the evidence of racially inflammatory material that's contained in the Politico story. (To its credit, Politico does link to us, and quote James Kirkpatrick's article on the Beattie firing.)

I think it's important to get some facts down and then explain to the others here why Darren [Beattie] is exactly right about the dangerous precedent these sorts of attacks on Trump supporters pose and why we in the Claremont family should defend our own.

CNN got wind of Darren's speech and harassed the White House, particularly the #NeverTrump pressman Raj Shah, until he was fired.

Beattie's offense is that he spoke at an event where -- gasp! -- there were white nationalists afoot! Heaven forbid that some thinkers -- like the American founders who favored our country be majority white -- think that the U.S. of A should stay majority white! Perish the thought. Can't have that. (Of course neither Derbyshire nor Brimelow are white nationalists but that's for another time. White nationalist is the new communist or witch, if you want to go back further.)

That's a fairly important omission on POLITICO's part. Reminiscent, in fact, of Huffington Post's claim that Peter Brimelow "has described himself as a believer in “racial nationalism.” (What he actually told Slate's Osita Nwanevu: "Yeah, my heart is with civic nationalism, but my head is with racial nationalism. Because I think that’s the way things are going—I think the country is precipitating out on racial lines. Don’t you?")

And Charles Johnson went on to make this point to a Claremont interlocutor:

The two men in question that CNN targeted … are John Derbyshire and Peter Brimelow. Both men have appeared in the pages of the Claremont Review of Books, far from being, as you write "thoroughly discredited by every respectable conservative thinker and publication in the country."

Is Claremont now supposed to disavow its contributors too?

And what about you, [omitted]  You write on your website that your work has been featured in the "prestigious Claremont Review of Books." I assume your resignation will be forthcoming.

I kid, of course, but this is where the "logic" of no platforming ends. If it hasn't targeted you yet it's probably because you [omitted]haven't really done much interesting with your life…Know that when you do and you are targeted for your associations or ideas we will have your back.

It's true that John Derbyshire has written many pieces for CRB, and I know that Peter Brimelow has appeared in their letter columns as well. Also, Peter Brimelow spoke at Claremont College when his education book came out (2003) and also in 1995, debating the issues in Alien Nation with Sanford Ungar.

Here's a quote from a Frederick Lynch review in 2004:

Journalist Peter Brimelow warned nearly a decade ago that the "bland bargain" on immigration between Republicans (who want cheap labor) and Democrats (who hope to harvest immigrant votes) would balkanize America and imperil the future of the Republican Party. Brimelow's once-controversial arguments in his book, Alien Nation, now pale in comparison to developments we see every day in the news.

All this is true, and it means since Claremont has this long history of Brimelow/Derbyshire involvement, that instead of just shutting down a listserv, the Institute should instead burn itself down, and sow its own foundations with salt in fitting penance. (Or alternatively, come to its senses.)