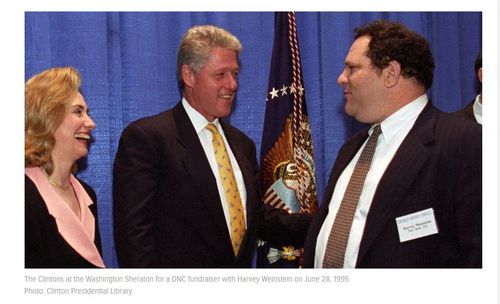 A New York Times article on Weinstein's court appearance noted how the "ground shifted" last year, finally ending the "code of silence" surrounding powerful men. Why "last year," if this has been going on for decades?

The article explained that Weinstein's power was enormous, his connections extensive and his willingness to play dirty without bounds. Did Harvey lose his money and connections "last year"?

The liberal protection racket for sexual predators was always intimately intertwined with the Clintons. The template used to defend Bill Clinton became a model for all left-wing sexual predators. They all hired the same lawyers and detectives and counted on the same cultural elites to mete out punishment to anyone who stood in the way of their Caligula lifestyles. It was Total War against the original #MeToo movement.

Even Teddy Kennedy never plotted revenge on reporters or smeared his sexual conquests as bimbos, trailer park trash and stalkers. That was the Clinton model.

The publishing house commissioned a book by John Connolly to dig into the private sex lives of the people who had helped expose Bill Clinton, e.g., the lawyers behind Paula Jones' lawsuit, Ken Starr's staff, Linda Tripp lawyer Jim Moody, Matt Drudge, reporter Michael Isikoff and so on.

Concise summary of the book: All of us were gay, except me, because I was having an affair with Geraldo Rivera.

We know this because drafts of the book, "The Insane Clown Posse," soon began to leak. Talk/Miramax's editor-in-chief Jonathan Burnham denied that any private eyes had been prying into our private lives and said he'd kill the book if it were true.

I went on "Rivera Live" and produced a letter given to me by an ex-boyfriend from a private eye looking for dirt on me:

"My office has been engaged by John C. Connolly, a writer who has performed work for Spy, New York, Premiere, Vanity Fair and a few other magazines. The project for which my services were engaged deals with January 16th, 1998, the day Monica Lewinsky was corralled by the office of the independent counsel. Mr. Connolly has described the goal as 'a day in the life of'-type book, and to that he has directed me to conduct interviews and look into the background and activities of a few peripheral characters, including the author of 'High Crimes and Misdemeanors,' one Ann Coulter.

As a result, the book was killed. But what if my ex hadn't given me that letter?

No one cared about any of our private lives. The only point was to humiliate anyone who hadn't endorsed Clinton's treatment of women as his sexual playthings.

There were plenty who did.

"He takes no for an answer," Steinem explained. Whether he was groping Kathleen Willey in the Oval Office or dropping his pants for Paula Jones in the Excelsior Hotel, she said, Clinton "accepted rejection."[Feminists And The Clinton Question, By Gloria Steinem, March 22, 1998]

Soon thereafter, we found out about Juanita Broaddrick.

As Bob Herbert wrote in The New York Times, the reaction of the feminists to Clinton's predatory behavior "can most charitably be described as restrained." (This was when the Times was still an occasionally serious newspaper.)

Not one Senate Democrat voted to remove Clinton from office for various felonies related to his sexual assaults.

The message was clear. Liberal men got a pass for any sexual misconduct, even rape. But woe be to those who accused them. (Even last year, NBC News was still following the old rule: It fired Ronan Farrow rather than publish his Weinstein expose.)

Recall that Weinstein's reaction to the accusations against him was to say: "I've decided that I'm going to give the NRA my full attention. I hope Wayne LaPierre will enjoy his retirement party. I'm going to do it at the same place I had my Bar Mitzvah."

It's hard to avoid the impression that a big part of the reason Weinstein was finally exposed is that the Clinton machine is dead. Trump killed it. Would anyone have called out Weinstein if his good friend Hillary Clinton were "Madame President"? I doubt it. The Clinton protection racket would have gone on and on and on.

After years of feminists excusing sexual predators, once the Clintons were out of the way, the dam broke. There was no reason to keep humiliating themselves by defending the indefensible.

The Worst Generation has flatlined. There are no more Clintons to save. But as absolutely intellectually convinced as I am of the Clintons' demise, I'd feel a lot better if someone would keep a wooden stake handy.