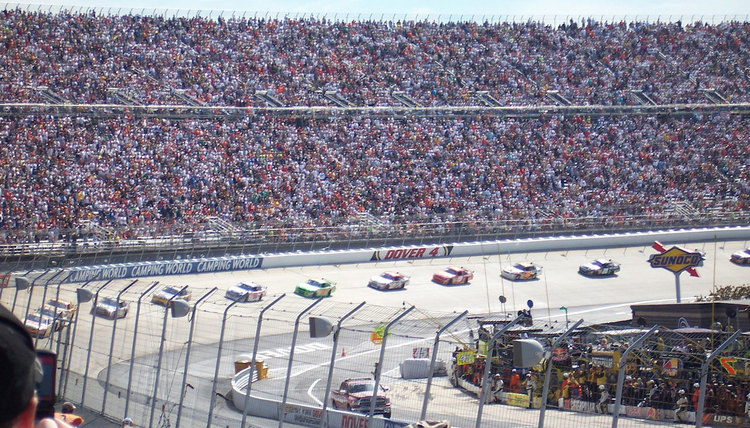 I was long baffled by the enormous, ever-growing popularity of the NASCAR stock car racing circuit. Why is watching Chevies go around and around … and around some more … so incredibly popular?

Finally, some readers pointed out that the answer was staring me in the face: because white American guys always win. Heck, the drivers are almost all British-Americans with a sprinkling of German-Americans like the Earnhardts.

After that, I started to notice that some other institutions were in the business of providing covert identity politics for people who aren't allowed to practice identity politics publicly. Indeed, that perspective provided a novel answer to a couple of questions that a lot of people are asking:

"Why do Republicans win so much these days? But why do they then so seldom use their power to do anything recognizably conservative?"

Admittedly, this new theory is more subjective than my recent quantitative articles in VDARE.com and The American Conservative explaining the 2004 red state - blue state gap: "The Baby Gap," "The Marriage Gap," "The Mortgage Gap," and, underneath it all, "The Dirt Gap."

I guess you can call this one the White Guy Gap.

I suspect that liberals are now paying the price for decades of insulting white men. White males make up about one third of the population, but the problem with white guys, from a liberal perspective, is that they happen to be the people who get most of the big things done in this country.  That's just unfair, no, that's downright evil of them.

Now, white men are probably the most tolerant and forbearing of any American group—they've been raised to take it like a man—but they are also only human. So, when they finally do get mad, they are a formidable force.

And, increasingly, the Republican Party has become a covert exercise in identity politics for white men.   A peculiarly ineffectual exercise because of the Republican determination to camouflage this fact by promoting policies that obviously do white men no good.

Because white men are, on average, the best team players, the best organizers, and the best managers in America, the Republicans are now consistently beating the Democrats in the blocking and tackling departments of politics, even when the Democrats are closer to objectively correct on issues like the Bush Administration lying the country into the War in Error. The GOP can draw on more—and more motivated—white male talent.

The Democrats are largely run by white men, too—70 percent of Democratic Senators, for example, are non-Hispanic whites, even though George W. Bush beat John Kerry 62-37 among that demographic.

But to be a liberal these days, white guys have to be a little self-hating because these poor bastards know they are automatically suspect and unappreciated by much of their own Democratic Party.

"Not to get too obsessed by the whole Estrich-Kinsley thing, but so far no one has attempted any kind of real answer to Estrich's question: why are op-ed pages so completely dominated by men?"

"I suppose the obvious response is that it's for the same reason that practically every other elite profession is dominated by men: we still live in a male-dominated society and probably will for at least another century."

But Drum went on to mischievously point out:

"The political blogosphere provides another clue. … there are still no formal barriers to entry here, no old boys club in the usual meaning of the word. Yet if you take a look at the Blogosphere Ecosystem, which for all its faults is probably the closest thing we have to a consensus measure of popularity for political blogs, you will find exactly three women in the top 30: Michelle Malkin, La Shawn Barber, and Michele Catalano."

"And that nearly led to his eyes being clawed out," reported Howie Kurtz in the Washington Post, as obscure women bloggers denounced Drum in the most vicious terms imaginable, causing Drum to cravenly shill for these talentless harridans.

To be a liberal white male, it helps to be a masochist.

So, the white men the Democrats do attract tend to be less effective than the more straightforward white guys who make the GOP political machine tick, and who have built from scratch a massive alternative media machine.

There's nothing unnatural about the people who keep the country running wanting to have a large say in running the country. The problem, though, is that white male identity politics is the self-love that dares not speak its name.

So, many Republican white men studiously avoid endorsing policies that would actually help white male Republicans, such as immigration restrictions. They are too intimidated by fears of being accused of bias in favor of themselves. Of course, every other group in America is free to be flagrantly biased in favor of its own members' welfare, but white males aren't allowed that freedom.

So, instead, Republican white men meekly accept their leaders' Invade-the-World-Invite-the-World policies to show how unprejudiced, how self-sacrificing they are. They send their sons to die in Iraq so that some medieval anti-American Ayatollah can win an election. Bush and Rove push affirmative action at colleges and flooding the country with immigrants to prove that their party isn't really what it obviously is: the white guy's party.

Look how many white Republican men back the racial quota-supporting and obviously unqualified Condoleezza Rice for President in 2008 as part of their Sisyphean struggle to prove to the world that they don't favor themselves.

From Rove's point of view, this all makes a certain amount of twisted sense. The more insults get piled upon white men by the immigration-driven growth of the diversity industry, the more motivated they are to practice identity politics of their own through the Republican Party. And the more the Republican leadership betrays its main base, the angrier that base gets - at the Democrats.

It's a political perpetual motion machine.