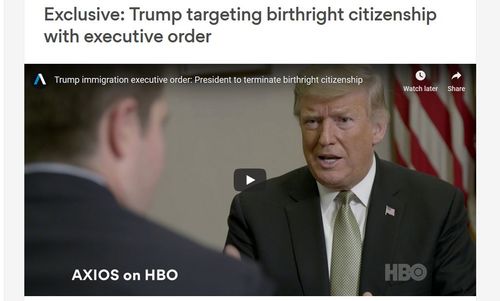 President Trump plans to sign an executive order that would remove the right to citizenship for babies of non-citizens and unauthorized immigrants born on U.S. soil, he said yesterday in an exclusive interview for "Axios on HBO," a new four-part documentary news series debuting on HBO this Sunday at 6:30 p.m. ET/PT.

Here at VDARE.COM, we’ve been writing about this subject for years. For one example, see my Memo From Middle America: Trump Says “Eliminate Anchor Baby Loophole”—Texas May Have Begun!, and more by me here.

This would be great news. More from Axios…

This would be the most dramatic move yet in Trump's hardline immigration campaign, this time targeting "anchor babies" and "chain migration." And it will set off another stand-off with the courts, as Trump’s power to do this through executive action is debatable to say the least.

Of course, we can expect a court battle, and protests, and attacks and distortions in the media, and all sorts of ugly invectives hurled at those disagree with the current insane anchor baby policy. Of course we can expect all that and more.