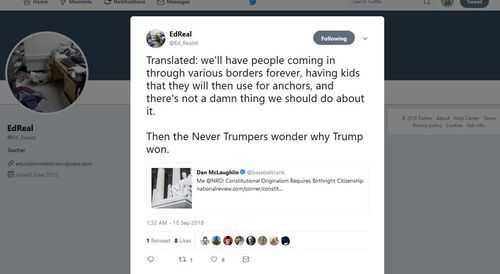 Here's the impression NRO is still making on normal people:

Translated: we'll have people coming in through various borders forever, having kids that they will then use for anchors, and there's not a damn thing we should do about it.

Then the Never Trumpers wonder why Trump won. https://t.co/v1px7wXXIJ

Leaving aside the actual legal argument (the "1982" link is to what we've called the "disastrous (and eminently reversible)1982 Plyler v Doe decision") how is this originalism?

It's sentimental cuckservatism. The most un-Originalist (and unoriginal) thing in it, is the reference to "our American creed". The "American Creed" is not a thing, it doesn't exist. The Constitution does.

Education Realist is right—this is how you get more Trump.