Earlier by Ann Coulter: The History Of Sex In America, Part 1–Lying About Clarence Thomas 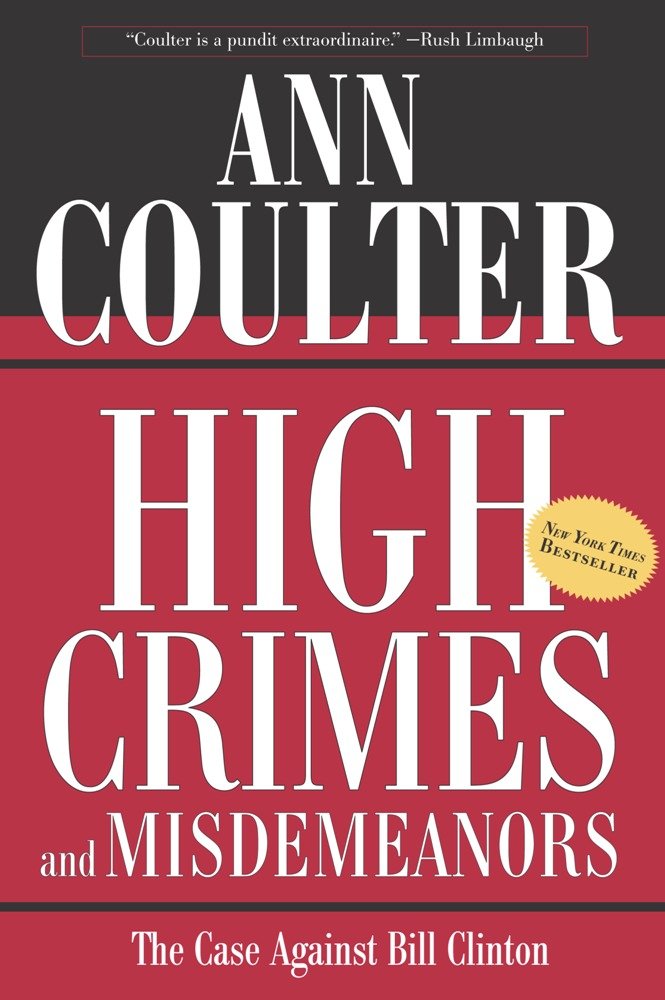 At least liberals are finally telling the truth about Bill Clinton—and just 20 years after it mattered! Of course, considering it took the Democratic Party a century to discover that slavery was wrong, two decades is lightning speed for these moral paragons.

While edging up to admitting that Bill Clinton maybe shouldn't have raped Juanita Broaddrick and flashed Paula Jones, liberals still can't own up to their utterly hypocritical defense of a president credibly accused of repeated sexual assaults and associated felonies.

Here are three important differences off the top of my head:

1) Anita Hill's accusations against Thomas involved words—just words—whereas Clinton was accused by multiple women of being a sexual predator on a scale to rival Harvey Weinstein. 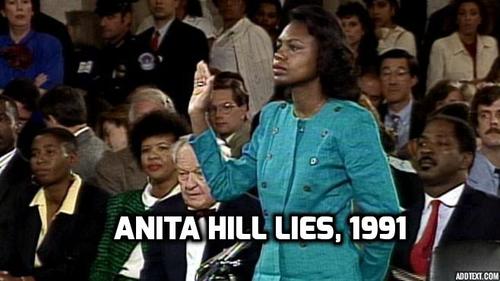 2) The evidence against Thomas consisted of a single accuser, with no corroborating witnesses. The evidence against Clinton included, among other things, multiple witnesses; contemporaneous corroborating witnesses; secretly recorded confessions of the assaults and liaisons from Clinton himself (the Gennifer Flowers tape), Monica Lewinsky (Linda Tripp tapes) and Juanita Broaddrick (two separate tapes by people who wanted her to tell the truth about the rape); a DNA-stained dress; and, eventually, when he had absolutely no other choice, Clinton's own admission under oath.

3) As Dowd says, the left was using Hill's made-up charges against Thomas to save Roe v. Wade. By contrast, it's absurd to imagine that Republicans were enraged by the policies of President Clinton—a neoliberal, Third-Way, welfare-reform-signing, Ricky Ray Rector-executing Democrat. Clinton was the last of a vanishing breed, the moderate Democrat. That just wasn't a good enough reason to overlook his repeated sexual assaults, felonies and bald-faced lies.

It was liberals, and only liberals, who did an about-face on everything they supposedly believed about sexual harassment for political gain. The exact same people who had pretended to need smelling salts when told Thomas had joked about "Long Dong Silver" in the offices of the Equal Employment Opportunity Commission (never happened) were suddenly A-OK with a governor summoning a lowly state employee to his hotel room, dropping his pants and saying, "Kiss it."

The erstwhile lynch mob against Clarence Thomas was fine with a presidential candidate using his campaign staff (including ABC's George Stephanopoulos) to squelch "bimbo eruptions."

Liberals were totally copacetic with the president of the United States using the full power of his office to smear his victims as liars, bimbos, trailer park trash and—in the case of Monica Lewinsky—a "stalker."

No correction to Steinem's pronouncement was issued days later when news of Juanita Broaddrick's rape charge against Clinton began to circulate.

(If you doubt that the media are run by the totalitarian left, note that Steinem's op-ed has been wiped from the Times' archives. So I guess liberals do know how to wipe hard drives!) [VDARE.com note: Truncated reprint version on the NYT site here, full version posted at Scribd.]

Clinton was impeached for perjury and other felonies he committed to defeat Jones' sexual harassment claim against him. Not one Democrat in the Senate voted to remove him from office. Not one.

As a consequence, the rule on sexual assault at least since Teddy Kennedy drowned Mary Jo Kopechne was this: Liberals were free to grope, rape and drown women and to smear them and their defenders. But conservatives, lacrosse players, fraternity members, pompous Fox News hosts and other objects of liberal hate would be destroyed at the slightest hint of any sexual impropriety, whether true or comically false.

What didn't matter: The nature of the charge, credibility of the accuser, use of force, contemporaneous witnesses, photographic evidence, DNA evidence ...

What mattered: Who's the accused?

It would be as if pollution laws were enforced only against companies with Republican CEOs. Oh! It's Harvey Weinstein's firm? My mistake—go ahead, dump toxic chemicals into this pristine river.

That's why the most shocking revelation to emerge from The New York Times' expose of Weinstein last month was that it was published at all. Least shocking was that, before Ronan Farrow took his detailed account of Weinstein's assaults to The New Yorker, NBC killed the story.

Also unsurprising: Soon after refusing to publish Farrow's report on Weinstein, NBC was frantically peddling a letter by "Saturday Night Live" staffers defending Franken from his own multiple groping incidents. (It's looking like the best way to defend Roy Moore would be to allege that Democratic Sen. Al Franken once fondled 14-year-olds.)

Still, with the Times' expose of Weinstein, for the first time in 20 years, liberals have finally begun to notice the prodigious abuse of women by liberal men—other than Al Franken, of course.

Perhaps the day is not far off when we will have ONE standard for both liberals and the people liberals hate. A girl can dream!