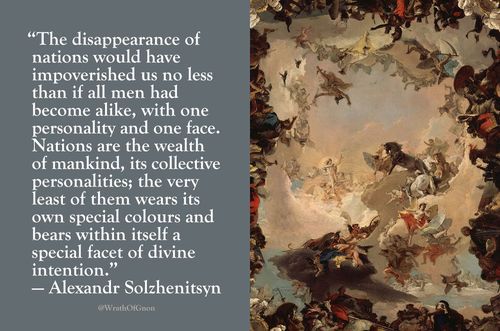 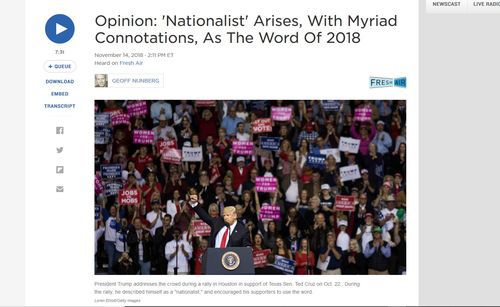 Nationalism is definitely a Thing right now—so much so that National Public Radio on November 14th declared "nationalist" to be the Word of the Year for 2018. [Opinion: 'Nationalist' Arises, With Myriad Connotations, As The Word Of 2018, by Geoffrey Nunberg, November 14, 2018]

Nationalism is highly relevant to our mission here at VDARE.com: to promote thoughtful, well-informed discussion of the U.S.A.'s National Question, with special attention to issues of demographics and foreign settlement.

I have to say I find Macron deeply unimpressive. None of his recorded remarks has struck me as very intelligent or memorable. The French themselves seem to agree with me: Macron's party is polling poorly, below twenty percent—behind Marine Le Pen's nationalists. [French far-right overtakes Macron in EU parliament election poll, by David Chazan, Financial Times, November 4, 2018] 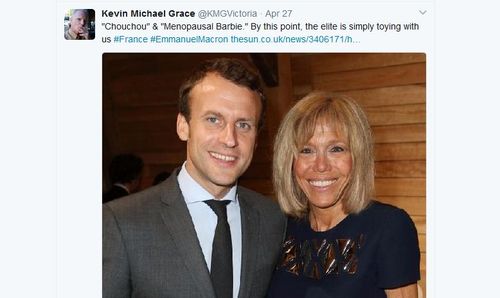 It's characteristic of mediocrities like Macron to be in thrall to the shallow clichés of the generation that came before them. For Macron in particular to be in thrall to the generation before him would actually be less surprising than the average, as he is married to a member of that generation. Mrs. Macron's generation is also mine, more or less—she is eight years younger than I am—so I can speak with authority about those shallow clichés that were in the air during the decades after WW2.

One of those clichés was that while patriotism was good, nationalism was bad. Patriotism, the talking heads all told us in 1960 and 1970, was the warm, loving feeling you have for your country, with no malice or prejudice against anyone else's country. Where there was such malice—or disdain, or contempt, or aggressive intentions—that was nationalism.

So nationalism was patriotism with attitude.

That was what all Goodthinking people believed through my young adulthood, and Mrs. Macron's. It's not hard to figure why we believed that. The aggressor powers in WW2, Germany and Japan, had state ideologies of militaristic imperialism, of which nationalism was undeniably a component. Setting out to conquer Europe and Asia, the Germans and Japanese felt justified in doing so because their nations were best.

Nationalism-wise, there's a contradiction in there, though. As militaristic imperialists, the Germans and the Japanese had no time for anyone else's nationalism. They both knew, as imperialists have known since civilization began, that nationalism is the bane of imperialism.

The Germans and Japanese who fought WW2 were not fans of Polish nationalism or Korean nationalism. They strove very mightily and brutally to extinguish those nationalisms. They were imperialists. Nationalist impulses may be harnessed by imperialism, but imperialism is fundamentally anti-nationalist. Ask a Tibetan.

So the conventional wisdom of 1970—patriotism good, nationalism bad—while it was understandable after the mid-century horrors, left much unsaid.

Now the things then left unsaid are being said. Here am I saying some of them.

So what does distinguish patriotism from nationalism?

One answer: nothing. The words "patriotism" and "nationalism" are synonyms.

If true, that's kind of annoying. Why cumber ourselves with two words for the same thing? I am anyway resistant to it. Cyril Mortimer taught my primary-school class back around 1955 that there are no true synonyms; that even words closely related in meaning have different shades of color, different usages and connotations. Mr. Mortimer was right.

But then, if—contra President Macron—if there is a healthy and harmless style of nationalism, with nothing negative in it towards other nations, how does such a nationalism distinguish itself from attitude-free patriotism?

I would seek the answer in the complexity of our feelings about our nation and others. Let me offer some literary references.

Breathes there the man with soul so dead

Who never to himself hath said

Definitely patriotic, right? No attitude there, right? We-ell … Read the whole poem. [Lay of the Last Minstrel, Canto VI, [My Native Land] There's a depth of feeling there that I think goes beyond once-a-year salute-the-flag bland patriotism.

Discussing this topic with a learned friend, she told me something about the situation here in the U.S. that I hadn't heard before: In the names of organizations, she said, the word "national" has generally been preferred by the political Left, while the Right favors the word "American."

But a different friend, he observed that two of this country's leading political magazines both have "nation" in the title: The Nation on the left but National Review on the right!

Patriotism; nationalism; left; right; at this point my head's beginning to spin.

Let me just step back and see if I can extract some final sense from all this.

First, let me express some skepticism towards the idea of a bland, harmless patriotism, with malice towards none and charity for all.

Human nature just isn't like that. To ask that I have a strong love for my country with no negativity whatsoever towards other countries, is to ask too much.

In the vapid dualism of today's ruling ideology, according to which if you don't approve something whole-heartedly you must hate, hate, hate it, this understanding has been lost. All the intermediate emotions between swooning love and seething hate are no longer fit subjects for discussion. Mild disapproval; amused mockery; grudging tolerance; good old utter indifference; nobody has such feelings any more, according to the guardians of our state ideology. If you don't love Big Brother, you must hate him.

Back in 1940, or 1805, or 1783, we had a better understanding of our nature. When Boswell wrote that Johnson was "fully prejudiced against all other nations," nobody would have understood it to mean that Johnson wanted to invade and occupy those other nations, or persecute their citizens. He just didn't like their ways much, because they differed from the English ways he was accustomed to.

In the same letter in which Frank Richards expressed his patriotism to George Orwell, Richards also wrote the following thing:

As for foreigners being funny, I must shock Mr. Orwell by telling him that foreigners are funny. They lack the sense of humor that is the special gift of our own chosen nation.

That's patriotism, but it's not blandly neutral towards foreigners. Richards thinks they're funny. It's not neutral, but it's not aggressive. He doesn't hate foreigners, or want to enslave them. He just wants to laugh at them.

This is human nature in all its convolutions and anfractuosities. If you try to encompass it with the infantile simplicities of Cultural Marxism, you will fail.

Second: I think it comes down to this—the word "nationalism," whatever anyone thought it meant in 1970, has a new currency now because it is a handy way to refer to the opposite of globalism.

Globalism has been the grand theme of the past few decades. For one thing, globalist organizations came up after the World Wars. Some of them came up in reaction to the horrors of those wars; the United Nations most obviously. Some were products of the Cold War, like NATO. Some were originally mercantile leagues, like the EU.

For another thing, it's just gotten much easier to move around the world, and there are way more people who want to do the moving. So mass immigration from poor countries to rich ones has been rising steeply. There have been winners and losers from this. And the winners have naturally taken up a globalist outlook. 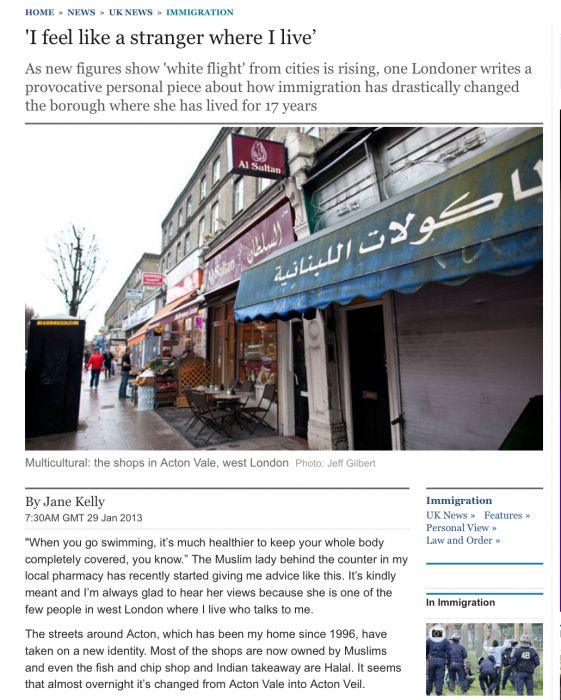 The rise of globalism has generated a reaction. Those big globalist organizations have exhibited bureaucratic arrogance, not to mention corruption. Mass immigration has depressed wages and left many people feeling like strangers in their own countries. ['I feel like a stranger where I live’, by Jane Kelly, Telegraph, January 29, 2013] This reaction needs a name, and the word "nationalism" is lying around, not much used, so we've taken it up as a name for the anti-globalist outlook.

The word "nationalism" wasn't taken up at random. Public discourse in the civilized world is controlled by globalists. They naturally want to put resistance to globalism in as bad a light as possible.

To people who don't think much, people like Emmanuel Macron, the word "nationalism" has that tinge of darkness, that frisson of Hitlery-Hitlery-Hitler that commends it to the globalists for purposes of vituperation.

There are some contradictions here that globalists would much rather you didn't think about: for example, the tricky matter of Israel.

I earlier mentioned Yoram Hazony's book The Virtue of Nationalism. Hazony  [email him] is an Israeli scholar, President of the Herzl Institute in Jerusalem. He makes the point that Israeli nationalism is in a way the archetypal nationalism, forged over long centuries in opposition to great empires: the Egyptian, Babylonian, Persian, Roman, Ottoman, and, yes, British.

It's not very surprising that Israel today is a beacon of nationalism, or that a best-selling book titled The Virtue of Nationalism should have an Israeli author.

Reading these pundits, you sometimes get the impression they were happier with the older situation, before the modern state of Israel came up, when Jews were, in the Soviet phrase, "rootless cosmopolitans." Boot, Podhoretz, Brooks, & Co. are not really against nationalism, you find yourself thinking: they're just against goy nationalism.

Well, the Jewish immigration romantics will have to find their own way out of that maze. It's their problem, not mine. I'm happy that nationalism has settled in as a Thing, that the word "nationalism" has been anointed as Word of the Year even by a CultMarx outfit like National Public Radio, and that books praising nationalism are finding a good market.

Globalism is not a contemptible idea. Of course, civilized nations should strive to get along with each other, to avoid wars, and to contain, as best they can, the non-civilized. Probably there need to be some transnational organizations to help all that along. And yes, we should try, like Frank Richards, to find something to esteem in other countries we visit.

The nations of the world are our natural homes, though. They are not, in my lifetime or yours, going to merge into a caramel-colored uniformity, speaking the same tongue, eating the same food, worshipping the same gods, laughing at the same jokes. That's a fantasy, and not a benign one.