Biden And Blacks: No Gaffe Can Threaten This Venal Relationship

See, earlier: Forget THE APPRENTICE, Trump—Blacks Will Never Vote For You Enough To Make A Difference

Joe Biden’s recent gaffe about blacks isn’t going to cost him black support. It may even strengthen him because, far from being offended, black political consultants, activists, and journalists just see more dollar signs. Whereas First Son-in-Law Jared Kushner reportedly wants to cut out the word "freedom" out of the GOP platform because “polling showed it doesn't appeal to African Americans” [Scoop: Inside the secret talks to overhaul the GOP platform, by Jonathan Swan, Axios, May 24, 2020], the Biden-black relationship is solidly based not on illusory symbols but on venal material interests. The GOP can’t compete, nor should it. 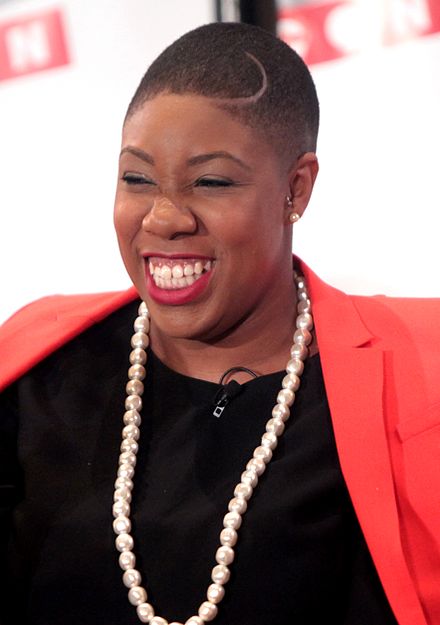 Biden won the Democrat Presidential nomination because he was endorsed by South Carolina’s Jim Clyburn and bought off black politicos like Symone Sanders, right,  the former Bernie Sanders supporter. Black Democrats support Biden because they knew he would provide specific benefits for their “community,” in contrast to the more class-based, universal policies offered by Leftists such as Bernie Sanders or Andrew Yang. Like Virginia Governor Ralph Northam, Biden’s silly persona lets him be the hapless white frontman for racial socialist redistribution programs. And now, like Northam after the blackface brouhaha, Biden will have to offer blacks even more concrete benefits to ensure their turnout.

The celebrated gaffe: In an interview with radio host Lenard McKelvey, aka “Charlamagne tha God,” Biden said if blacks have a problem figuring out whether to support him or President Trump, “you ain’t black” [Joe Biden: ‘You Ain’t Black If You Don’t Back Me Over Trump,' by Joshua Caplan, Breitbart, May 22, 2020]. Adding to the fun: Biden’s bizarre comment that “everyone in jail… can’t read,” amusing since the “tha God” spent time in jail after various crimes when he was a teenager [Five Things You Didn’t Know About Charlamagne tha God, by Aiden Mason, TVOM, 2018].

The Kushner campaign has pounced on Biden with the usual DR3 (Dems R the Real Racists) tactic, and is now selling extremely cringe T-shirts, below. 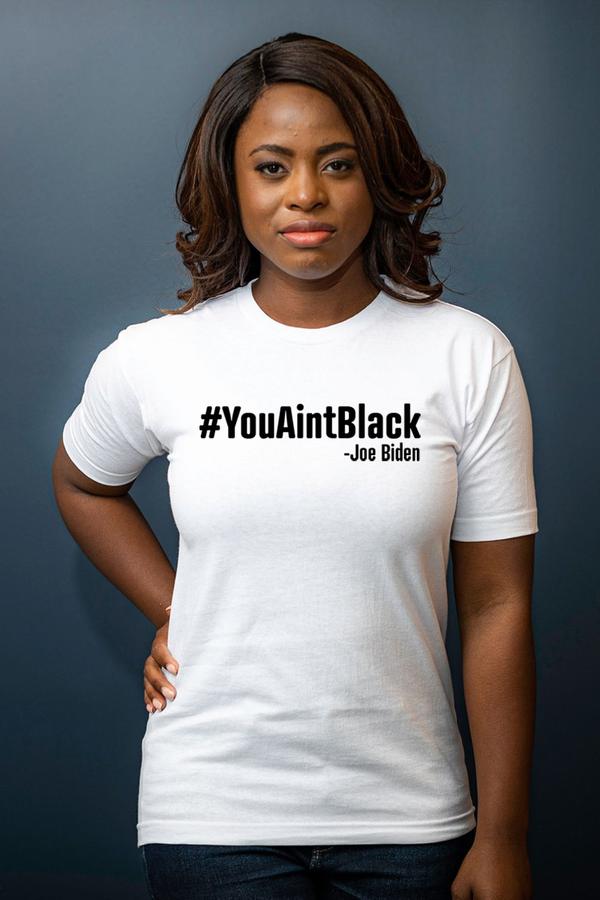 But of course this overlooks the fact that McKelvey wasn’t offended on behalf of black Republicans. “It don’t have nothing to do with Trump, it has to do with the fact—I want something for my community,” he responded to Biden.

In other words, there’s no chance most blacks will consider voting for Trump. But they do want more handouts for their group.

McKelvey, excuse me, “tha God,” pressed Biden on “what have you done for me [blacks] lately” and condemned him for the 1994 crime bill [Charlamagne tha God slams Joe Biden’s record with African Americans after the Democrat’s ‘ain’t black’ gaffe and says his 1994 crime bill was a ‘very intricate’ part of ‘systemic racism,’ by Matthew Wright and Nikki Schwab, Daily Mail, May 23, 2020]. Joe Biden promptly groveled, vowing that “I’ve never, ever taken the African American community for granted” [Joe Biden Regrets ‘You Ain’t Black Comment: ‘I Shouldn’t Have Been Such A Wise Guy,' by Joshua Caplan, Breitbart, May 22, 2020].

But he has and he can. Thus Symone Sanders, running interference for the former VP, tweeted that his comments were “in jest” and that he could put “his record with the African American community up against Trump’s any day,” steamrolled Chuck Todd’s attempt to question her about it on Meet The Press  [Symone Sanders vs. Chuck Todd on Biden’s “You Ain’t Black” Comment; “I’m Not Going To Do This," by Ian Schwartz, RealClearPolitics, May 23, 2020].

Former president Barack Obama is preparing to campaign for Biden to drive up black turnout [Barack Obama poised to add his star appeal to Joe Biden campaign, by Daniel Strauss, The Guardian, May 23, 2020]. And fears that blacks might stay home if they feel Biden hasn’t done enough for them lately can be countered if necessary by choosing a black woman female VP candidate, like Florida Congresswoman Val Demings [Val Demings rips Trump for having the "gall" to use Biden remarks in campaign, Axios, May 24, 2020] or Georgia’s Stacey Abrams.

Biden’s weakness is his strength. Like Virginia’s Northam, he can’t rule his party without monolithic black support [Joe Biden, the National Northam, by Gregory Hood, American Renaissance, March 6, 2020]. But that means black Democrats like Clyburn will support him because Biden must deliver. Blacks vote as a bloc and win concessions as a bloc.

Consider what Biden has already done before this. He began his campaign running on the Charlottesville hoax that alleges far-right protesters attacked the city and President Trump praised them. Biden has said abandoning Anglo-American legal culture and its presumption of innocence has “got to go” because it’s a “white man’s culture.” He’s more recently said Ahmaud Arbery was “killed in cold blood.”

Biden is going to give blacks everything he thinks they want as long as he gets to be president. President Trump was absolutely right when he defined Biden as an empty shell, a “non-factor,” and said that his real opponent was the radical Left and its Main Stream Media allies [Trump dismisses Biden: ‘Not even a factor,’ by Tal Axelrod, The Hill, May 16, 2020].

Still, why don’t the Democrats have a black person at the top of the Democratic ticket? Because Joe Biden provides a way to soothe the moral panic that older liberal whites are undergoing. It’s not surprising he leads in critical suburban communities [Where Biden, Trump stand in key swing states, by Jonathan Easley, The Hill, May 23, 2020]. Biden’s own personal failings, including plagiarism, allegations of corruption, and, most recently, sexual assault, don’t matter without the MSM covering them aggressively. Thus The Nation’s Katha Pollitt openly states she’d vote for Biden even if “he boiled babies and ate them” or if Tara Reade’s account of sexual harassment was true [We Should Take Women’s Accusations Seriously. But Tara Reade’s Fall Short, May 20, 2020]. Feminists had no problem voting for Bill Clinton or his enabler Hillary; why would they object to Biden?

If anything, Biden’s creeping senility, bumbling, and overall buffoonery are endearing to white liberal voters who want to go back to the “normality” of the Obama years when the president was just another celebrity. I suspect Biden was picked by Obama because he’s an oaf, the dumb white sitcom dad we’ve seen on television a million times. He’s got a certain charm, but no one respects or fears him.

There is no white “community” in American politics conscious of itself as a group possessing collective interests and identity. The pollster Zach Goldberg has found that white liberals actually possess an “out-group bias”—meaning that they dislike their own ethnic group more than any other. In academia, journalism and increasingly, “white” is an all-purpose insult. The only qualification: Many of these white liberals don’t identify with whites anyway, either because they are part of an ethnic group that considers itself distinct from whites (like many Jews); an oppressed group (like some sexual minorities); or are genuinely post-national (and think they’re citizens/consumers of the world).

Notwithstanding the constant denunciations of President Trump as a white nationalist, the fact is he never speaks explicitly in defense of his white supporters. He’ll occasionally send out what appears to be a dog whistle, as when he cryptically referenced the savage beating of a helpless elderly white man by a younger black man in a nursing home in Michigan. But his supporters are learning that there will be no political consequences from this dog whistle. There’s no push to eliminate Affirmative Action or establish Official English. Even Trump’s recent boast that he was going to remedy the “illegal” bias and deplatforming of patriots on social media is apparently just means is a “commission”—which is still being “considered” [Trump Considers Forming Panel to Review Complaints of Online Bias, by John McKinnon and Alex Leary, Wall Street Journal, May 23, 2020].

Arguably, the GOP could move to the left and propose a civic nationalist program that might well win a few more black votes than the GOP is getting now: a universal basic income, an immigration moratorium, Official English and replacing Affirmative Action with a system that gives advantages to those from a lower economic class

In other words, challenge the Democrats for black voters by offering them something real.

But we know the GOP won’t do that—not least because Conservatism Inc. ideologues would fight it every step of the way. Better to lose and have some other black conservative we’ve never heard of lecture us on “Republican outreach” again next CPAC.

In contrast, Democrats provide blacks with concrete advantages like set-asides, special programs, ethnic narcissism, and cultural victories. Why would blacks give that up? Once in a while, they might throw a minor tantrum to win more subsidies, but it’s not like a party that wants “limited government” can offer anything to people that rely on government being big.

Let the Kushner campaign sell its shirt. It won’t make a difference. Blacks will vote for Biden this fall by the usual margins, if not greater ones than last time.

Joe Biden has already shown he’s willing to degrade himself as much as he has to in order to be president. Kissing up to “Charlamagne da God” is just business as usual.