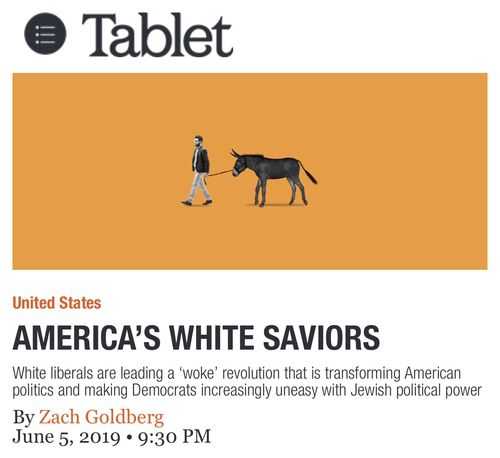 For some time, I’ve been impressed with the tweets of a grad student named Zach Goldberg, who creates some of the more illuminating graphs about The Current Year. Zach now has a general article in The Tablet on his quantitative findings on The Great Awokening:

A sea change has taken place in American political life. The force driving this change is the digital era style of moral politics known as “wokeness,” a phenomenon that has become pervasive in recent years and yet remains elusive as even experts struggle to give it a clear definition and accurately measure its impact. Where did it come from? What do its adherents believe? Is it just something happening inside the Twitter bubble and on college campuses or is it really spreading across the social and cultural landscape and transforming the country as sometimes appears to be the case? In reality, “wokeness”—a term that originated in black popular culture—is a broad euphemism for a more narrow phenomenon: the rapidly changing political ideology of white liberals that is remaking American politics.

Over the past decade, the baseline attitudes expressed by white liberals on racial and social justice questions have become radically more liberal. In one especially telling example of the broader trend, white liberals recently became the only demographic group in America to display a pro-outgroup bias—meaning that among all the different groups surveyed white liberals were the only one that expressed a preference for other racial and ethnic communities above their own. As woke ideology has accelerated, a white liberal minority has pulled away from the average opinions held by the rest of the coalition of Democratic voters—including minority groups in the party. The revolution in moral sentiment among this one segment of American voters has led to a cascade of consequences ranging from changes in the norms and attitudes expressed in media and popular culture, to the adoption of new political rhetoric and electoral strategies of the Democratic Party. Nor has this occurred in a vacuum on the left as the initiatives set in motion by white liberals have, in turn, provoked responses and countermeasures from conservatives and Republicans.

In a recent Vox article based partly on the dissertation research I’ve been doing as a Ph.D. candidate in political science at Georgia State University, Matthew Yglesias described this ongoing transformation as “The Great Awokening.” In Yglesias’ account: “In the past five years, white liberals have moved so far to the left on questions of race and racism that they are now, on these issues, to the left of even the typical black voter. This change amounts to a ‘Great Awokening.’” There is no simple or single explanation for how this process got started. It appears to be driven by an interplay of factors: preexisting tendencies among white liberals; a series of polarizing events like the police shooting of Michael Brown and subsequent riots in Ferguson, and the migrant crisis; the rise of millenials as a political force, and the explosion of social media and “woke” clickbait journalism. The years between 2012 and 2016 were a watershed for white liberal racial consciousness. But the seismic attitudinal shifts of those years have implications that go beyond race: They are also tied to a significant decrease in support for Israel and—perhaps more surprisingly—a rise in the number of white liberals who express negative attitudes about the perceived political power of American Jews.

At the same time, there are growing levels of support for policies without such obvious connections to race. For instance, between 1965 and 2000, the percentage of white liberals preferring increased immigration levels never deviated far from 10%. From the mid-2000s to roughly the end of President Obama’s term in office, this figure gradually ascended into the 20-30% range. As of 2018, it sits at over 50%. Then, there is the marked shift in attitudes toward Israel. Between 1978 and 2014, white liberals consistently reported sympathizing more with Israel than the Palestinians. Since March of 2016, this trend has turned on its face: Significantly more white liberals now report greater sympathy for the Palestinians than for Israel.

Some of these changes arguably stem from Trump’s rhetoric and policies on immigration. But a glance at the data shows that, as with their attitudes toward blacks, the percentage of white liberals perceiving “a lot” or “a great deal” of discrimination against immigrants more than doubled between 2000 (29%) and 2013 (57%)—i.e., well before Trump arrived on the scene. Additionally, between 2006 and 2014, the percentage of white liberals saying they feel “very sympathetic” toward illegal immigrants and their families grew from 22% to 42%.