Trump’s Immigration “Moratorium”—A Millstone Could Become A Milestone With Some Tweaks. How Else Can He Win Re-Election?

Can President Trump and the GOP salvage something from the wreck of his immigration moratorium proposal? Though the details were a bitter disappointment, it may be yet turn out to be a milestone rather than a millstone. Trump officials now say that what’s in place now is only the beginning. A growing number of Republican lawmakers demand that he expand it. And Trump’s base, including the conservative commentariat, is angry. But none of this guarantees Trump will beef his Executive Order up, so immigration patriots on and off Capitol Hill must deliver a strong message.

VDARE.com has long supported an immigration moratorium. As Trump said: “It would be wrong and unjust for Americans laid off by the virus to be replaced with new immigrant labor flown in from abroad. We must first take care of the American worker.” [President Donald J. Trump Is Honoring His Commitment to Protect American Workers by Temporarily Pausing Immigration, April 22, 2020] But as a practical matter, this moratorium proposal is toothless [Proclamation Suspending Entry of Immigrants Who Present Risk to the U.S. Labor Market During the Economic Recovery Following the COVID-19 Outbreak, WhiteHouse.gov, April 22, 2020].

Jared Kushner reportedly gutted the original order, which exempted only guest-worker visas for farm and health care workers [Exclusive: Trump’s Original Order Halted Foreign Workforce Flow to U.S., by John Binder, April 23, 2020]. Now the new prohibition only limits green-card applicants, and explicitly exempts EB-5 investor-visa holders and healthcare workers. And thanks to the cloudy language, the Homeland Security Secretary can declare the “H” visa holders vital to the national interest and continue letting them pour across the border [Jared Kushner pushes back on Trump’s immigration ban, by Amber Athey, The Spectator, April 21, 2020].

Kushner, of course, had obvious conflicts of interest that the Democrats/ MSM will inevitably exploit. For example, his relatives have lobbied for more investor visas, which primarily go to Chinese oligarchs, to obtain funding for family business ventures [America Has a Jared Kushner Problem, by Pedro Gonzalez, American Greatness, April 24, 2020].

Still, the White House, and surely Trump himself, know that the current order satisfies no one.

Of course Treason Lobby Democrats and their Media Information Ministry declared the moratorium “racist” and “authoritarian,” proving once again the party cares more about foreigners than Americans and that no compromise from Trump will appease them  ['Xenophobe. In. Chief.': Democrats blast Trump's plan to suspend immigration to U.S., by Rebecca Shabad, NBC News, April 21, 2020].

Trump can ignore the Democrats. But he can’t ignore his own base, not least its leaders with a very loud voice.

"There is only one point in handing out hundreds of thousands of these visas to foreign nationals & it is to placate big business."

"If the point of this EO was to protect American jobs it failed." pic.twitter.com/XzFsoxpXbT

Significantly, Texas Sen. Ted Cruz also blasted the guest-worker exemptions. “We don’t need to be bringing in a million-plus workers when 22 million Americans are out of work,” he told Carlson [Cruz: Doesn’t Make Sense to Bring in Foreign IT Workers, Americans ‘Need to Get the Jobs,’ by Ian Hanchett, Breitbart, April 21, 2020].

Another significant figure who attacked the moratorium, albeit without naming Trump: TPUSA founder Charlie Kirk. 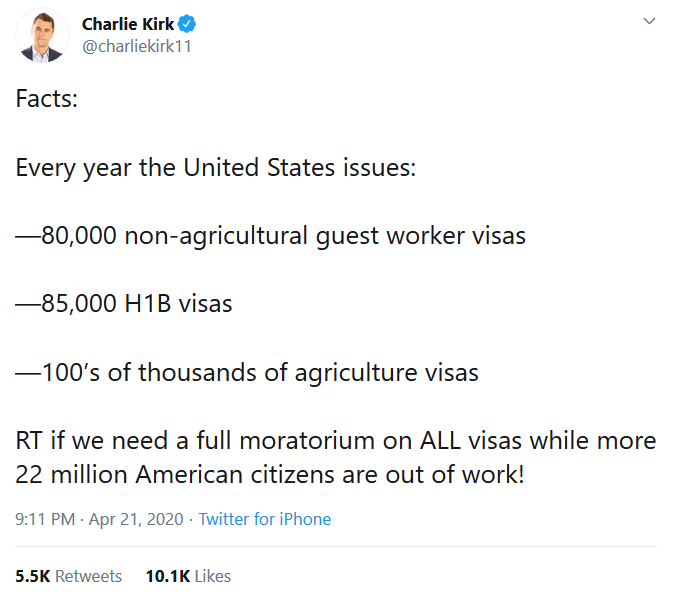 Kirk has typically cheered whatever Trump says or does, and always champions the interests of big business and the “free market.” But for some reason, his priorities have apparently shifted toward a nationalist view.  Maybe the “Groyper War” affected him?

Trump listens to Carlson and sometimes acts on what the Fox host says [Trump gets more foreign-policy ideas from Fox News host Tucker Carlson than his actual advisers, Steve Bannon claims, by Tom Porter, Business Insider, December 12, 2019]. Cruz is a powerful senator who can force the president’s hand with legislation expanding the ban. And TPUSA’s Kirk enjoys close ties to the White House—he might even have suggested the moratorium to begin with.

Good news is, the White House has felt the heat. Thus Senior White House adviser Stephen Miller told prominent Trump supporters during a phone call last week the executive order is just the first part in a wider plan to “turn off the faucet of new immigrant labor.”

“When you suspend the entry of a new immigrant from abroad, you’re also reducing immigration further because the chains of follow-on migration that are disrupted,” Miller said. “So the benefit to American workers compounds with time” [Stephen Miller has long-term vision for Trump’s ‘temporary’ immigration order, according to private call with supporters, by Nick Miroff and Josh Dawsey, Washington Post, April 24, 2020].

Even if this is empty rhetoric aimed at pacifying restless natives, it reveals fear in the White House. If patriot critics are shaking Trump’s cage, he might just do something—particularly if he listens to the cry for help from that disparate group of Americans known as Deplorables.

A USA Today survey before the controversy showed that nearly 80 percent of those polled want a temporary halt to immigration [Exclusive: In four devastating weeks, Americans' fears of the coronavirus have exploded, by Susan Page, USA Today, April 13]. And 57 percent of those answering a more recent Rasmussen survey want a temporary halt [Most Favor Trump’s Halt to Immigration to Help U.S. Workers; Democrats Don’t, RasmussenReports.com, April 24, 2020].

Rasmussen also showed how extreme the average Democrat has become on immigration: 53 percent of those polled disagreed with the idea that American workers should come first. In contrast, 85 percent of Republicans agreed.

That looks like a slam-dunk on the campaign trail.

Of course, Main Stream Media Trump Haters could ask embarrassing questions, such as: Why did his order drop some protections for American workers and reward the fat cats of Wall Street and Big Business.

But that would require Treason Lobby scribes to think like real Americans. They just don’t. They represent the Democratic elite that prefers foreigners to Americans.

And to them, of course, Trump is never right when he pushes a popular idea.

Then again, perhaps a conservative journalist might stop tossing slowballs over the plate and ask Trump about the moratorium. A dry spitter low on the outside corner from One America News might move him to correct his error. Tucker Carlson, Breitbart, Ann Coulter, Michelle Malkin, and others can pressure Trump on TV and social media to do the right thing. But who will do the job in the White House press room? 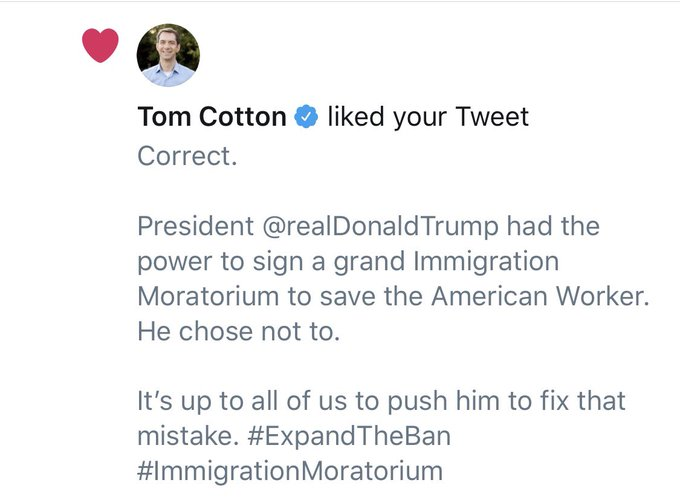 Fortunately, on Capitol Hill a few lawmakers are already stepping up:

Gosar has continued to hammer home this message on Twitter. “We cannot truly put #AmericaFirst unless we suspend H-1B, H4, L1, B1, B2, Optional Practical Training Program, and other guest worker admissions,” he tweeted on Tuesday. 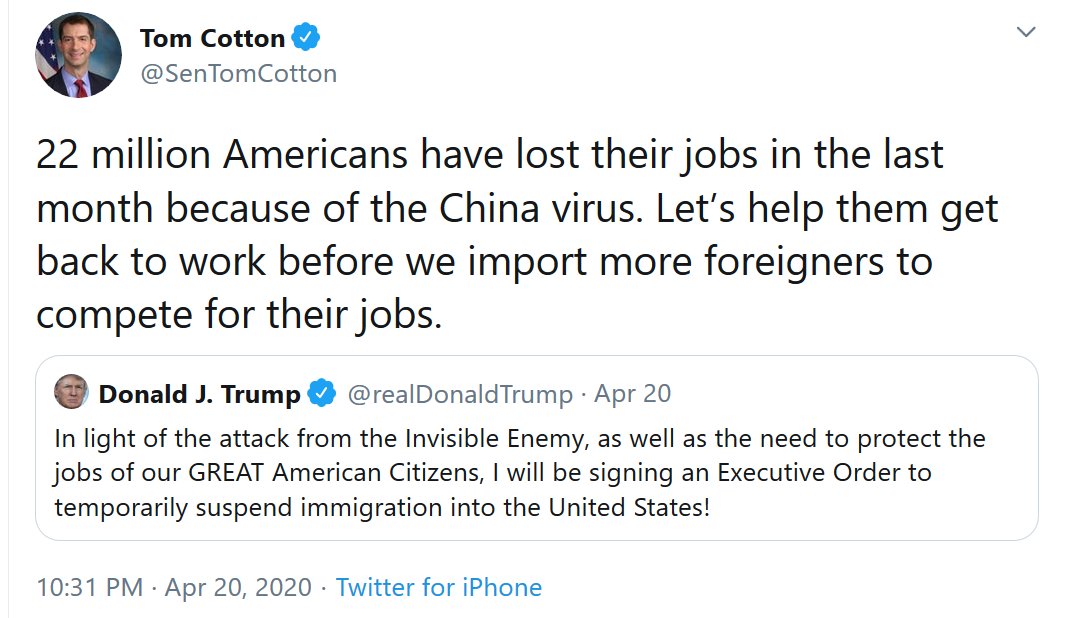 Chances are, one of the two will join the immigration patriot chorus. The Senate is set to return to session next week, a great chance for a bold legislator to call for a correction.

The issue isn’t going away. Millions of Americans will still be jobless when the 60-day pause is over. GOP leaders must be reminded it’s a winning issue that can highlight Democratic extremism.

That message rewrites the MSM-Treason Lobby Chinese Virus narrative: Republicans are doing as much as Americans will tolerate. Democrats will impose anarcho-tyranny.

Flawed as it is, until Trump’s Executive Order, remember that not a single Republican proposed such a sensible idea at the height of the 2008-9 Great Recession. All that has changed.

Trump has put the idea of an immigration moratorium in play. Now it’s up to him to correct his flawed.

After all, playing endless word-games about Coronavirus with a hostile media is not going to re-elect him.