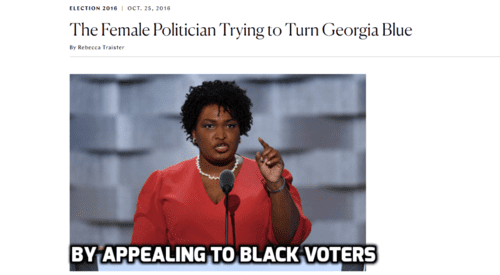 Stacey Abrams' Ascent Based On The Sailer Strategy In Reverse

Stacey Abrams in 2016, on how POC power will electorally steamroll the GOP:

Look at Georgia by contrast today: In terms of active voters, it’s 57 percent white, 30 percent black, 2 percent Latino, and 2 percent Asian, which means you don’t need to spend as much time or money on the persuasion part of the equation. All you have to do is turn out black voters and brown voters. So unlike in North Carolina, where they spent $22.9 million trying to persuade white voters to vote for Obama, all you have to do is spend a quarter of that convincing black voters to vote. It’s a much easier lift to turn out people who agree with you than it is to convince people and then turn them out.

Georgia was going through a demographic shift in the 1990s that made us very solidly red. Previously, we’d been a Democratic state, but you had conservative Democrats, northern liberals who’d moved into Georgia, and African-American Democrats: We were all in same party but not with the same values. That started to fracture in the ’90s. It completely fell apart in 2002, and Democrats hit our nadir in 2010 with the tea party.

What’s different now is that the demographic migration in Georgia is massive and it’s unique; between 2000 and 2010, 1.5 million new people moved into Georgia, 1.2 million of whom were people of color. That is unprecedented in terms of Georgia’s population.

The New Georgia Project’s entire focus is voter registration, voter education, and voter activation of people of color. We successfully registered 64,000 people in 2014 and another 123,000 applications will have been submitted in 2016. When we finish this year, we will have registered around 20 percent of that unregistered population we started with in 2014.

Your untapped population, the population we haven’t spent a great deal of time or effort on, is people of color. And the goal is spending time early, convincing them that their votes matter. If you want progressive policies, these are the folks you go to.

Georgia is the future of America. Economic changes, demographic changes happening around this country — not only with regard to race but in terms of age — all those things find a perfect crucible in Georgia. Georgia is a vision of what America is going to look like in 20 years. Our demographic changes are dramatic. We are now on the cusp of being a majority minority state for first time since Reconstruction.

Abrams is not a stupid woman. She has a sophisticated understanding of the electoral landscape–what it looked like in the past, what it looks like now, and what it is likely to look like in the future. Her inversion of the Sailer Strategy not only has the inherent advantage of winning the long game, her becoming the new face of the Democrat party also immediately backs Republicans into a corner they cannot extricate themselves from without a fundamental shift in their rhetorical paradigm.

Here we have someone who won the Democrat gubernatorial primary and nearly the governorship of one of the more reliably Republican states in the country by explicitly focusing on non-whites. How did she rise to such a position in the first place? By explicitly targeting the POC ascendancy.

More than any other currently active Democrat pol, Abrams is both the cerebral and spiritual embodiment of that ascendancy. In many ways she is the Democrat Donald Trump. To attack Trump is to attack forgotten America. To attack Abrams is to attack the POC champion, to attack the POC champion is to be a white supremacist, and to be a white supremacist terrifies Republicans into rank-breaking, back-stabbing, and surrender more than anything else. That last bit is why Democrats will win for the foreseeable future. They welcome their way to win. The Republicans relentlessly #Resist it.

By taking the party mantle in the state of the union response, Abrams will be casting a circle of protection on Democrats across the country. Republican attacks against Democrats will be more easily recast as attacks on POCs than ever before. There will increasingly be no need to explicitly make the connection, it will simply be understood to be the case.

The only way for the GOP to counter the pro-POC party will be to become the pro-white party, something unthinkable as currently constituted. A politician who not only owns but emphatically promotes focusing on POCs without regard to whites is jettisoned to the top of the Democrat party. In contrast, any Republican politician who is accused of possibly being guilty of maybe thinking about focusing on whites as whites is considered a cursed liability that must be expunged at all costs–even if those accusations are false. This dynamic makes a Democrat defeat virtually impossible.

This is not an unforced error on the part of the Democrat leadership. It’s an aggressive move by a party that senses it has the upperhand and is keen to exploit it. The Bernie Sanders’-style of ‘colorblind’ progressivism doesn’t stand a chance. To reiterate for the hundredth time, Kamala Harris will be the Democrat nominee.

Congratulations to my friend @staceyabrams! There’s no better person to showcase our country's strengths and speak the truth after the State of the Union. pic.twitter.com/TQFz3HGvAp

LinkBookmarkParenthetically, notice our representation in the above photo. See there, outside on the bench!