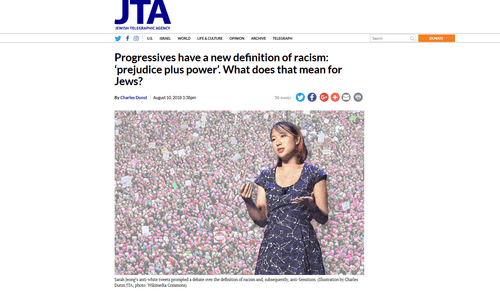 JTA: "Progressives Have a New Definition of Racism: ‘Prejudice Plus Power’. What Does That Mean for Jews?"

From The Jewish Telegraphic Agency:

Progressives have a new definition of racism: ‘prejudice plus power’. What does that mean for Jews?

… Former Bernie Sanders campaign aide Symone Sanders said on CNN last week that Jeong was not being racist because racism is only “prejudice plus power” — implying that only those in positions of power over others can be racist.

Sanders’ point is not new — she is building off the work of others, such as social scientist Patricia Bidol-Padva, who used the “prejudice plus power” definition in the 1970s. As a stand-up comedian might explain it, racism means “punching down,” not punching up.

Prominent activists such as Linda Sarsour and Melissa Harris-Perry have promoted the idea as well, and applied it to defend people they consider relatively powerless against charges of anti-Semitism.

“The thing I’m always worried about in the world is power, and how power is wielded in ways that cause inequity,” Harris-Perry said earlier this year about Nation of Islam founder Louis Farrahkhan, a notorious anti-Semite. “So if you can show me that Minister Farrakhan has taken his position and used his position to create inequity and inequality for Jewish people, then I will denounce that tomorrow.” …

Black-on-white crime, such as the 1970s Zebra random race murders of at least 15 whites by Nation of Islam extremists, don’t count because reasons. Plus, only racists know about the Zebra murders. You aren’t a racist, are you?

Some think this new formulation of racism has problematic implications for Jews, for multiple reasons.

First, it equates Jews with white and presumably institutionally privileged people, ignoring the history and ongoing prevalence of anti-Semitism.

“If Jews are seen as ‘white’ (which, in this permutation of progressivism, they are), and ‘whites’ cannot be subjected to racist attacks, then anti-Semitism becomes a trivial concern,” K.C. Johnson, a history professor at Brooklyn College, former Fulbright instructor at Tel Aviv University and regular Washington Post contributor, told JTA.

Second, it ignores the fact that Jews as a class are often falsely maligned as too powerful — which, paradoxically, would make them fair game for ridicule under the prejudice-plus-power definition.

“Antisemitism is a strange form of prejudice,” Olivia Goldhill wrote in Quartz. “Rather than denigrating Jews as inferior, it casts them as maliciously superior” — and thus worthy of denigration. …

However, especially on the left, some see anti-Semitism as a wholly separate phenomenon from — and perhaps a lesser form of bias than — racism. Racism, in this line of thinking, is fundamentally worse than all other forms of prejudice precisely because it is systemic.

“I want to make the distinction that while anti-Semitism is something that impacts Jewish Americans, it’s different than anti-black racism or Islamophobia because it’s not systemic,” said Sarsour …

Jews, this argument purports, are too embedded within the system — that is, too powerful — to have prejudice effectively wielded against them as racism.

Rabbi Jill Jacobs, the executive director of the left-leaning T’ruah: The Rabbinic Call for Human Rights, largely refutes this idea.

“There is a difference between anti-Semitism and accusations of racism against white people, who are not a coherent historical ethnic group, and who have never been the victims of systemic prejudice,” Jacobs told JTA.