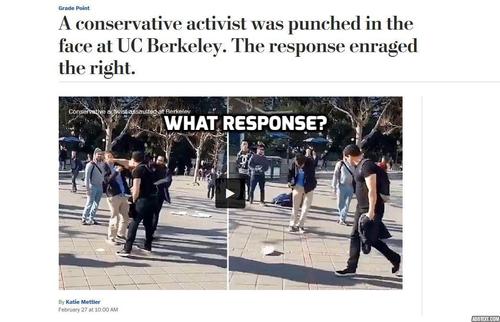 From: A Talk Radio Listener [Email him]
According to Jim Treacher, cops have identified the Berkeley puncher (seen on video genuinely punching someone, rather than smirking) but won't arrest him or even disclose his name.

That was a week ago. You'd think that the attacker would've been arrested by now, or at least identified. Right?

Police are still searching for a man caught on video last week punching conservative activist Hayden Williams in the face on the University of California, Berkeley campus...

Police do not believe the suspect is a student at the university.

That's it. The cops now claim they've identified the attacker, but they haven't arrested him and they're not releasing his name to the public.

Would they be protecting this violent thug's identity if he had been wearing a MAGA hat? 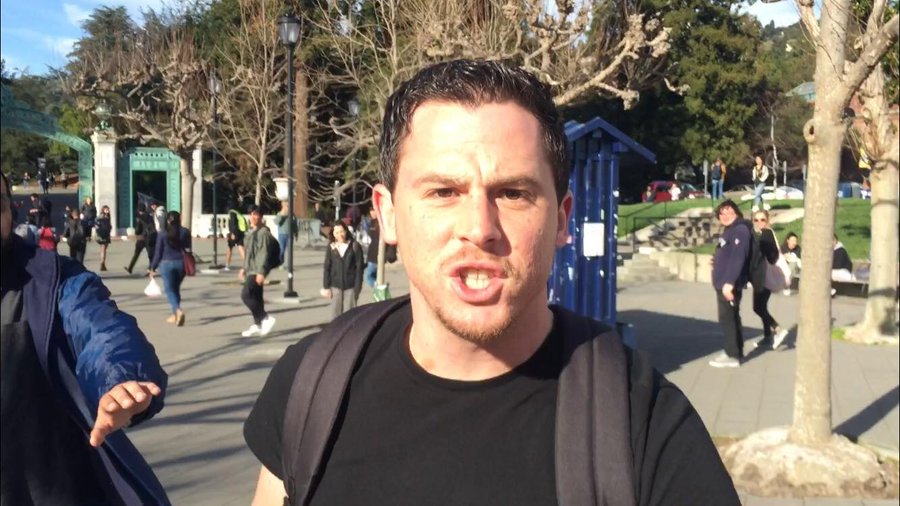 And what triggered the black-clad hooligan? What drove him to such a violent rage? It was a sign reading "Hate Crime Hoaxes Hurt Real Victims," a reference to the Smollett hoax. This coward got so triggered by a fake hate crime that he committed a real one.

And of course, in spite of all the video evidence, the MSM is going with "alleged assault" as their talking point.

The victim needs to bring a civil suit against John Doe and seek discovery from the police department, plus a FOIA request. Where are the anti-communist lawyers paid for by a sympathetic billionaire? Oh right, there aren't any (lawyers or sympathetic billionaires).
James Fulford writes: And the Washington Post, predictably, has gone with a "Conservatives Pounce" storyline. See A conservative activist was punched in the face at UC Berkeley. The response enraged the right, by Katie Mettler, February 27, 2019.