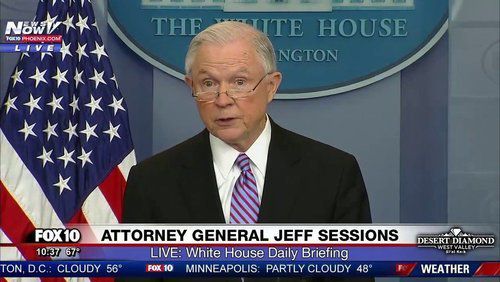 Ann Coulter: Liberals Never Sleep (And Neither Does Jeff Sessions)

The left is very close to having a governing majority due entirely to immigration. Despite the promise of the Trump campaign, there isn't much standing in their way. Now, they're just running out the clock. Soon, we will have admitted so many immigrants that it will be too late to do anything.

Although liberals pretend to have no idea where conservatives got the idea that immigration was designed to change the country and bring in new voters, they weren't always so modest.

In a 1998 article [PDF] for Cornell University's Roper Center for Public Opinion Research, Democratic political consultant Patrick Reddy exulted that the 1965 immigration act was "the Kennedy family's greatest gift to the Democratic Party." Changing the country's demographics through immigration would be "George McGovern's revenge," liberal political strategist Ruy Teixeira announced 16 years ago—and then celebrated as a fait accompli upon Obama's election in 2008.

The very reason the left loathes Trump is that he promised to stop their hostile takeover of our country. But instead of sticking it to his enemies by blocking their depraved agenda, he has fallen into their trap.

Obsessed with the Robert Mueller investigation, the president spends his days tweeting attacks on his attorney general, Jeff Sessions—the one member of Trump's Cabinet making good on his campaign's immigration promises.

It's a win-win for the left. Either they drive Trump from office with an unending harassment campaign disguised as a legitimate investigation, or they keep him too distracted to thwart their plans to flood the country with foreigners.

The Swamp has succeeded beyond its wildest dreams. Trump seems to have completely forgotten about the one policy the left fears most.

Evidently, the media have decided Trump is no longer a threat to their inevitable conquest. The Washington Post cheerfully touts the "growing diversity"—i.e., non-whiteness—of Democrats' nominees. ("Black and Latino Democratic nominees boost their ranks by merging insider organization and outside money," Aug. 29.) 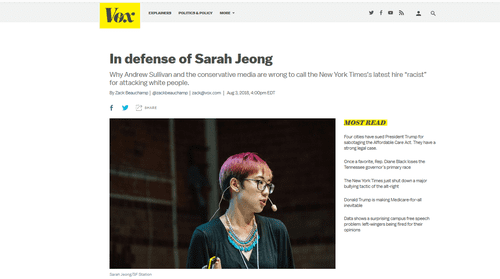 The New York Times is already doing a victory dance on the corpse of historical America. Recently, the newspaper hired a white male-hating bigot, Sarah Jeong, for its editorial board. In the past week alone, the Times has run articles with these headlines: "Who’s Afraid of a White Minority?" and "The Religion of Whiteness Becomes a Suicide Cult."

The gleeful destruction of our country may be less annoying than the insults to our intelligence necessary to pull it off.

About 80 percent of the "children" are teenaged boys, many of them MS-13 gang members. Recently a child rapist tried to enter the country, claiming the rapee was his daughter. Don't separate children from their rapists!

The left doesn't care about child rape or human trafficking. They just want an end to America and its infernal white people.

"Children" captured at the border have to be released from custody after 20 days, pursuant to an ACLU-forged court order. Twenty days was the number the ACLU settled on after determining that it would be impossible to process the illegal border-crossers' asylum claims within that time frame, so the kids and their alleged "parents" would have to be released into the country.

I could process the claims in 10 minutes. Anyone who shows up on our border after "fleeing" El Salvador, Guatemala or Honduras isn't fleeing anything. There are about 20 countries closer to their homes than the United States—and they speak the same language.

Among the countries closer to them than the U.S. is Mexico.

You'd think that, just as a PR matter, Mexico would say, We're currently involved in this PR thing with the U.S., so let's be REALLY nice to any illegals coming into our country. ... He beats you? Oh, that's awful—of course, you can stay here!

But no. Mexico says, Screw off, illegals. We'll help you get to the U.S., but that's the end of our beneficence.

The whole border surge is a hoax, intended to overwhelm the system and get Democrats their last needed non-American voters.

When they're busted on their lies, liberals turn to cliches. "Diversity is a strength!" After four decades of mass immigration from the Third World, I think we're all set on diversity. Any more diversity would be like bringing snow to Eskimos. We're drowning in diversity.

Even if diversity were ever desirable—as opposed to what it is, which is "undesirable"—surely it's not themost important value to a country. At best, diversity is a luxury, adding "vibrancy," as The New York Times is constantly telling us.

It's like having a rule that men need to set aside a certain amount of money each week to wear carnations in their lapels. Carnations are nice, but when you're unemployed and the carnations are wormy, would you make that Priority No. 1? Similarly, "diversity" is a luxury we can't afford in a time of massive income inequality, stagnating wages and a raging heroin epidemic—with 90 percent of the heroin coming from Mexico.

When the cliches fall flat, they just say, So you're with Hitler!

You're Hitler if you support Teddy Kennedy's original claims about his 1965 immigration bill. At the time, he and his co-conspirators swore up and down that it would not alter the country's ethnic composition one iota. Now, it's "white supremacist" to say: "We liked our country the way it was."

Has anyone ever criticized a black, brown, beige, yellow, red or green nation for wanting to preserve its ethnicity? No, only a white majority is pure evil that must be extirpated.

When facing your new overlords, remember: When there was 10 seconds left on the clock, we decided to get rid of Jeff Sessions for keeping Trump's promises on immigration, rather than using his office to protect the president from a Russian investigation so stupid that no one outside of the Swamp cares about it.