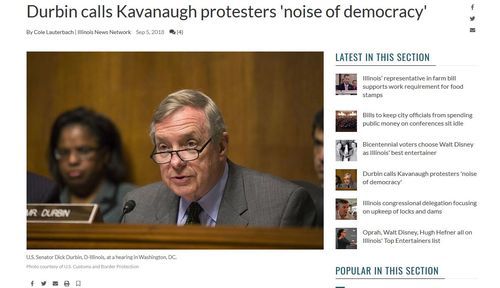 The campaign to overturn the 2016 election and bring down President Trump shifted into high gear this week.

Inspiration came Saturday morning from the altar of the National Cathedral where our establishment came to pay homage to John McCain.

Gathered there were all the presidents from 1993 to 2017, Bill Clinton, George W. Bush and Barack Obama, Vice Presidents Al Gore and Dick Cheney, Secretaries of State Hillary Clinton, John Kerry and Henry Kissinger, the leaders of both houses of Congress, and too many generals and admirals to list.

Striding into the pulpit, Obama delivered a searing indictment of the man undoing his legacy:

"So much of our politics, our public life, our public discourse can seem small and mean and petty, trafficking in bombast and insult and phony controversies and manufactured outrage. ... It's a politics that pretends to be brave and tough but in fact is born of fear."

Speakers praised McCain's willingness to cross party lines, but Democrats took away a new determination: From here on out, confrontation!

Tuesday morning, as Senate Judiciary Committee hearings on Judge Brett Kavanaugh's nomination to the Supreme Court began, Democrats disrupted the proceedings and demanded immediate adjournment, as scores of protesters shouted and screamed to halt the hearings.

Taking credit for orchestrating the disruption, Sen. Dick Durbin boasted, "What we've heard is the noise of democracy."

But if mob action to shut down a Senate hearing is the noise of democracy, this may explain why many countries are taking a new look at the authoritarian rulers who can at least deliver a semblance of order.

Wednesday came leaks in The Washington Post from Bob Woodward's new book, attributing to Chief of Staff John Kelly and Gen. James Mattis crude remarks on the president's intelligence, character and maturity, and describing the Trump White House as a "crazytown" led by a fifth- or sixth-grader.

Kelly and Mattis both denied making the comments.

Thursday came an op-ed in The New York Times by an anonymous "senior official" claiming to be a member of the "resistance ... working diligently from within to frustrate parts of his (Trump's) agenda."

A pedestrian piece of prose containing nothing about Trump one cannot read or hear daily in the media, the op-ed caused a sensation, but only because Times editors decided to give the disloyal and seditious Trump aide who wrote it immunity and cover to betray his or her president.

The transaction served the political objectives of both parties.

While the Woodward book may debut at the top of The New York Times best-seller list, and "Anonymous," once ferreted out and fired, will have his or her 15 minutes of fame, what this portends is not good.

For what is afoot here is something America specializes in—regime change. Only the regime our establishment and media mean to change is the government of the United States. What is afoot is the overthrow of America's democratically elected head of state.

The methodology is familiar. After a years-long assault on the White House and president by a special prosecutor's office, the House takes up impeachment, while a collaborationist press plays its traditional supporting role.

Presidents are wounded, disabled or overthrown, and Pulitzers all around.

No one suggests Richard Nixon was without sin in trying to cover up the Watergate break-in. But no one should delude himself into believing that the overthrow of that president, not two years after he won the greatest landslide in U.S. history, was not an act of vengeance by a hate-filled city that ran a sword through Nixon for offenses it had covered up or brushed under the rug in the Roosevelt, Kennedy and Johnson years.

So, where are we headed?

If November's elections produce, as many predict, a Democratic House, there will be more investigations of President Trump than any man charged with running the U.S. government may be able to manage.

There will be investigations by House committees into alleged violations of the Emoluments Clause. And ever present will be platoons of journalists ready to report the leaks from all of these investigations.

Then, if media coverage can drive Trump's polls low enough, will come the impeachment investigation and the regurgitation of all that went before.

If Trump has the stamina to hold on, and the Senate remains Republican, he may survive, even as Democrats divide between a rising militant socialist left and the Democrats' septuagenarian caucus led by Hillary Clinton, Joe Biden, John Kerry, Bernie Sanders and Nancy Pelosi.

2019 looks to be the year of bellum omnium contra omnes, the war of all against all. Entertaining, for sure, but how many more of these coups d'etat can the Republic sustain before a new generation says enough of all this?