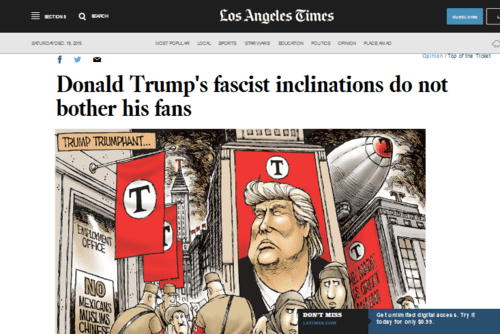 This year—I just have time to notice!—marks the 25th birthday of Godwin's Law.

In case you don't know Godwin's Law, here's the background. The internet was the plaything of academics and government types until 1989, when the first dial-up access was made available to general users. Just one year later, in 1990, Mike Godwin formulated Godwin's Law, a universal principle describing the behavior of online discussion groups.

Godwin's Law, in its original form, says the following thing:

As an online discussion grows longer, the probability of a comparison involving Nazis or Hitler approaches one.

A probability of one is, of course, certainty.

Well, the latest manifestation of Godwin's Law showed up this week in—would you believe it?—The New York Times. This was an Op-Ed column by Roger Cohen[Email him] in the December 14th edition of the Gray Lady. Title of the column: Trump's Weimar America.

"Weimar" here is short for the Weimar Republic, the constitutional order under which Germany was governed between 1919 and 1933, before the Nazi Party came to power.

Just to remind you: This is The New York Times, America's premier broadsheet newspaper.

Here's a sample of Cohen's argument.

The Weimar Republic ended with a clown's ascent to power, a high-energy buffoon who shouted loudest, a bully from the beer halls, a racist and a bigot. He was an outsider given to theatrics and pageantry. He seduced the nation of Beethoven. He took the world down with him.

This is such low-grade stuff, it's wearisome to have to deal with it. Somebody has to, though, so here goes.

First off, as I said, writing about this same tedious topic five years ago, Hitler's Germany does not map into any large tendency in modern American politics. Some particular components of it map into localized phenomena; but even when this happens, it is usually to some similar feature of our political Left. Take the universities, for example. In Weimar Germany they were bastions of Nazism. I'm going to quote myself again, this time from my book Prime Obsession, page 255. The subject here is the university town of Göttingen, a great center of mathematical excellence in the 19th and early 20th centuries of which I wrote that

Göttingen at large was rather strong for Hitler. This was true of both "town" and "gown." In the 1930 elections, Göttingen had delivered twice as many votes to Hitler's party as the national average; and the Nazis had a majority in the university's student congress as far back as 1926.

So if it's parallels with the Weimar Republic that Roger Cohen seeks, perhaps he should visit our university campuses.

For that matter, the quasi-pagan nature worship characteristic of Nazi culture has resurfaced in far-Left environmental and animal-rights groups. Hitler would have been a great enthusiast for climate-change alarmism.

Antisemitism is more complicated. The biggest coherent groups of anti-Semites in the U.S.A. today are blacks and Muslims, two groups that are situated pretty solidly on the political Left.

There's antisemitism on the nationalist Right, too, though, of course. You don't need to tell me, I know all about it. As an anti-anti-Semite myself, with a long paper trail in evidence of that, I get emails sneering at me for cowardice because I stubbornly refuse to "name the Jew."

Yes, there are anti-Semites in the Dissident Right, plenty of them. But there are plenty of us anti-anti-Semites too, though; not to mention a fair number of Jews. The last Dissident-Right function I attended was the annual conference of the H.L. Mencken Club in November. The speaker roster at that event included Bob Weissberg, Ed Rubenstein, Carl Horowitz, and the club's founder Paul Gottfried.

But, hey, don't take my word for it: The Mencken Club publishes online audio of conference speeches. American Renaissance publishes online video of their conferences. Check 'em out for yourself; and if you spot an anti-Semitic rant, let me know.

And, by the way, none of the following is anti-Semitic in any way I understand the word.

What does any of that have to do with Donald Trump, anyway? The blogger who calls himself "Lion of the Blogosphere" had an interesting post about this the other day. Quote:

If Trump becomes president he will be the most culturally Jewish president in American history. His daughter is Jewish, and probably a plurality of his top employees are Jewish. His CFO Allen Weisselberg and his top lawyers Alan Garten and Jason Greenblatt (Yeshiva University graduate) are likely Jewish based on their last names. As well as his attorney and Executive Vice President Michael Cohen who often represents Trump on TV interviews and his previous general counsel Bernie Diamond. And Cathy Hoffman Glosser, his EVP of Global Licensing. And Eric Danziger, the CEO of the Trump Hotel Collection. And the old guy who worked for him on his TV Show, George Ross. And of course his own daughter who is his EVP of Development and Acquisitions.

There are a great many things you can say about all this.

But if the thing you want to say is that Donald Trump maps onto Adolf Hitler, and Trump's supporters map onto the Nazi Party of Weimar Germany, then I'm afraid I'm going to have to say: