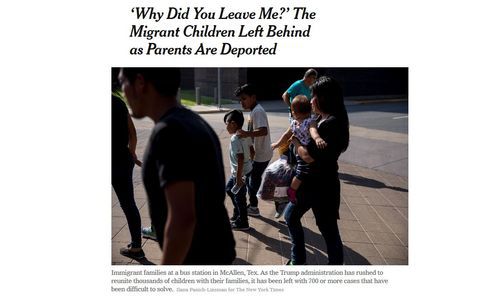 Ann Coulter: The ACLU Won't Rest Until Every Illegal Gets In

After all the wailing about the children streaming across our wide-open, wall-less border, there was very little media interest in the Senate Judiciary Committee hearing on Tuesday on this very subject. Knowing facts could interfere with their showboating displays of compassion.

Among the facts journalists might have learned is that, although the Constitution technically gives Congress the power to write laws, it turns out our immigration laws are written by the ACLU.

The children clamoring across our border can't be held for more than 20 days. This isn't because Congress, after hearings, debate and negotiation, passed a law. The 20-day rule was the ACLU's innovation.

The Alien Civil Liberties Union brought endless lawsuits, resulting in a 1997 "settlement agreement" [Flores v. Meese. PDF] between two parties who appeared to be opposed, but were actually on the same side: the pro-open borders Janet Reno Justice Department versus the pro-open borders ACLU. No, no—not the briar patch, ACLU! Anything but that!

The 20-day limit is unfortunate because, from capture to final order, an immigration proceeding takes 30 to 40 days. Illegals who are detained at the border cost the taxpayers $1,600 to remove. By contrast, releasing illegals, even under the much-celebrated "alternatives to detention" (ankle monitors and "community supervision"), costs U.S. taxpayers $75,000 per removal—and most of them don't ever get removed. By some estimates, 90 percent don’t even show up for their hearings.

The biggest spike in illegal border crossings came after Dolly Gee, an Obama-appointed federal district court judge in California, announced in 2015 that not only "children," but also any adults traveling with them, had to be released into our country after 20 days.

I wonder if Judge Gee's order created any sort of incentive. Drag some unfortunate child across thousands of miles of desert and ... YOU WIN! You're in and will most likely never be caught and deported. Arrive alone and you will be detained and probably removed after 30 days.

How insane was that ruling? It was too much even for the Ninth Circuit, which ruled that the free pass applies only to "the children." (Child defined as "anyone who claims to be under 18 years old.") Drug dealers, coyotes and scam artists would have to wait for Rachel Maddow to cry about SEPARATING FAMILIES! for their free passes.

If the kids can't be held for longer than 20 days and the parents can't be separated from their (alleged) children, then the only option is to release both adults and children into the U.S. As Matthew Albence, an Immigration and Customs Enforcement (ICE) official, said, Judge Gee effectively imposed "catch and release" on the entire country.

The parents are so broken up about being separated from "their" children that hundreds of them have gone home without them. Reams of articles hysterically claimed that the evil Trump administration tricked these super-involved parents into signing forms they couldn't understand!

Nowhere will you read that the form the parents signed was written by the ACLU.

Liberals don't care about kids. They want to wreck our country.

At $75,000 per removal and assuming 80 percent are ordered removed, it will cost taxpayers approximately $42 billion to remove the 700,000 illegals the ACLU made us release, forget the ones we never caught in the first place. That's just procedural costs—not the costs in welfare, schooling, vaccinations, dental care, drunk driving accidents, MS-13 violence and the ongoing heroin epidemic.

How much would that wall cost, again?