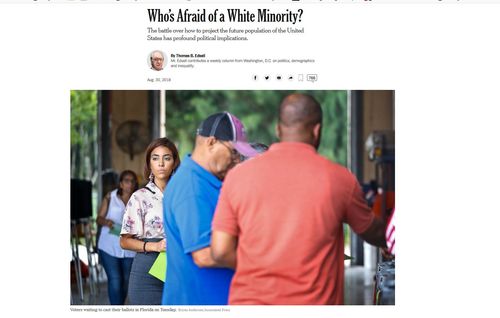 Who’s Afraid of a White Minority?

The battle over how to project the future population of the United States has profound political implications.

By Thomas B. Edsall
Mr. Edsall contributes a weekly column from Washington, D.C. on politics, demographics and inequality.

The question of whether America will become a majority-minority nation — and when that might happen — is intensely disputed, of enormous political import and extraordinarily complex.

This is exactly the same argument as I’ve responded to before.

Two articles that appeared in the opinion section of The Times over the past few years made the case that misleading statistical artifacts used by the Census Bureau have increased the fear of a majority-minority America, a fear that played a crucial role in the 2016 election.

Both Richard Alba, of CUNY, in “The Myth of the White Minority,” and Herbert Gans, of Columbia, in “The Census and Right Wing Hysteria,” argued that questionable census classifications led to an undercount of America’s white majority. This anxiety over the decline of white hegemony, in turn, helped propel a segment of conservative voters to cast ballots for Donald Trump.

The argument is that white people shouldn’t be alarmed by all the articles in, say, the New York Times about how white people are finally going to get what’s coming to them once they are no longer a majority of the voters because, you see, people of mixed descent will voluntarily give up identifying as non-white in order to cash in on that sweet, sweet White Privilege.

I did a search for terms including “affirmative action,” “racial preferences,” and “quotas,” but they never seemed to come up.

Also in the New York Times yesterday, a little taste of the kindness and consideration a white minority can expect:

The Religion of Whiteness Becomes a Suicide Cult
A wounded and swaggering identity geopolitics puts the world in grave danger.

By Pankaj Mishra
Mr. Mishra is a contributing opinion writer focused on ideas and politics.

… Other panicky white bros not only virulently denounce identity politics and political correctness — code for historically scorned peoples’ daring to propose norms about how they are treated; they also proclaim ever more rowdily that the (white) West was, and is, best. …

The low comedy of charlatanry, however, should not distract us from the lethal dangers of a wounded and swaggering identity geopolitics. …