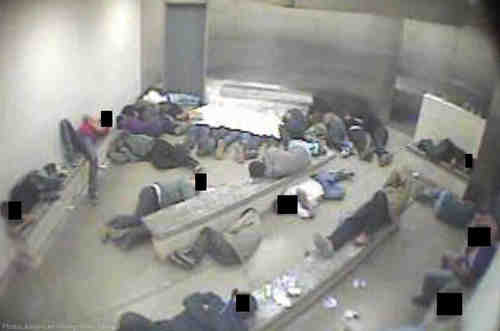 The Liars At The ACLU Are Libelling The Border Patrol—The Border Surge Kids Weren't "Abused", They Were Just Overcrowded

The American Communist Lovers Union (ACLU) is rehashing a series of long debunked complaints against the U.S. Border Patrol (USBP) involving false and unfounded allegations of abuse of illegal alien minors smuggled into the United States by drug gangs and other alien smuggling criminal groups.  That the ACLU is lending legal cover in support of the scheme to enrich the smuggling organizations is no surprise, they always did the same for drug dealers.  But the real motivation of the ACLU is to destroy the historic American nation by demographic displacement and repeating lies from the past are just one of the ACLU’s tactics.  Remember, the ACLU was founded by a Communist Roger Baldwin.

Some years ago during the height of the smuggling of minors into the United States, the ACLU breathlessly claimed that the illegal alien minors were being physically and sexually abused by Border Patrol Agents.  The allegations were scandalous, and as unfounded as they were salacious, designed to smear BPAs and immigration enforcement at the border in general and thereby discourage arrests and deportations.  [The Border Patrol Was Monstrous Under Obama. Imagine How Bad It Is Under Trump, By Mitra Ebadolahi, ACLU, May 23, 2018 ] The lies of the ACLU were cover for a support for demographic displacement of native Americans by invaders from Central America.

The lies were quickly debunked by the Department of Homeland Security Office of Inspector General (DHS OIG).  However, the ACLU decided to repackage the allegations from 2009 to 2014 for another try at the Big Lie.

Documents obtained by the American Civil Liberties Union featured in a new report released today show the pervasive abuse and neglect of unaccompanied immigrant children detained by U.S. Customs and Border Protection. The report was produced in conjunction with the International Human Rights Clinic at the University of Chicago Law School.

“These documents provide a glimpse into a federal immigration enforcement system marked by brutality and lawlessness,” said Mitra Ebadolahi, ACLU Border Litigation Project staff attorney. “All human beings deserve to be treated with dignity and respect regardless of their immigration status — and children, in particular, deserve special protection. The misconduct demonstrated in these records is breathtaking, as is the government’s complete failure to hold officials who abuse their power accountable. The abuse that takes place by government officials is reprehensible and un-American.”

All lies of course, as the problem with the massive numbers of illegal alien minors was that the Border Patrol was unprepared for this orchestrated surge of illegal aliens coming to benefit from the Obama Regime Administrative Amnesty.  Sure, there were not nice places to hold the illegal alien minors and their parents who brought them.  Most were released within days, but still had to stay in custody for a few days to be processed for hearings to which most never showed up.

U.S. Customs and Border Protection (CBP), the parent agency for USBP, quickly denounced the new lies from the ACLU, pointing out that the DHS OIG refuted the crazed claims of the illegal alien lobby.

Customs and Border Protection strongly denied the claims, as it has rejected similar accusations of widespread excessive use of force in recent years. The documents compiled by the Homeland Security Department’s Office of Civil Litigation and Civil Rights for the ACLU are partially redacted, making it more difficult to assess the allegations and findings.

Homeland Security’s internal watchdog agency has reviewed the claims and found them unsubstantiated, Customs and Border Protection spokesman Dan Hetlage said. In 2014, the department’s inspector general investigated 16 cases of alleged child neglect and abuse — out of 116 that advocacy groups had compiled — and reported that federal prosecutors declined to file charges because there was no evidence of crimes.

[ACLU: Misconduct Claims By Children Are Widespread At Border, by Elliot Spagat, AP, May 23, 2018]

Your correspondent reported on the DHS OIG finding that the ACLU were lying and importantly identified the lies as part of a scheme by the ACLU and others to make false allegations about immigration enforcement in order to interfere with that enforcement.

The Obama Regime, in conjunction with the Treason Bar and the American Civil Liberties Union (ACLU), has been waging a war on immigration law enforcement in general and against Border Patrol Agents specifically, that this writer had documented at VDare.com here and here. However, despite the concocted complaints alleging abuse of the tens of thousands of juvenile illegal aliens, the Department of Homeland Security Office of Inspector General has found that the allegations are unfounded.

Furthermore, the allegations by the ACLU and other invader groups against the USBP and CBP for use-of-force incidents, e.g. shootings were investigate and determined to be false.

For immigration patriots, there is some good news as, yet again, false allegations against Border Patrol Agents involved in shootings have been exposed and the innocent Agents exonerated.

Border officials for the first time have publicly released the conclusions of internal investigations of agents who opened fire while on duty, ruling that officers had acted properly in four shootings.
The reviews were conducted by an internal panel that the U.S. Customs and Border Protection service set up to address a troubling pattern of agents’ use of deadly force, according to a summary of the reviews published online Thursday.
Fourteen other shootings are still being investigated.
[Border Officials Clear Agents In Four Deadly-Force Cases, Brian Bennett, LAT, June 30, 2016]

It must have been particularly galling for the LAT to admit that the shooting it hyped just a year ago, were justified shootings, as anyone with any knowledge of police shootings would know. The LAT wanted its own Michael Brown case from the Border Patrol, but, as in the Brown shooting, the LAT was barking up the wrong tree, and trying to sell papers by inciting a race war. And, undoubtedly those other 14 shooting investigations will have the same result.

[News, Good And Bad, In The Obama Regime War On The Border Patrol, by Federale, Federale Blog (Via Wayback Machine), July 30, 2016]

But, the ACLU, like SJWs, always double down on lies.  They rehashed their 2014 claims of abuse and repeated the lies as if the false reports were new news and then lied when exposed by CBP’s response.

CBP responded by calling our report “unfounded.” Here, we address the false statements CBP made in its response.

“CBP . . . is greatly disappointed that [the report] doesn’t acknowledge that the [Office of Inspector General] conducted an investigation in 2014 that determined that prior claims made by the ACLU were completely unfounded. The OIG conducted 57 unannounced visits to 41 different CBP facilities and “did not observe misconduct or inappropriate conduct by DHS employees during our unannounced visits.” The full report is available here.”

[CBP Fails to Discredit Our Report on Abuse of Immigrant Kids, By Mitra Ebadolahi, ACLU, May 31, 2018]

But the ACLU response claiming that the DHS OIG only did a few site inspections  is a lie.  And it wasn’t just about kids, as most of the illegal alien minors were accompanied by parents who knew bringing minors with them was their ticket to be released.  The DHS OIG completed a full investigation and that investigation, including extensive interviews of alleged victims, produced no facts, only claims that witnessed heard about violations, but not actual victims could be found, or the allegations were incidental, such as detention rooms being too hot or cold, emergency accommodations were uncomfortable, or those detained were not released soon enough.

Left unsaid was that a year or so later, the ACLU concocted similar claims of abuse against adults arrested, but failed to provide to DHS OIG the actual names of the alleged victims, none of whom could be tracked down to be interviewed about the unsubstantiated accusations of beatings, rape, and theft.

The ACLU also claimed that a lawsuit it filed was proof of the allegations:

Perhaps most importantly, in June 2015 — almost a year after the visits touted in CBP’s response — a coalition of immigrants’ rights advocates filed a class action lawsuit challenging CBP detention conditions. The litigation, which continues today, documents former CBP detainees’ horrific experiences, including through photos showing just how bleak these facilities are.

All they have is a law suit about “bleak” facilities as proof of sexual and physical abuse? The ACLU has take the “big lie” to greater heights.  But merely filing a lawsuit does not make an allegation true.