The Fox News story above is about a Mexican illegal who had been deported five times already:

An illegal immigrant on a Greyhound bus who allegedly threatened to shoot and kill passengers on Friday — leading police on a chase from Wisconsin to Illinois — was deported five times, a U.S. Customs and Border Protection spokesperson told Fox News.

The spokesperson said on Sunday that Margarito Vargas-Rosas, 33, who faces terror charges, was in the U.S. illegally and was "removed" from the U.S. the last five times Border Patrol agents encountered him. He also had a previous DUI arrest to his name.

The story says this:

Vargas-Rosas is in the U.S. illegally, and was previously deported to Mexico in 2012, The Daily Herald reported. 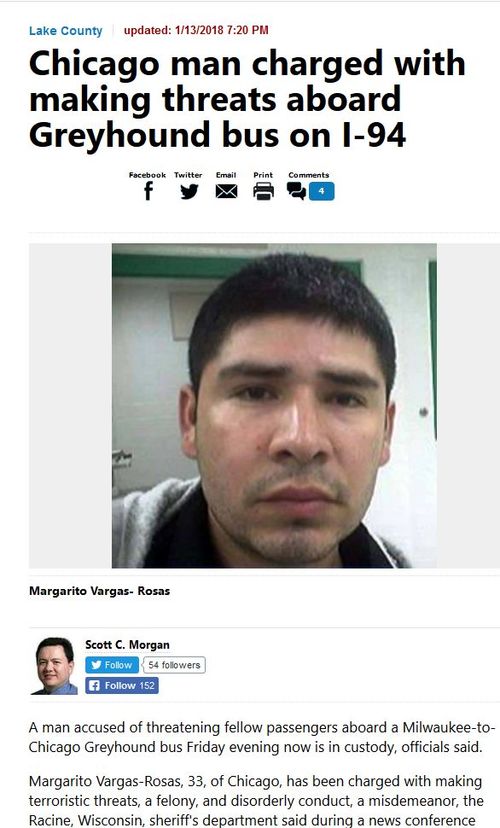 That's very helpful and informative of the  Daily Herald, but just look at the headline they put on the story:

A man accused of threatening fellow passengers aboard a Milwaukee-to-Chicago Greyhound bus Friday evening now is in custody, officials said.

Margarito Vargas-Rosas, 33, of Chicago, has been charged with making terroristic threats, a felony, and disorderly conduct, a misdemeanor, the Racine, Wisconsin, sheriff's department said during a news conference Saturday.

According to U.S. Customs and Border Protection, Vargas-Rosas does not have legitimate status in the United States and had been previously deported to Mexico in 2012 for traffic offenses.[More]

Most of the coverage from the no-Fox media is classic  "Man Arrested", but only the  Daily Herald went so far as to call him a "Chicago Man".