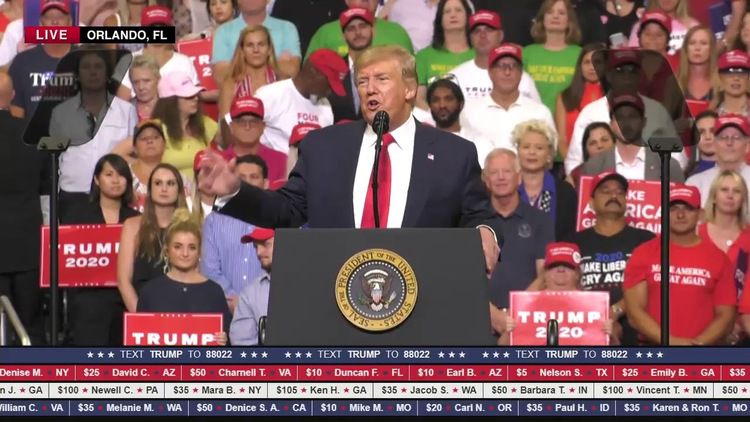 President Trump's first speech of the 2020 campaign recalled his 2016 glory days, and that's good news for immigration patriots. He emphasized immigration as a danger to the U.S.. He slammed Democrats' extremism on the issue. He didn't make any missteps like trying to pitch the audience on Amnesty or increasing legal immigration. Unfortunately, his fire was still targeted against just illegal immigration, when it's legal immigration that poses the ultimate danger. And he exaggerated his accomplishments. But it showed immigration will be a core theme of his re-election effort. Like it or not, patriots definitely have a dog in this fight.

Trump’s main point: Democrat immigration extremism. In Trump’s telling, the Democrats want Open Borders and no immigration enforcement at all. The president directly referred to the Democrats’ demographic bet: The more immigrants America has, the more Leftist it becomes. Additionally, Trump accurately noted Democrats want to take away conservatives’ free speech and “use the power of the law to punish their opponents.”

“They would strip Americans of their constitutional rights while flooding the country with illegal immigrants in the hopes it will expand their political base, and they'll get votes someplace down the future,” he said in his strongest line of the night. “That's what it's about.”

California Sen. Kamala Harris unthinkingly confirmed Trump’s demographic argument the same day. “Let's call this what it is: an attempt to remake the demographics of our country by cracking down on immigrants,” Harris tweeted in response to Trump’s plan to deport more illegal aliens.

Illegal immigrants as future voters—Democrats are not supposed to say that part out loud.

The Democrat agenda of Open Borders is morally reprehensible. It's the greatest betrayal of the American middle class and, frankly, American life. Our country, has a hole, nobody sees anything like it, people are pouring in.

And in his second-most powerful moment of the night, Trump lambasted the radical Leftism that has made Democrats put America last:

They've been afflicted with an ideological sickness that protects foreign borders, but refuses to protect our borders; that promotes jobs overseas, but allows our factories to close; that promotes democracy abroad, but shreds our Constitution at home. That declares support for free speech and free thought, but relentlessly suppresses them both and that constantly savages the heroes of American law enforcement. We don't want that, we don't want that.

“Illegal mass migration brings in millions of low wage workers to compete for jobs, wages and opportunities against the most vulnerable Americans cutting off their path to the American dream. Thanks to Democrat policies, schoolchildren across the country are being threatened by the vicious gang MS-13,” he argued. “Mass illegal migration reduces living standards and strains public resources. If Democrat officials had to send their children to those overcrowded overburdened schools, they would not tolerate it for one minute.”

This is an interesting way to frame the issue. But of course it’s not just illegal immigration causing these problems. American communities have been transformed for the worse by legal immigrants. Minneapolis is one example: Somali refugees have brought crime, gang violence, and Islamic terror to the Minnesota city. [How Minneapolis' Somali community became the terrorist recruitment capital of the US, by Hollie McKay, Fox News, February 16, 2019] They’re not illegal immigrants--they came here legally. But they still shouldn’t be here.

Back in the 2016 campaign, Trump did call out the problems with refugees and other legal immigrants. [Somali migrants are 'disaster' for Minnesota, says Donald Trump, by Ben Jacobs and Alan Yuhas, The Guardian, November 7, 2016]  He should do the same in 2020.

Trump outlined his proposals for illegal immigration in one sentence:

All of those are undeniably good ideas—except for the last part.

Trump appears to have dropped his calls for more immigration, he still insists on an immigration system “based on merit.” That’s not as bad, but it does not reduce immigration. Trump in effect notes the problems caused by legal immigration, yet attributes them solely to illegal immigrants. This merit-based line shows he’s sticking by the imperfect immigration plan unveiled in May.

Another problematic aspect of Trump’s speech: his many claims that the wall was being built. He even claimed the “new” barriers were stopping the caravans. That’s simply not true. The border has seen record-levels of illegal entry in recent months and no new border barriers have been completed since Trump took office [Here's a breakdown of where Trump's border wall stands, by Quinn Owen, ABC News, June 11, 2019]

It’s understandable why Trump would not say “I haven’t built the wall” on the campaign trail. His executive orders in February did secure a substantial amount in funding to begin new wall construction. Trump is indeed trying to build the wall. But he shouldn’t falsely claim his repaired barriers are stopping the caravan.

His concluding message on immigration was solid and is a fine campaign pitch:

Of course, Trump does need more Republicans in Congress to get anything done. Right now, there is not a whole lot Trump can do legislatively to make patriotic immigration proposals law. However, he can highlight good proposals on the campaign trail to show Americans what a second-term Trump will do. For example, there’s Texas Rep. Chip Roy’s bill that would give the president an additional $4.5 billion for border security. [Rep. Chip Roy steps up demands for border security funding sought by Trump, by Matthew Adams, Dallas Morning News, June 18, 2019]

Trump also should remember his past call to eliminate birthright citizenship and revive that for the campaign trail. If he wants to have more guest worker visas, he should at least mitigate its negative political effects and ensure these foreigners do not birth American citizens.

And, of course, Trump also should do more with his executive powers. He cannot blame Democrats entirely for the lack of action on immigration. He and his party also share the blame. He must show real progress on the wall and find ways to aggressively enforce immigration law. A gridlocked Congress does not excuse inaction.

Overall, Trump’s first official campaign speech was quite promising. It made solid points about the costs of immigration, emphasized the Open Border extremism of his opponents, and offered some ideas on how to fight back against illegal immigration. If this is how he will campaign on immigration, it’s a fine start.

But Trump needs to make significant improvements to make this a truly America First platform—and ensure his re-election.

Washington Watcher II [Email him] is another anonymous source Inside The Beltway.