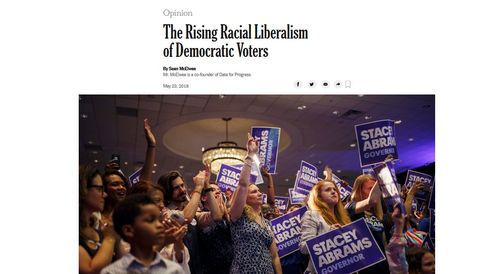 NYT: The Growing Extremism of White Democrats on Race & Immigration

By Sean McElwee
Mr. McElwee is a co-founder of Data for Progress.

In response to both the election of Barack Obama in 2008 and the backlash in favor of Donald Trump in 2016, analysts and commentators have focused mostly on racial attitudes on the right. …

But few have investigated the countervailing trend on the left, the increasing racial liberalism of Democratic voters, which I’ve been thinking about for a while.

But of course Trump voters control the commanding heights of American discourse, such as, uh, Breitbart and certain sub-Reddits, along with a thinktank in the Inland Empire. So it’s only natural that all attention has been focused upon Trump voters as the Prime Movers.

Though Mr. Obama’s presidency ended up being defined in many ways by America’s reaction to his race, he carefully avoided racially liberal appeals during his original campaign, even taking the time to criticize the purported excesses of campus liberalism. Mr. Obama had begun his national political career with a speech at the Democratic convention in 2004, declaring that “there’s not a black America and white America and Latino America and Asian America; there’s the United States of America.” During his 2008 campaign, to give just one example, he turned down an invitation to Tavis Smiley’s State of the Black Union, an event Hillary Clinton attended.

E.g., Hillary’s initial response to the BLM terrorist massacre of Dallas cops was to lecture whites on “implicit bias.”

She warned of “deplorables…”

My impression at the time was that current ideological extremism of Democrats on identity politics emerged during Obama’s get-out-the-vote drive in 2012. Since then, Democrats have carried on by turning on each other — targeting Silicon Valley, Hollywood, universities, etc. — since there is not all that much left to loot from Red State America.

This shift in political rhetoric has coincided with an underappreciated trend: the rapid increase in the racial liberalism of Democrats, including white Democrats, which I analyzed in a recent report by my think thank, Data for Progress. The General Social Survey asks a question about the causes of racial inequality and allows respondents to select whether they think various factors contribute to inequality. Two possible answers are “discrimination” and “willpower,” which are the two variables I explore here (respondents could select both if they chose). The first roughly measures whether respondents take a structural view of racial inequality and the second whether they take a more individualistic view of racial inequality.

Sure looks like it wasn’t Democrats belatedly responding to Trump’s election, it was more like Democrats following their leadership into their post-Ferguson extremism.

We’re witnessing a historically unprecedented shift left in opinions about race among Democratic voters. But is this the result of a change of heart or a sorting process in which racial conservatives leave the Democratic Party and racial liberals leave the Republican Party?

To study this, I used the Voter Study Group, a panel survey that re-interviewed individuals in 2016 who had previously been interviewed in 2011. By examining only individuals who identify as Democrats in both the baseline survey and the 2016 survey, I can weed out the possibility that the shift I’m measuring is due only to attrition. And indeed, on every question in the racial resentment battery, white Democrats were more likely to take the liberal position in 2016 than they were in 2011, often startlingly so. …