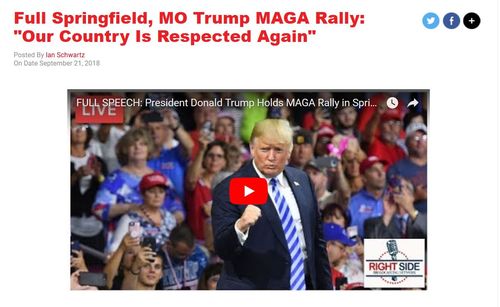 Here's an excerpt from the Donald Trump speech in Springfield, MO, via RealClearPolitics.

But to me, it's the Democrat Party, and they aren't just extreme. They are, frankly, dangerous, and they are crazy. They're crazy.

Democrats want to abolish us. In other words, they want to abolish immigration enforcement entirely, let violent sadistic gangs, like MS-13—the worst gang in the world—run wild in our communities.

So never made a lot of sense to me, somebody who wants to open borders—crime, and somebody wants higher taxes. Think of it. So you got open borders, you have crime. Here's their platform, crime and high taxes. I don't like that. I don't think I could win. That's not a good platform. (Emphases added.)

You can watch Trump's entire speech below, or read it here.