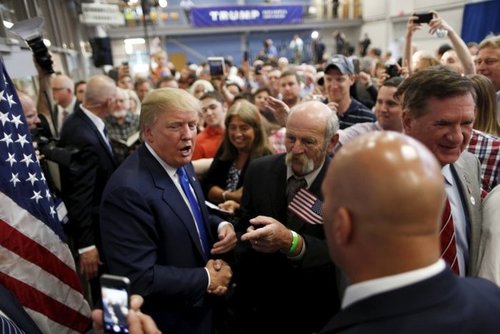 Many people have complimented me on correctly predicting on VDARE.com back in April that not only would Donald Trump run for President, but that he would be the only genuine immigration patriot in the race. I have to admit: it’s probably the only accurate political prediction I have ever made. But given that I am on something of a roll, let me make another.

Donald Trump has shot into the lead in the New Hampshire Presidential Primary, to be held February 1. He can easily seal the deal if he emphasizes the most Kafkaesque aspect of immigration policy that afflicts the American public and, in particular, northern New England: the Refugee Racket.

Yes, illegal immigration is a problem here. There are Mexicans working illegally on the big milk farms in Vermont, and on the fruit farms and fish processing plants in New Hampshire and Maine. But for the most part, illegal immigration is an issue that does not resonate quite as strongly in these parts as it does in, say, Texas or Georgia. The issue that really raises the hackles in northern New England: the thousands of Third World refugees that have been forcibly transplanted across the region over the last 20 years.

You’ve probably heard about how the once-charming city of Lewiston, Maine was suddenly transformed into a Little Mogadishu. But many other New England towns have suffered a similar fate: for example, Winooski, VT, a quaint suburb of Burlington which now has some 30 languages spoken in its public schools. Or Portland, ME which now has a violent African gang problem.

Today, New Hampshire (pop. 1.327 million) has over 7,500 Third World refugees from the Middle East, Africa, and Asia living in a handful of cities and towns, and virtually all of them are on public assistance. [Refugee Facts, Office of Minority Health, NH Department of Health and Human Services] Many of them are illiterate even in their own language and basic technology like indoor plumbing, central heat, and telephones are otherworldly to most of them.

Aside from the most committed Cultural Marxist, every Granite Stater knows that refugee resettlement has been a disaster. As my California-raised wife often reminds me, it takes a certain constitution to survive a New England winter. But social workers actually have to enter the refugees’ taxpayer-funded apartments and teach them how to use a thermostat. In schools, teachers have to instruct refugee schoolchildren on how to wear a hat, gloves and scarf during the winter.

No city in New Hampshire has been hit harder than its largest city, Manchester, a once virtually all-white metropolis of 100,000 with low crime and a good public school system where all the students spoke English. That all began to change in the late 1990s when the U.S. State Department and the refugee contractors labeled Manchester a “welcoming city” for refugees.

Unfortunately, most Americans still don’t know how the Refugee Industry operates. The refugee contractors—such as Catholic Charities, Lutheran Social Services, and the International Institute—approach the public officials in some unsuspecting town and, after tugging on their heart strings, propose resettling just a handful of refugees there. The contractors also promise to look after the refugees until they become “self-sufficient.” But the reality is that soon after the refugees arrive, the contractor, who has been paid by the federal government to facilitate their arrival, kicks them to the curb. It’s then up to the citizenry to subsidize and support a group of Third World illiterates who can never possibly support themselves.

Worse, when a contractor successfully targets your city or town that initial trickle of refugees will eventually turn into an overflow, given that the refugees can later petition to have their relatives join them. (The contractors also receive money from the State Department for every family member they can “reunite.”)

The consequences of refugee resettlement are most obvious in the public schools. Some 82 languages are now spoken in the Manchester school system, and refugee students are performing far behind their American peers.

Moreover, discipline has been a major problem with refugee children—something the Manchester School Department has been desperately trying to hush up. The most infamous example of this occurred in 2011 when an 8th grade girl, Morgan Graveline, had her jaw broken and front teeth knocked out by a Somali student after she rebuffed his sexual advances. [Parents Outraged After 12-Year-Old Daughter Suffers Vicious Bully Assault, The Blaze, March 6, 2011]

Last year, when one Manchester school tried to expel a chronically violent Sudanese boy, the Obama Justice Department intervened and accused the city of violating the student’s civil rights on the grounds that they did not provide an interpreter who spoke “Dinka” (a common dialect in Southern Sudan).[ Manchester student's expulsion creates a flashpoint, By Ted Siefer, UnionLeader.com, December 4, 2014]

The refugee problem in Manchester is so bad that surrounding towns are trying to wall themselves off from the city.

For example, nearby Bedford, NH is a well-to-do Republican stronghold that hasn’t elected a Democrat locally or nationally since 1932. New Hampshire has a version of public school choice, and for generations, Bedford residents tuitioned their students to Manchester West High School. However, several years ago Bedford had to construct their own high school because Manchester’s growing diversity had made sending their children there unpalatable. [Tense situation during lockdown at Manchester West High School, WMUR-TV, September 25, 2014]

These are the kind of costs immigration cheerleaders will never acknowledge.

So here we have an entire town of upper-middle class GOP votes up for grabs to the candidate with the courage court them. And yet no national candidate will ever bring up the refugee problem that is on the forefront of so many voters’ minds for fear of being called “heartless.”

Scott Brown ran for the New Hampshire Senate in 2014, and caused a temporary buzz with the strong pro-enforcement position he took on illegal immigration. (His opponent, Senator Jean Shaheen, remains a career “F-” on immigration). Unfortunately, Scott Brown refused to touch the subject of refugee resettlement during his campaign. He could have scored a knockout blow against longtime-refugee supporter Jean Shaheen if only he had the initiative to campaign on it.

That is not simply stupidity, it is cowardice. A candidate would have to be thoroughly deaf not to hear complaints about refugees on the New Hampshire campaign trail. This is especially true of presidential candidates, given that every presidential campaign has its headquarters in Manchester.

In the face of this Gatsas-led opposition, the refugee contractors began targeting the surrounding suburbs of Manchester, until the townsfolk got wind of it. Citizens and public officials in Dover, Rochester and elsewhere began to ask questions—too many questions—about the resettlement process…until the contractors finally decided that maybe these towns don’t have the “infrastructure” to accommodate refugees after all.

As the heroic Ann Corcoran of Refugee Resettlement Watch points out, the refugee resettlement process is shrouded in secrecy. They hate any inquiry by citizens or local government officials into the mechanics of resettlement. So if the refugee contractors encounter any organized resistance, they will likely stop targeting your city or town and target another. These people may be bullies, but like most bullies, they back down easily when confronted.

Let me emphasize the dirty secret of the Refugee Industry: these contractors are not really charitable organizations. They rely on taxpayer funding to fund just about everything they do. Is there anything more demoralizing for a people than to see their neighborhood transformed into Third World ghetto at their own expense?

Yes, a contractor like Catholic Charities will often speak loftily about the persecution these refugees are allegedly facing in their homelands. But such claims are usually groundless. In fact, many refugees often return to their homelands to vacation or even to wage jihad against the United States.

Obviously, many Americans have been waiting for a national leader who will finally speak up for them. The reason Donald Trump is so suddenly popular is because—whether deservedly or not—he fills this aching void.

If Trump is going to make immigration a winning issue in the New Hampshire Primary, then he will have to discuss the refugee problem—a lot. He obviously knows about the issue: he cited it in his recent position paper. If Trump raises refugees, he will win the New Hampshire primary in a landslide.

Even more importantly, Trump will have the opportunity to expose the Refugee Racket for what it is: one of the worst frauds ever perpetrated on the American people.