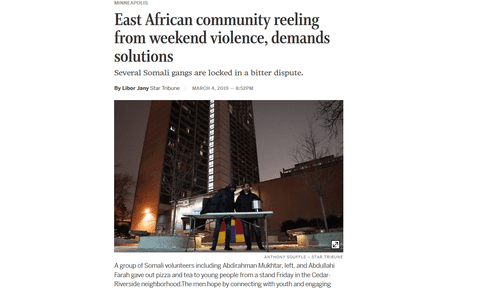 Well, It's Been a Quiet Week in Minneapolis, Minnesota ...Except For The African Gang Shooting At Each Other

Well, it’s been a quiet week in Minneapolis, Minnesota, my hometown, out there on the edge of the prairie, as the Somali Outlaws sex trafficking gang exchanged eye-for-an-eye shootings with the untouchable outcasts of the Madhiban With Attitude circumcision-performing caste.

With fearless Somalis much in the news, from the Minneapolis Star Tribune:

After the latest spasm of gang violence, Minneapolis’ Somali residents and business owners on Monday stepped up their calls for help from City Hall and police headquarters to help curb the senseless shootings that they say too often go overlooked.

On Friday alone, five men of Somali descent were shot in separate attacks, one fatally.

Police and community members pinned the blame for the bloodshed on an ongoing feud between Cedar-Riverside neighborhood gangs like 1627 and Madhiban With Attitude (MWA) and their rivals, the Somali Outlaws, whose territory includes the area around Karmel Mall.

Friday’s shootings were a repeat of a familiar pattern: a shooting on one gang’s turf is usually followed hours, if not minutes later by an “eye-for-an-eye” response so as not to appear weak, community members say. Two shootings last month are also blamed on the conflict.

As with other recent shootings, police immediately stepped up patrols in both neighborhoods to prevent further retaliation. But some in the community wondered whether they could be doing more.

Russom Solomon, owner of the Red Sea Bar and Restaurant, said that responsibility for curbing the violence falls equally on police and the community, but he questioned why the two Somali-American officers recently assigned to the Cedar-Riverside beat aren’t working nights, when many of the shootings occur.

“The problem we’re dealing with is that they work during the day and not during the night, so they’ve just had little effect,” said Solomon, who also chairs the West Bank Community Coalition’s safety committee. “The perception of safety is not good, people don’t feel that safe — they’re just poisoning the whole neighborhood now.”

The solution is obviously to hire the gangbangers as cops. Hey, it worked in A Clockwork Orange, didn’t it?

In response to the recent violence, First Precinct inspector Eddie Frizell said … “Cedar-Riverside is another example of collaboration,” he said. “I’ve had one-on-one conversations with the mothers and elders, and I’m getting a lesson in cultural hierarchy.” …

The latest shooting in the feud happened Friday night, when police say several members of the Somali Outlaws were shot, possibly for infringing on enemy territory. …

Many of the recent shootings have been carried out by 1627, a newer street crew that takes its name from one of the high-rises that juts above the ethnically diverse neighborhood of cafes, bars and furniture stores.

… “I have repeatedly heard from members of the Somali community that more beat officers, especially Somali beat officers, would be helpful,” Frey said. “I believe expanding on that is the right move.” …

Some residents shied away from talking about the gang violence because they worry that, much like with the upcoming murder trial of fired Minneapolis police officer Mohamed Noor for the fatal shooting of Justine Ruszczyk Damond and the recent high-profile prosecutions of young east African men bent on joining extremist groups in the Middle East and Africa, the Somali community will ultimately be blamed for the bad actions of a few.

Because clan wars are not representative of Somali culture. Whoever heard of Somalis in Somalia shooting at each other?

Frizell said his officers have been trying to educate community elders frustrated by the nuances of “the judicial system,” and explain why someone arrested for a violent crime could later be released to “wreak havoc on the streets.”

… For Abdullahi Farah, a local youth outreach worker, the problem starts at home, where parents struggle to connect with their American-born or raised children who find themselves without support after aging out of area youth programs.

“In reality the community is not really engaging the youth in a proactive way,” he said. “They react when there’s violence, but when there isn’t violence they’re not being proactive.”

Clearly, the solution is to hire more Somali youth outreach workers who know the word “proactive.”

In case you are wondering about the Madhiban With Attitude gang, from Wikipedia:

The Madhiban (Somali: Madhibaan), also known as Midgan, Midgaan, Mitjan, Muse Dheri or Gaboye, are an artisanal caste among Somali people. They have been endogamous, and their traditional hereditary occupation has been as hunters and circumcision performers.

They are also referred to as Madhibe, an appellation which is sometimes used pejoratively. The Madhiban have been one of the low status castes among the Somalis, along with Tumal and others.

… This caste is distinct from the Tumal and Yibir outcast communities because each is accused of things different from each other in Somali society.

The Madhiban were historically hunters, but now engage in occupations like leather work (shoemaking). They also are the traditional circumcision performers for both males, and females in the Somali society. These professions have traditionally been considered dirty, and the Madhiban have been a part of the sab or lower castes as opposed to the aji or upper castes.

According to Lee Gunderson, Dennis Murphy Odo and Reginald D’Silva, the Midgan have traditionally been treated as a low caste, scorned and reviled. A Midgan-Madiban has been deemed as polluting and therefore avoided as a taboo in the Somali society.

In 1890 Élisée Reclus, in his extensive work “The Earth and its Inhabitants: AFRICA” (Vol. IV, South and East Africa) described the Madhiban (Midgan) as follows: In still greater contempt are held the Midgans, called also Rami, that is to say “Archers,” who are universally regarded as the lowest of the low. They worship trees and snakes, and eat all the prohibited food, such as fish, fowl, eggs, hares, and gazelles. They are also daring hunters, fearlessly attacking the lion and the elephant, whom they pierce with their poisoned arrows. Like the Yebirs, the Midgans also practise medicine, and have the reputation of being extremely clever charlatans. According to the Somali legends, the lower castes are the issue of crossings between Abyssinian women and maleficent genii, while the Midgans are of still more degraded origin, their ancestors having been the slaves of these Abyssinian women.

Why aren’t Minneapolis cops sensitive to such basic cultural awareness?

Under the 1951 UN convention, several legal proceedings have ruled that Midgan as a low caste in Somalia are “akin to Dalits or the untouchables in India”.

In America
There are a few gangs, notably in Minneapolis, which call themselves the ‘Madhiban with Attitude’.