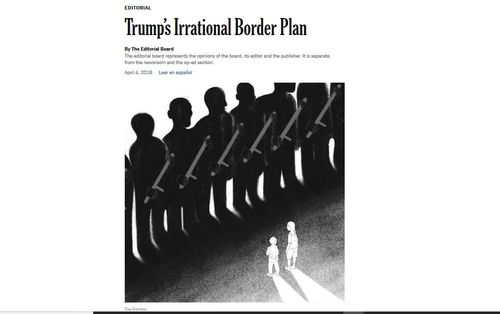 Also NYT: American Does NOT Need To Protect Its Borders—By Any Means At All.

Steve  Sailer notes below that the New York Times Opinion section has an Op-Ed titled Israel Needs to Protect Its Borders. By Whatever Means Necessary.

Here's' what they do say [Trump’s Irrational Border Plan, April 4, 2018]about the American President's plan to protect the borders of America with minimum force:

President Trump escalated his verbal fusillade against immigrants this week by announcing a foolish plan to deploy troops along the Mexican border. Such a move has at best a tenuous basis in law and none in logic, and it will burn through federal funds better spent elsewhere.

Mr. Trump has long stoked a xenophobic fear of newcomers among his political base. Ahead of the 2018 midterm elections, he seems increasingly desperate to find ways to compensate for his failure to deliver on his promise to build a “big, beautiful” border wall on Mexico’s dime.

And of course the NYT is still unwilling to admit that women in America are being raped by Mexican illegals, or that MS-13 gangsters are acting like animals.  When any instances of such behavior make the AP newsfeed, the NYT will always headline them "Man Arrested."