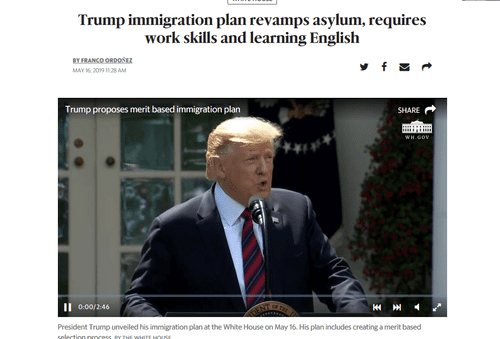 Earlier by Washington Watcher: Kushner’s Plan Maybe Not DISASTROUS For Immigration Patriots, But Trump Should Go Back To RAISE Act Anyway

President Trump finally announced Jared Kushner’s much-anticipated immigration plan Thursday. It’s not as bad as the catastrophic Gang Of Eight bill or the various Bush Amnesty proposals. But it’s still an assault on American workers, shifting focus now to the educated middle class, and on the Historic American Nation.

The bill aims to make America’s immigration system more “merit-based” and move us away from chain migration. The merit-based part means that it will rapidly increase the number of skills-based visas, such as the H1b, in its implementation. Kushner’s plan keeps the number of visas issued every year the same. However, the plan’s stricter requirements may result in a modest reduction in immigration.

It also makes an effort to curb illegal immigration.

“Our proposal is pro-American, pro-immigrant and pro-worker,” Trump said in his White House announcement speech. “It’s just common sense. It will help all of our people including millions of devoted immigrants to achieve the American dream.” [Trump immigration plan revamps asylum, requires work skills and learning English, by Franco Ordonez, McClatchyDC, May 16, 2019]

The plan itself has not yet been released. But based on Trump’s announcement, various news reports, and the Watcher’s sources, we can get a fairly good picture of what’s good and bad about the plan.

Weirdly, the notoriously passive Federation for American Immigration Reform tweeted. “With his plan, the President is making a long-overdue push to modernize immigration. Eliminating chain migration, merit-based immigration, building the wall, stopping asylum fraud—what's not to like?”

However, another Beltway herbivore, Center for Immigration Studies executive director Mark Krikorian was more negative in a press statement:

”This plan represents a very positive effort on immigration, and includes important provisions such as limits to chain migration, closing the loopholes that are allowing the flow of drugs and migrants at the southern border and a crackdown on visa overstays. It is concerning there was no mention of E-Verify. However, it is not likely to become legislation, but is rather a statement of the president's goals. As such, the fact that it does not even call for a modest reduction in total immigration, but instead offsets decreases with increases in 'skills-based' immigration, is very concerning.”

The good and bad of the deal make it similar to the Deferred Action for Childhood Arrivals (DACA) deal proposed by then-Congressman Bob Goodlatte. The Goodlatte bill would have given permanent residence to illegal aliens who received DACA in exchange for an end to chain migration, full wall funding, elimination of the diversity visa lottery, and mandatory e-Verify. It wasn’t ideal that those great things came in exchange for amnesty, but it was arguably better than nothing.

Most of the Republicans who have criticized it are squishy immigration boosters. For instance, Maine Sen. Susan Collins demands that it include amnesty for DACA recipients. But most of the immigration patriots in the Senate—such as David Perdue and Tom Cotton—support it. Sources say that the plan is a moderated version of the RAISE Act and was based on that legislation. The fact the Act’s two sponsors approve of the new plan give credence to that claim.

Pretty much everyone is in agreement that the plan won’t pass Congress. It is a plan to campaign on in 2020. The White House moderated the RAISE Act in order to unify the GOP on the issue. South Carolina Sen. Lindsey Graham said as much when he told Politico that the Kushner proposal is “not designed to become law.” The real intention, according to Graham, is “to unite the Republican Party around border security and merit-based immigration.” [Trump’s new immigration plan may be DOA — but it’s really about 2020, by Anita Kumar, Politico, May 16, 2019]

Graham is a born-again Trump ally—-AND an immigration booster. His favorable assessment signals the deal unites most Congressional Republicans.

The Kushner plan is better than expected. Only a few months ago, it appeared this plan would increase immigration and offer nothing to immigration patriots. Trump seemed poised to abandon any hint of his old immigration patriotism to become a hero to the Cheap Labor lobby. That assumption was thankfully mistaken.

The imperfect plan does signal that Trump and the Republican Party are committed to serious immigration reform without Amnesty. It’s a major improvement from where Republicans were in 2013.

But, as always, America’s future depends on immigration patriots outside the Beltway keeping up the pressure to end birthright citizenship—and, ultimately, enact an immigration moratorium.

And Trump will certainly find that this tricky effort to square the donor circle and his nationalist base is too complex to sell at his rallies. His rhetoric will shift—so we may see further progress after 2020.