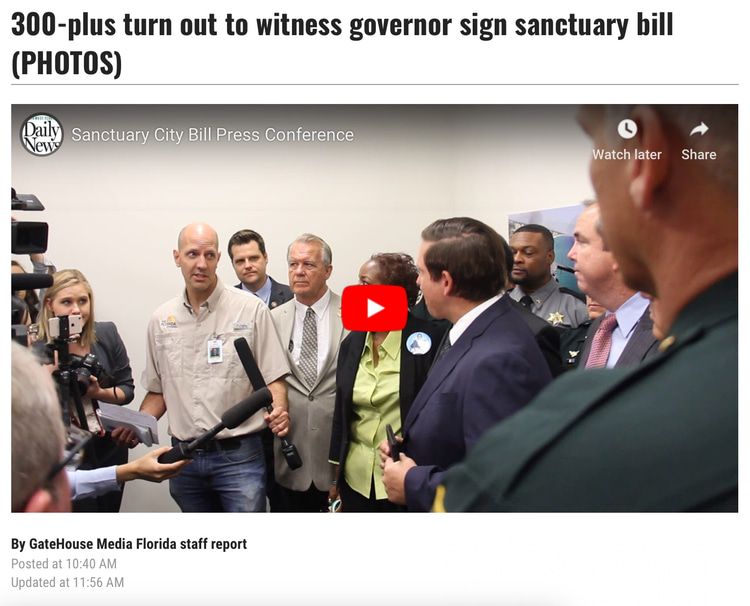 Governor Ron DeSantis is definitely a rising star in the Republican Party and just delivered on a major campaign promise. Sanctuary cities are thing of the past in Florida.

All law enforcement agencies in Florida will have to cooperate with federal immigration authorities under a bill signed by Gov. Ron DeSantis.

The bill, signed Friday, allows DeSantis to remove local officials from office if they adopt "sanctuary" policies that protect undocumented immigrants from deportation.

The legislation would require law enforcement to honor U.S. Immigration and Customs Enforcement detainers for undocumented immigrants who are arrested or convicted of a crime, exempting crime victims and witnesses.

The Republican DeSantis is a close ally of President Donald Trump, who has made illegal immigration a top priority.

The bill signing was held in Okaloosa County in the western Panhandle, one of the state's most conservative areas. An overflow crowd attended the bill signing, cheering wildly when Trump was mentioned.

Rep. Matt Gaetz, another GOP member with a promising future, was also part of the ceremony.

The political powerhouses were in town to sign the sanctuary cities bill, which requires state entities, local entities and law enforcement agencies to “use best efforts” to support enforcement of federal immigration law.

“Borders show were good ideas begin and where bad ideas end,” Gaetz said during his portion of the presentation.

Meanwhile, Gov. DeSantis is doing quite well among Florida voters, with only 24 percent disapproving and 62 percent approving according to an April poll. [A GOP strategist calls latest approval rating for Gov. DeSantis “remarkably high,” by John Lucas, The Capitolist, April 4, 2019] It remains to be seen if these figures will be affected by the governor's latest actions.

Still, immigration patriots have reason to grumble. Gov. DeSantis has thus far failed to implement E-Verify. This is not his fault necessarily; he also has to deal with the Florida legislature. Only 7 percent of "insiders" polled by the Tampa Bay Times think E-Verify will get through in 2020. [Florida Insider Poll: Abortion restrictions, school board term limits are coming in 2020, by Steve Contorno, Tampa Bay Times, May 23, 2019]

Scott Maxwell at the Orlando Sentinel aptly sums up what happened.

Immigration. Gov. Ron DeSantis promised to do something big on this issue – mandatory E-Verify to make sure Florida businesses hire only legal workers. But then the businesses that rely on cheap, illegal labor complained. So legislators decided not to make Florida companies follow the law. But they did scream a lot about illegal immigrants. And also about how we’re a “nation of laws!” (Unless, I guess, if you’re a business.) So there’s that.

This is the major problem facing immigration patriots, and the country. Governor DeSantis has been highly effective thus far. But the party he is a member of increasingly resembles a giant corporate lobbying organization rather than a movement dedicated to implementing its program. Even if the governor is entirely sincere, it's difficult for him to overcome the combined efforts of the GOP Cheap Labor Lobby and the Democrat Replace Americans Lobby.

This is why it is so important for President Trump to take up E-Verify. But thus far, as with so much else, no action.