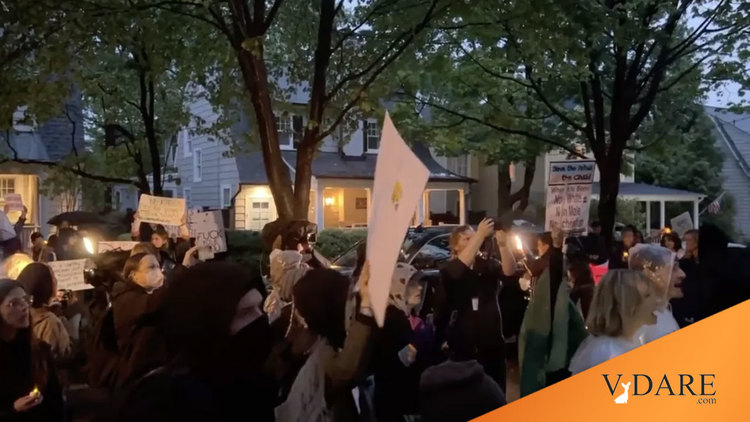 The leak of the draft opinion in Dobbs, raising the possibility that Roe vs. Wade might be overturned, has led to "activists" protesting in front of the homes of Supreme Court justices, which is illegal but the Biden DOJ is not interested [DOJ silent on abortion protests at justices' homes despite federal law prohibiting 'pickets' to influence case, by Kelly Laco, Fox News, May 10, 2022]. It's also un-American, in the sense that it's a Latin or Central American custom, rather than something you would expect in the US. 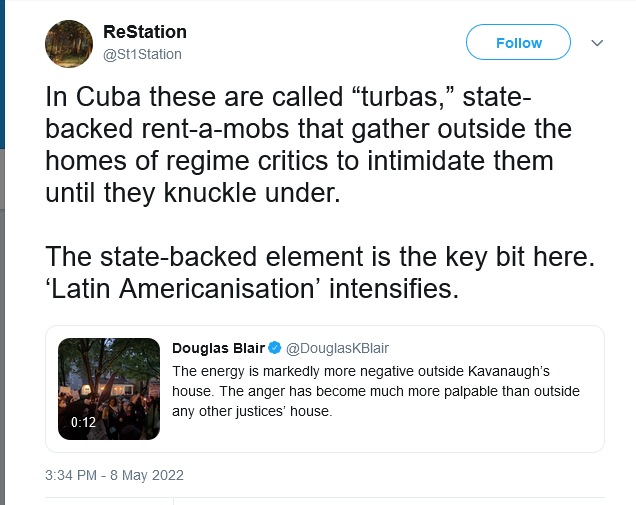 The energy is markedly more negative outside Kavanaugh’s house. The anger has become much more palpable than outside any other justices’ house. pic.twitter.com/zY2OY34hcA

This is exactly the tactic that communists, when they control the government, use against conservatives and patriots. The Turbas Divinas of Sandinista Nicaragua weren't, officially, government crackdowns on dissidents. But they were organized by pro-government community leaders, and went unpunished by the government.

The whole point of a turba is that it's on behalf of the regime, so the rioters don't fear punishment. Libertarian Dave Kopel described this in Nicaragua in 1987:

In Nicaragua however, many Americans cannot see who the heroes are, and who the bullies are. Government-inspired youth gangs called Turbas Divinas (divine mobs) regularly brutalize the peaceful opposition in Nicaragua. One victim was the dissident Father Bismark Carballo. Posing as a parishioner in need of counsel, a young woman went to Father Carballo's house. A few minutes later, a Sandinista security agent, posing as the woman's husband, arrived Father Carballo's house, and supposedly caught the Father in flagrante delicto with the woman. The police arrived, and forced Father Carballo to undress. A turba mob, conveniently waiting outside, dragged Father Carballo naked and bleeding through the streets while Sandinista television cameras (also coincidentally in the neighborhood) filmed the whole thing. From a nearby van, Interior Minister Tomas Borge and Security Chief Lenin Cerna orchestrated all the players.

The government uses the Turbas frequently, especially to break up opposition political rallies. When Turbas Divinas sacked the headquarters of Alfonso Robelo's Nicaraguan Democratic Movement, the Sandinistas censored all news of the event. No wonder Robelo, like many other leader[s] of the revolution against Somoza, concluded that armed rebellion against the Sandinistas was essential. Today, the Sandinistas make promises for Western consumption, about how the political process will be opened up. Then Daniel Ortega promises that when opposition politicians face the streets, they will have to face the turbas. [Emphases added]

[Nicaragua and the Sandinistas, DaveKopel.com, 1987]

This is the kind of tactic that leftist journalist Matt Yglesias (a sensitive soul who blocks VDARE.com on Twitter) approved of when it happened to Tucker Carlson in 2018: 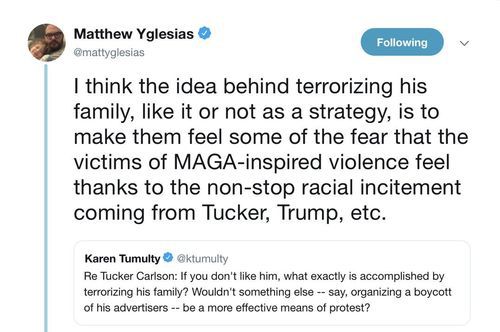 "MAGA-inspired violence" is of course paranoid fantasy, although I think Yglesias may have included illegals fearing deportation in that.

When Tucker Carlson was targeted by a mob outside his house, I wrote Tucker Carlson And The TURBAS: Unpunished Leftist Violence, Now Standard, Has Been Experienced By Dissident Right For Years.

I was writing about physical attacks and threats against Ann Coulter, Michelle Malkin, and Congressman Tom Tancredo—pro-illegal immigration Congressmen don't have to wear bullet-proof vests, the way Tancredo did (in 2011!)

I referred to these as "Minority Occupation Turbas" because the left tends to use mobs of color as shock troops.

These stories are from 2013, in which "protesters" went to immigration patriot Kris Kobach's home, and immigration anti-patriot Eric Cantor's home (Cantor, a pro-Amnesty Republican, wasn't doing Amnesty fast enough for them):

Some of the Roe protesters outside Justices' homes and disrupting church services may be white leftists, but not all by any means:

A protester held a bundle of baby dolls as she led a protest at the doors of the Basilica of St Patrick's Old Cathedral in Manhattan, NYC. She was blocked from going inside by a group of praying men. Vid posted by @ScooterCasterNY:pic.twitter.com/uIaFXBJpxR 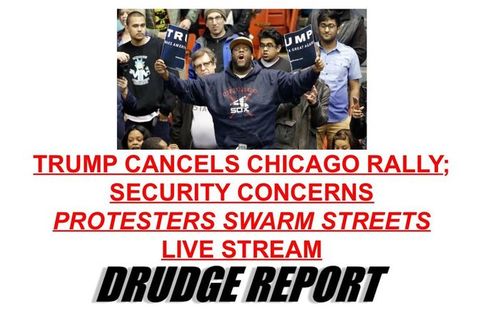 In spite of this intimidation, Trump was elected in November 2016. As a result, on January 6, 2017, there was concerted attempt to shut down the peaceful transfer of power in what became known as the J6 riots:

We covered those at the time with VDARE.com editor Peter Brimelow's

The reason I said "That's different" was because when there were riots during the Obama Administration, Obama supported them.

But it turned out not to be that different after all: none of the J6 "Black Bloc" protesters went to jail, largely thanks to U.S. Superior Court Presiding Judge Lynn Leibovitz—let the record show, a Bush II appointee.

Leibovitz forbade the prosecution from using phrases like “Antifa” and “Black Bloc,” and just before the jury went in for deliberations, threw out the felony riot charges.

Those same federal officials have waged a campaign of legal terror and physical brutality against the J6 Trump supporters who tried to stop The Big Steal. If one ever wanted to see an example of what the late Sam Francis called Anarcho-Tyranny, this is it.https://t.co/jAuR6mWoiU

So the breaking of "norms" by besieging people in their homes is nothing new for the Left. We already know that the answer to riots is arresting the rioters, and jailing them for their crimes. This can be done, by serious law enforcement officers and elected officials.

Remember, Donald Trump won the 2016 election in part because he was running against riots and rioters, as supported by Obama and Hillary.

The 2024 Presidential candidate might have a similar success running against riots, though he might have to say "And this time we mean it."

And if an anti-crime, anti-riot government is elected, it will actually have to act like it means it.

As for the Supreme Court, maybe these "protests" will inspire it to rethink not only their abortion jurisprudence, but also their longtime pro-crime jurisprudence.