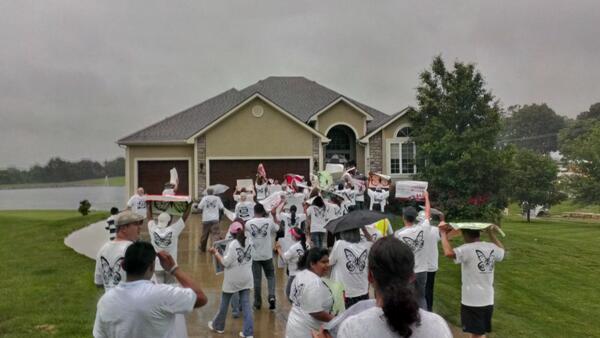 You know, as far as I’m concerned it’s fine if Tea Party groups show up at the homes of IRS officials now.

Posted at 9:18 pm by Glenn Reynolds

That's a link to this, from Michelle Malkin's Twitter-curating site, Twitchy.com:

“We found out where he lived and we came to visit him,” says a videographer before being herded back to a line of buses. Others left shoes on Kobach’s front steps to “symbolize all the fatherless families due to deportations” — as if trespassing en masse for the lack of a fence and then making demands wasn’t metaphor enough. It’s unclear if Kobach or his wife or four children were home at the time.

If you didn’t think that the thug-style tactics of “delivering a message” through mob intimidation were the Kansas way, we have news for you: that border’s wide open, and we’re all living in Chicago now.

Kobach has four little girls who might have been terrified by this.

I've compared this kind of activity to Nicaragua's  turbas divinas—government-controlled youth mobs who weren't officially part of the Nicaraguan government  of the 80s. [See The Fulford File | Tinley Park Attack: Anarcho-Tyranny In America] The problem is that the police won't arrest these people, and you can't protect yourself from them, or you yourself will be arrested. And certainly no one can take Obama to the Supreme Court over the violation of Kobach's rights. You see why we use the term "Minority Occupation Government"?

UPDATE: A reader writes "Nothing new here. They did the same to Francés Semler."

He includes a link to The Real Mrs. Semler [by Carolyn Szczepanski, pitch.com, October 11, 2007]

On September 5,[2007] a handful of immigrants' rights advocates, clergy members and local Latino leaders delivered a letter to Semler's home, asserting that she did not embrace cultural diversity and that only her resignation would allow the city to "heal."

The neighborhood president took it as an assault on her privacy and filed a police report. The incident left her "shaky for a day or two." She has since posted a "No Trespassing" sign on her garage.

Francés Semler was a 73-year old gardener and member of Kansas City's Parks Commission who was attacked for being a member of the Minutemen.