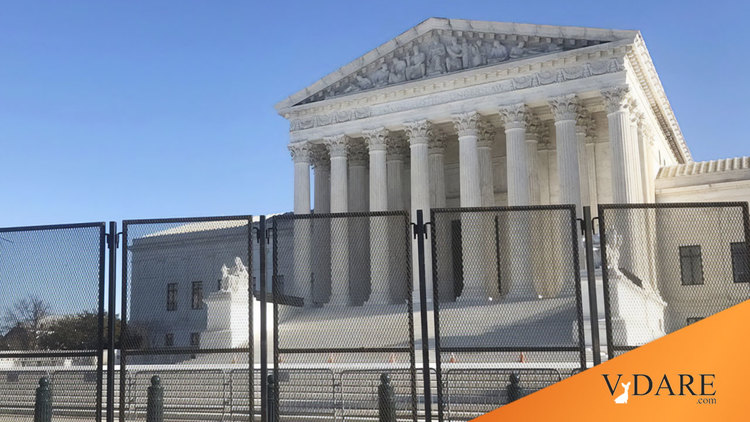 The U.S. Supreme Court will make history this summer if it overturns the 1973 Roe v. Wade decision that imposed unrestricted abortion nation-wide. The leaked draft of the opinion sent pro-abortion Leftists into foaming fits and has dominated news coverage all week. But this mightn’t be the only historic decision the court makes in the near future. Immigration and Affirmative Action are also pending cases. Thanks to the emergent American Kritarchy, SCOTUS now holds the fate of the country in its hands. Donald Trump’s appointees could either deliver decisions that put America and the Historic American Nation First—or capitulate to communist threats and intimidation.

The most immediate immigration case SCOTUS is considering: the challenge to “Remain in Mexico,” which Trump established to make “asylum” seekers wait outside the country while their applications are processed. It’s a proven deterrent to illegal immigration and keeps dubious asylum seekers—90 percent of them—out of America [Migrant Protection Protocols, January 24, 2019]. Of course, President Biden wants to get rid of it. But a Trump-appointed judge overruled Biden’s attempt to scrap it last year, and this was upheld by three Republican-appointed judges on the Fifth Circuit. As it will in Roe, SCOTUS is expected to rule this summer [Supreme Court Struggles Over Biden’s Bid to End ‘Remain in Mexico’ Program, by Adam Liptak, New York Times, April 26, 2022]. SCOTUS will also hear cases about immigration enforcement, such as whether illegal aliens are eligible for bond hearings [Justices will revisit whether certain noncitizens in lengthy detention are entitled to bond hearings, by Shalini Bhargava Ray, SCOTUSblog, January 10, 2022].

SCOTUS might also hear a case involving Title 42 public-health expulsions. The implementation of that law, imposed by President Trump during the China Virus panic to keep carriers out of the country, is making its way through the lower courts. Last month, U.S. District Court Judge Robert Summerhays, a Trump appointee, halted Biden Regime’s plan to scrap it, leaving it open to further legal challenges [Biden administration plans to comply with court order to stop planning to lift Title 42, by Julia Ainsley, NBC News, April 26, 2022].

In light of the expected Roe v. Wade decision, Texas Gov. Greg Abbott wants to challenge the ruling in Plyler v. Doe, which requires public education for illegal-alien minors. “I think we will resurrect that case and challenge this issue again, because the expenses are extraordinary and the times are different than when Plyler v. Doe was issued many decades ago,” he told a radio host this week. Plyler v. Doe was a 1982 case where the Supreme Court struck down a Texas law that barred illegal-immigrant enrollment in public schools [The demise of Roe wouldn’t endanger school access, legal scholars say, by Moriah Balingit, Washington Post, May 6, 2022].

1/3 I make a cameo WAPO appearance for pointing out that the legal reasoning in the BROWN school desegregation decree was just as specious as ROE. But the real news: TX Gov. Abbott is questiong PLYER, which forced states to educate illegal alien childrenhttps://t.co/9sY21Il16G

And some day, SCOTUS might take up Birthright Citizenship if Congress ends it, or if a Republican president does so via executive order, as Trump floated in 2018.

Beyond immigration, SCOTUS may also rule on other National Question issues. It has heard two challenges against racial preferences in university admissions this year, against Harvard University and the University of North Carolina, and so might issue a judgment on Affirmative Action. Plaintiffs allege the two colleges discriminate against whites and Asians with their admission preferences. The court’s decision could spell the end of racial quotas when it comes to university admissions [The Supreme Court adds Affirmative Action to its potential hit list, by Nina Totenberg, NPR, January 24, 2022].

Florida’s Stop WOKE Act might also come before the court. That bill prohibits teaching Critical Race Theory in schools and woke indoctrination training in the workplace. Left-wing activists have already filed a lawsuit against it [Minutes after bill is signed, lawsuit filed against DeSantis for 'Stop WOKE Act,' by Ana Goñi-Lessan, Tallahassee Democrat, April 22, 2022].

How might SCOTUS rule on these cases? Justices Clarence Thomas and Samuel Alito are reliable conservatives who will rule for the Historic American Nation. Chief Justice John Roberts is unreliable. Thus Neil Gorsuch, Brett Kavanaugh, and Amy Coney Barrett will literally decide the fate of the nation.

Federal judges have seized control of immigration policy, a fact even the mainstream media admits. During the Trump years, some judges felt emboldened to read a non-existent Open Borders clause in the Constitution and overrule any attempts to strengthen border security or immigration enforcement. Yet during the Biden years, federal judges have proven to be allies to immigration patriots [Why Judges Are Basically in Charge of U.S. Immigration Policy Now, by Jasmine Aguilera, Time, May 4, 2022]. Kritarchy is real, and that’s why the opinions of nine judges matter so much to America’s future.

Out of Trump’s appointments, Kavanaugh is arguably the best on immigration. He already had a solid record on the issue prior to his appointment. As a circuit judge, he defended American workers from foreign competitors and opposed the participation of illegals in union elections. He has maintained a respectable record as an associate justice. He voted against the court’s blocking Trump’s elimination of the Deferred Action for Childhood Arrivals (DACA) program, against striking down Trump’s proposed census citizenship question, voted for Trump’s tougher asylum rules, and voted for allowing Trump to use Pentagon appropriations to build a border wall.

Conversely, on immigration Gorsuch is probably the worst Trump appointment. Unlike Kavanaugh, he had a suspect record before joining the high court, with a reputation for ruling in favor of noncitizens against immigration enforcement. He says his immigrant wife (from England!) influences his views on the subject.

Gorsuch hasn’t really improved on SCOTUS. In 2018, he was the deciding vote to block a Trump measure that would have eased the deportation of illegals. In 2021, he wrote the opinion that sided with an illegal alien who had multiple deportation notices. Apparently, the deportation notices weren’t clear enough. Justice Kavanaugh called the conclusion “perplexing as a matter of statutory interpretation and common sense.”

Amy Coney Barrett agreed with Gorsuch on the case. Overall, Barrett has less of a record than the two other appointees. Before coming to the high court, the Center for Immigration Studies praised her for upholding the law [Those Favoring Judicial Activism on Immigration Will Likely Be Disappointed With a Justice Barrett, Center for Immigration Studies, October 5, 2020]. The 2021 case is one of the few times she’s made a substantial decision as an associate justice. She appears better than Gorsuch, but looks can be deceiving. She adopted two Haitian immigrants and says they affect her view of the law. At her confirmation hearing, she recalled crying with her adopted daughter over George Floyd and argued that “racism” is a huge problem in America. If Barrett  cries about a career criminal who died of a fentanyl overdose, and proclaims racism an ever-present problem, she might just think American white kids must be taught to hate themselves.

Of course, if God startles Barrett into a decision Atlantic Leftists like, that will be fine. If she rules, say, to overturn Roe v. Wade, there will be weeping & gnashing of teeth. Leftists only like religion in public square when it serves liberal ends.https://t.co/sUTmmgnHHI

As for Gorsuch and Kavanaugh, they are averse to racial preferences [Gorsuch, Kavanaugh, Barrett Offer Few Clues on Affirmative Action’s Future, by Marcia Coyle, Law.com, January 24, 2022]. Then again, Kavanaugh does have something of a soft spot, or soft head, when it comes to “racism.” He recently said the full benefits of American citizenship should be granted to residents of American territories due to the “racist” reasons for denying citizenship in the past. Leftist journalists argue that this reasoning is quite close to Critical Race Theory [Neil Gorsuch Has a Critical Race Theory About Puerto Rico, by Matt Ford, New Republic, April 27, 2022].

VDARE.com has bitter personal reasons to be skeptical of the courage of the Supreme Court. Moreover, it has ducked before, on Obamacare and on litigation arising from the 2020 election, especially Texas vs. Pennsylvania.

Still, SCOTUS may be poised to rule favorably for the Historic American Nation. Leftists are really worried that the Supremes will force Biden to enforce immigration laws and, even worse, gut Affirmative Action.

So now, with Roe v. Wade headed for the dustbin, the conservative legal movement must make immigration patriotism, Affirmative Action, and opposing CRT the new litmus tests for conservative judges.

We can’t hope to make America great again with judges who cry over black thugs who threaten pregnant women with guns.