Why Didn't The Minority Occupation TURBA (Mob Of Illegals) Show Up At Dave Brat's Headquarters? 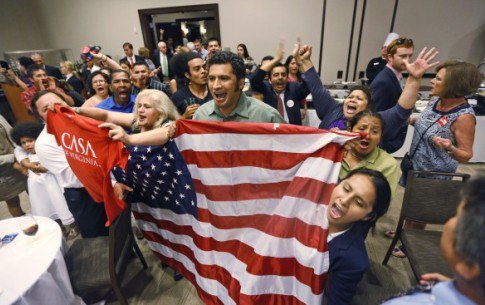 Eric Cantor (R. VA) was doing the best he could to surrender to the DREAMERs (whom he renamed KIDS) and the thanks he got was a bunch of them showing up to his home to protest.

I did a post about this, called Minority Occupation Turbas In America: Eric Cantor's Apartment Building Stormed By Mob. (The Sandinista government of Nicaragua in the 80s used to inflame mobs and set them on their opponents, these were called "turbas divinas.")

Well, after Cantor was defeated by Dave Brat, they did it again. See the video, below.

That's via progressive site Crooks and Liars, who seem to be OK with the whole mob thing. [Demonstrators Cause Fracas After Eric Cantor Concession Speech, June 11, 2014 ]

The question is, since Cantor is the pro-Amnesty candidate, and Brat is anti, why did they show up at Cantor's headquarters and not Brat's?

The final answer—which I am just guessing at, because it's too good to check: As for Cantor, if mobs of illegals want to pursue him after the election, they'll have go to his lobbyist's office on K Street—and bring money.