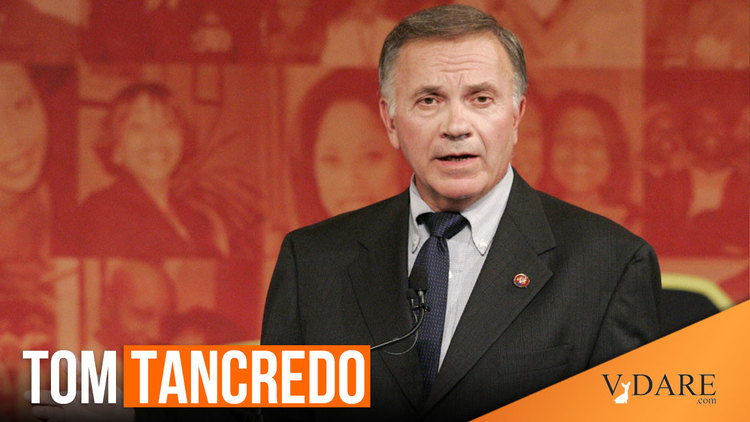 Tom Tancredo is fighting cancer. If you are a believer in God and country, please join me in prayer for a dear friend, mentor and patriot. While I cannot offer any comfort from his physical pain and suffering, I will do what I can with my words to lift up his indomitable spirit.

Three modern leaders stand out as the pillars of the America First movement: Pat Buchanan, Tom Tancredo and Donald Trump. Long before Trump triumphantly won the White House in 2016 by promising to protect our borders and enforce our immigration laws, Buchanan and Tancredo made these signature issues in their presidential runs (Buchanan in 1992 and 1996; Tancredo in 2008). Tancredo was the bridge between Buchanan and Trump, all of whom battled inside and outside the Republican Party on behalf of our national sovereignty.

A former teacher, five-term U.S. congressman, husband, father and grandfather, Tom made all the right (and left) enemies in the Swamp. Liberal open-borders shills and Southern Poverty Law Center smear merchants called him "hardline," "far-right," "extreme," "xenophobic" and "nativist" for doing what any American elected politician is sworn to do: secure the blessings of liberty for ourselves and our posterity first and always. He founded the Congressional Immigration Reform Caucus in 1999 to fight illegal immigration and uncontrolled, mass migration. At its peak, the group claimed 104 House members and seized power over GOP messaging from the pro-amnesty U.S. Chamber of Commerce and Wall Street Journal op-ed page (whose motto was "there shall be open borders").

As I've written before, long before so many Johnnies-come-lately started waking up to the dire national security, public safety, public health and economic threats posed by unbridled illegal and legal immigration, Tom led the fight on Capitol Hill. In 2001, he introduced a landmark bill for a mass immigration moratorium. In the mid-2000s, Tancredo was mobbed and threatened during college campus speaking events for calling out entitled illegal alien radicals and advocating targeted immigration reduction limits to combat terrorism.

George W. Bush's amnesty architect Karl Rove threatened Tom over his successful opposition to the ruinous Bush illegal alien giveaway, telling him he'd "never darken the White House doorstep" again. He triggered the outrage mob and the entire Bush clan when he went after soft-on-borders Jeb Bush (then-governor of Florida) in 2006 and dubbed Miami a "Third-World country." (Twelve years later, President Donald Trump would set off the same triggers when he rightly complained about the flood of immigrants coming from "s---hole countries").

Libertarian former GOP House Majority Leader Dick Armey openly bragged about censoring Tom while they served in the House together, telling a National Press Club audience in 2010: "When I was the majority leader, I saw to it that Tom Tancredo did not get on the stage because I saw how destructive he was." Destructive to the open-borders GOP donor base, that is. The silencing of true America First warriors by Conservatism Incorporated sellouts continues to this day, of course. Tom was a defiant cancel culture canary in the coal mine. He survived and thrived.

What Tom told me in 2014 when he ran for governor in Colorado holds true for every authentic America First Republican running for office: "The party bosses hate my candidacy because it represents a threat to their power and to the crony capitalists who want the government to supply them with cheap labor."

Tom's detractors in both parties accused him incessantly of "hate." But he is simply a lover of unvarnished truth. On the campaign trail, in the halls of Congress and in real life, he was and is one of the most genial and kind human beings I've had the privilege to know.

As I wrote to him in a text message last week while he was undergoing chemotherapy:

"I will never forget the kindness you showed me twenty years ago when I asked you to write an endorsement for my first book, Invasion. We have long shared a love for our country—and for Colorado, a place I've happily shared as a home for the past 14 years. I was so honored to support your run for governor and your fight against those trying to destroy this beautiful state. The forces of evil tried to cancel your voice time and time again but your voice will never be silenced. You always told it like it is! You have served our country so valiantly and left an indelible mark on the America First movement. Most importantly, you guarded your independence and integrity and always put family first."

In typical humble and cheerful Tom fashion, he replied: "Thank you so much ... I wish I could always live up to those accolades. God bless you." No, Tom. Thank you. We who carry the America First flame are eternally indebted to you. Godspeed.