This is a pivotal event. The organized left disrupted and shut down a large and peaceful Trump event with collusion of the media. CNN is covering it as Trump's fault of course and it's hard not to see this as a setup by the left-press and the usual dyspeptic suspects to create an incident in order to paint Trump as an extremist. My guess is that Trump's America is drawing a lesson from what they are seeing on their TV screens. Will they accept being muzzled by a collection of society's failures? If not, the next event may be bloody. 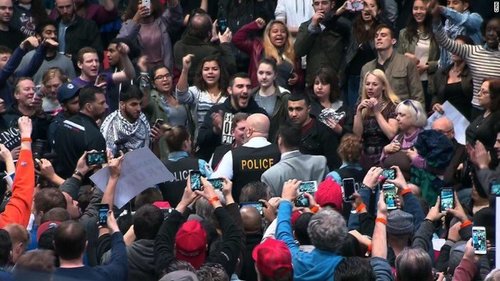 The supreme affront here is that the left is using exactly the same tactics of both the Nazis and the Communists in the 30's.

For those who like their daily Hitler analogy: Lefty brownshirts just forced cancellation of a peaceful Trump rally in Chicago.

This is textbook hooliganism, completely un-American (the Communist Party always used to do this at Socialist rallies.)

The clowns who shut down Trump tonight may just be recruiting a backlash they will not survive. The one thing Trump never had was any sort of goon squad. Traditional Americans who want to listen to Trump or other traditionalist voices are at a point where they must choose.

I'm typing this while it's all going on. About 8PM.

I'm watching the usual suspects disrupt Trump's event in Chicago. CNN was covering it in the manner one expects from them. Blacks, Latinos and usual bruised fruit of humanity were gathering to disrupt and CNN was already there to validate the disrupter just as they did in Ferguson, NYC and Baltimore. This is a setup, CNN obviously knew from contacts within the left that they were going to do this and they are incorporating this show event as part of their war on Trump.

OK, Erin Burnett, CNN's riot queen alumna from Ferguson, is controlling the coverage with David Gergen representing the sole quasi-American point of view. Sort of. In a peculiar development, some obscure Bush brother is providing droll and predictable anti-Trump commentary.

It will be no surprise to hear that Burnett and co. are laying the blame for the scuffles and the boorish destruction of a perfectly legal and orderly event at Trumps feet. Burnett and Co. are calling on Trump to "speak to the nation" and muzzle his American supporters. CNN is now openly colluding with political thugs of the left, disrupting a political rally while blaming any unpleasantness on the rally-holder for provoking the delicate sensibilities of the left.

After about half and hour in, Trump called off the event leaving his fans to stand around in close proximity to their tormentors.

The Trump crowd looked largely white and male. The protestors who infiltrated the event freely look to be a collection of blacks, white college types and Latinos. Protestors chanted "Bernie" "We stopped Trump" and various Latino slogans. A black activist stormed the stage and ripped up materials.

8:15 The hall has been emptied and the crowd of protestors are keeping their formation outside, clearly they are ready for more actions. 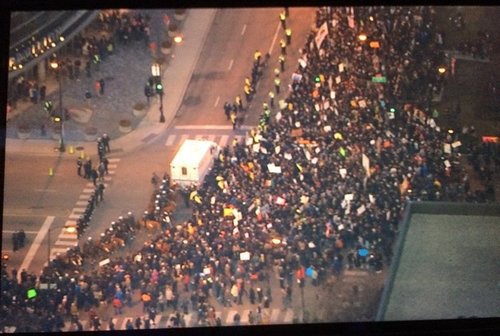 I predict that they are hopped up on their victory and will not just peacefully disperse. The usual breaking of store windows, random cars rolled and random attacks on whites can be expected. We'll see.

8:48 Move.Org Just announced that it played a central part in organizing the disruption of tonight's event. So George Soros helped make this attack on our Republic possible.

Gergen (hoping for a job in the Hillary Clinton administration) said, "Donald Trump has unleashed poisonous vapors," into America.

Maddow in full damage control mode Blames Trump for "Inciting violence." (Of course, holding a rally is always beyond the self control setting of the minority Chicago mentality.)

Chris Mathews find fault with Trump for holding a rally in an area with "So many illegal Aliens."!!!