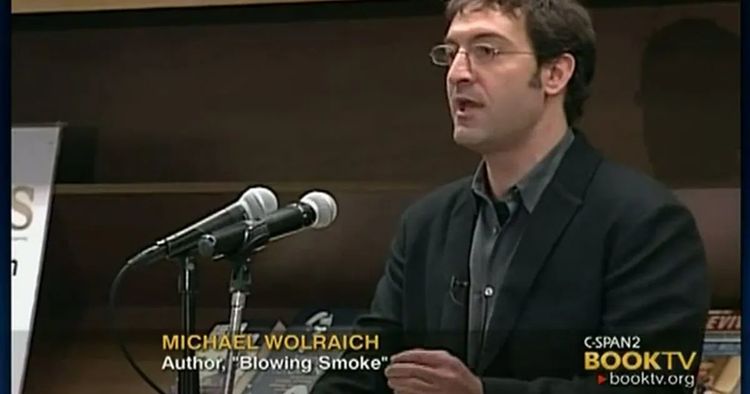 "First, I want to thank Michael for inviting me to participate in this book club, and for the kind words about me in Blowing Smoke."

Now, you're asking: who is Michael, what is Blowing Smoke, and who is Charles Johnson? 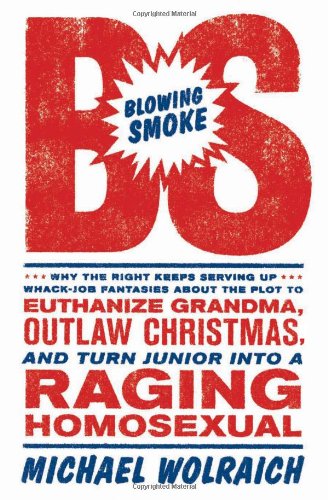 Michael is Michael Wolraich, author of Blowing Smoke: Why the Right Keeps Serving Up Whack-Job Fantasies about the Plot to Euthanize Grandma, Outlaw Christmas, and Turn Junior into a Raging Homosexual, which must have been written before the New Civility. (Ha, ha! I know there's no New Civility, and if there were, guys like Wolraich wouldn't be expected to participate.)

And here are the excessively "kind words" about Charles Johnson in Blowing Smoke:

"Charles Johnson is another brave critic. He founded Little Green Footballs, one of the earliest and most popular conservative blogs, which served as an inspiration to many of the right-wing bloggers who followed him. During the Bush administration, Johnson aggressively promoted the Iraq War and Bush's antiterrorism policies. But in 2009, he began to criticize the paranoid right, including Glenn Beck, Ron Paul, and some of the popular bloggers whose careers he had once fostered. Finally, in November 2009, he officially split with the right, citing the growth of racism, homophobia, conspiracy theories, hate speech, and other hallmarks of persecution politics. He wrote. 'The American right wing has gone off the rails, into the bushes, and off the cliff. I won't be going over the cliff with them.'"

Or putting it another way, Johnson is a notorious turncoat and wowser. (The reason that Wolraich calls him "another" brave critic is that Wolraich had just been talking about David Frum.)

Here's what Johnson is writing about

"[T]here's also a new type of right wing tribalism at work today, enabled (as so many things are) by the Internet and social networking technologies. This new tribalism is an extremely effective means to propagate persecution politics. The speed at which memes can be generated and disseminated throughout the networked tribe means that the tribe is able to come up with talking points and counter strategies almost immediately in response to any situation—and these strategies often involve casting the tribe as victims of persecution by the outsiders."

But in the paragraph above this one, wowser Johnson interrupted his idiotic point about the "new type of right-wing tribalism" to engage in a little persecution of the "old style 'blood and soil' tribalism "(previously known as patriotism).This patriotism, also known as "xenophobia" or "nativism" to people who hate America, is

"[O]ne source of the constant bubbling up of racist memes from the far right. There are some well-known conduits through which this xenophobic nationalism is laundered to appear more respectable and more appealing to the mainstream, organizations and websites such as VDARE and American Renaissance that try to give their overtly racist (their term for it is 'racialist' or 'race realist') material an intellectual gloss. And there are some influential right wing commentators with ties to these groups; for example, Michelle Malkin, who boasts at her website of her close friendship with VDARE founder Peter Brimelow, and Ann Coulter, who defended the white supremacist Council of Conservative Citizens."[Links in original]

So even in an article denouncing conservatives for feeling persecuted, Johnston can't stop himself from engaging in persecution.

Indeed, where persecution means for people to be purged, disavowed, to have their columns or speaking engagements cancelled or be fired from their jobs, Charles Johnson is one the worst offenders—see Brussels Journal Too Belgian (Or Flemish) For Little Green Footballs. This is what was commonly called McCarthyism when a much maligned Senator was investigating foreign agents in the Federal Government.

But the enthusiasm that these people have for having us fired, shunned, and silenced isn't the worst part—many of them endorse and condone actual violence against their political opponents.

Canadian blogger Kathy Shaidle points out that being a conservative requires Ann Coulter "to take the stage with bodyguards" and Glenn Beck "to wear a bullet proof vest and carry a handgun." Tom Tancredo also has a bullet-proof vest because of many specific, serious, threats against his person.

Ann Coulter is not paranoid—she has a well-founded fear that if you're a conservative speaker, people will mount the stage to attack you physically, liberal pundits will cheer them, and the police will do nothing, because all this has already happened to her. See her articles

When Vanity Fair's James Wolcott saw video of the pie attack on Coulter, he exulted "The skank can shift ass on a dime" [Democratic Underground, October 23, 2004], this being the only part of his blog that I can bring myself to quote. Other liberals were similarly approving, as Michelle Malkin reports in her book Unhinged. Outside of a Hollywood movie, pie attacks are not actually funny—while intended to be merely humiliating—sexually humiliating, according to Wolcott—a physical attack by two men on a frail woman can easily be fatal.

An early example of liberal hatred and indifference to conservatives' safety is the hatred churned up against Herbert Hoover in 1932, by liberal saint FDR:

"After this, Mr. Hoover, now rid of his great burden, shook hands with the new President and left at once for Philadelphia and later for his home in California. Despite the bitter emotions churned up against him, he left without any Secret Service guard, his secretary's request for that having been graciously refused by the government he had headed but a few minutes before."[The New Dealer Takes The Deck, Ch. 1, The Roosevelt Myth, by John T. Flynn]

Edith Efron's seminal book of media criticism The News Twisters (1971) pointed out that when George Wallace, campaigning for the Presidency, was greeted by people throwing rocks and pop bottles, the MSM reported this as "protests" rather than attacks. Later, after years of MSM demonization, Wallace was actually shot by a man called Arthur Bremer. 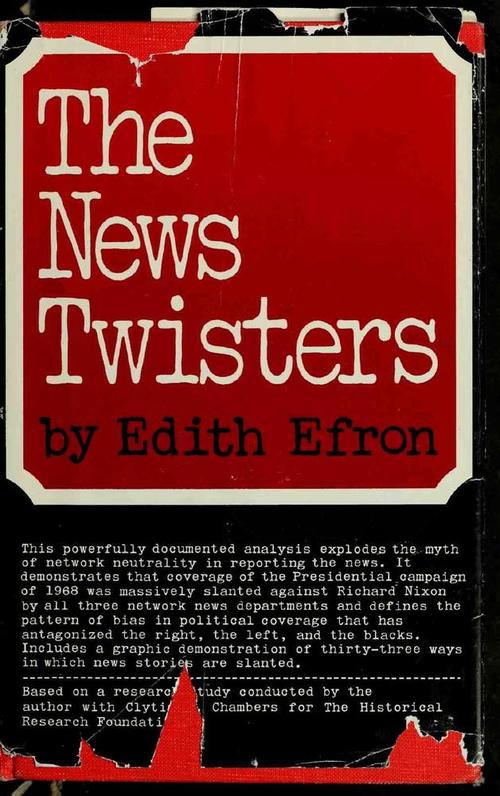 I quoted Efron last year, when after thousands of words of MSM reporting about some Tea Partiers calling congressman a deplorable name, (which they didn't) and one Tea Partier was accused of spitting on a Congressman, (which he didn't) there was a comparatively under-reported incident in which a man had his finger bitten off by a MoveOn.org Obamacare enthusiast. There was also an under-reported incident in which an immigration restrictionist was physically attacked by a mob of immigration enthusiasts [Small Riot Breaks Out at Immigration Protest, MyFoxPhoenix.com, April 23, 2010]

The Gabrielle Giffords shooting was used as a stick to beat Sarah Palin and conservatives in general. But no one stopped to reflect that the New York Times's Linda Greenhouse had compared Arizona legislators to Nazis. (Wisconsin Republican legislators are in hiding at this moment after being compared to Nazis, but this is not quite the same thing—their offence was to threaten to cut unionized teachers' pay.)

At this moment several Utah legislators, including Stephen Sandstrom have received death threats, apparently from pro-immigration groups: Several Utah lawmakers receiving death threats, by Ben Winslow, Fox13Now.com, February 15, 2011.] Something called the "United Front for Defense of Immigrants" sent the threats with pictures of Che Guevara and an AK-47.

Sandstrom has been accused of having ties to a "hate group" by the SPLC: Utah immigration bill alleged to have ties to extremist groups, By David Montero, The Salt Lake Tribune, December 18 2010. The so-called "hate group" is not a terrorist organization—and it's not us, either, it's the Immigration Reform Law Institute. Only a paranoid chain of guilt-by-association can make IRLI sound hateful.

But do the threateners know that? Or do they take the $PLC at face value? You see, if we were actually the Nazis of World War II infamy, or the Invisible Empire of the Ku Klux Klan, with its whips and torches and so on, there might be some justification for the crazed hate of some of these people—like the hateful "anti-hate" group called the SPLC. There might be some justification, even, for violence against us. (Several members of my own family committed violence against the actual Nazis in World War II. Peter Brimelow's father spent four and a half years chasing Rommel in the Western Desert.)

But since we're not any of these things, being dedicated to the rule of law, democracy, civil liberties, and so on, is there any justification for the SPLC and Little Green Footballs to say we are?

Don't they bear any responsibility for inspiring hate against us?

Doesn't the saga of Jared Taylor and the suppressed American Renaissance Conferences sound a lot more like persecution than "Persecution Politics?"

No, Charles Johnson is wrong—if we have a persecution complex, it's because people like him, Ezra Klein's TPMCafe, and the SPLC are persecuting us. And many of us have the persecution marks to prove it.

Especially the guy who got his finger bitten off.