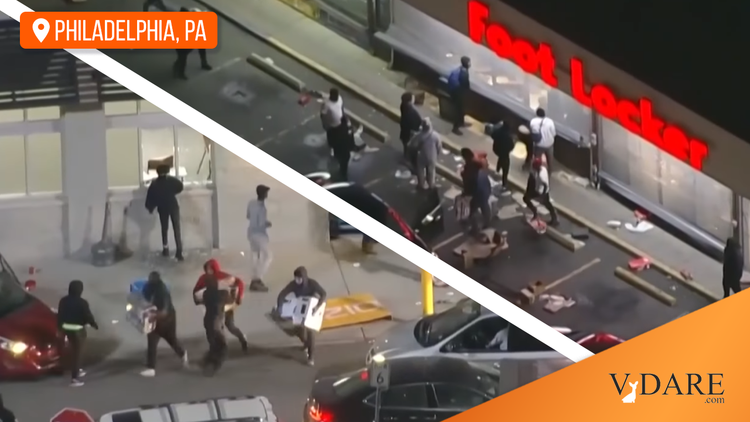 Philadelphia was under curfew last night and Danielle Outlaw, the black lady police chief newly hired after her stellar performance in Portland OR, is breast-beating about her force’s need for more mental health social workers [Philadelphia pledges better response after shooting death of Walter Wallace Jr., 6ABC.com, October 29, 2020]. Of course, this is completely irrelevant to the beat cops’ urgent need to protect themselves from Walter Wallace Jr., the “aspiring rapper” who attacked them with a knife, and to the city’s imperative need to assert law and order—the absence of which most hurts decent blacks, as Thomas Sowell has pointed out—if necessary by ruthless coercion. Riots are the new normal for America if President Trump is not re-elected—and maybe if he is. But Joe Biden tepidly condemned the recent riots only after expressing “shock and grief” about “another Black life in America lost” [Biden, Harris Express ‘Shock and Grief’ Over Police Shooting of Walter Wallace Jr., by Brian X. McCrone, 10 Philadelphia, October 27, 2020].

This was a fairly straightforward incident of an armed criminal being put down by police. If even this causes riots that the authorities are too Politically Correct to stop, every interaction between police and blacks can turn into an inferno. It means this country is on a permanent war footing.

One of the bizarre undercurrents of the Black Lives Matter movement is how the “victims” seem to be declining in quality. George Floyd had a lengthy criminal record, held a gun to a pregnant woman’s stomach, and died from a drug overdose but at least the initial video (dishonestly presented by the MSM) portrayed him as sympathetic. Someone could at least say that regardless of a person’s criminal record or evasive behavior, police shouldn’t be allowed to act in a certain way.

Then there was Jacob Blake, who was shot by police after his girlfriend called in a domestic violence dispute. He broke away from officers and reached into a car, something that would get just about anyone shot. Nonetheless, because he was at least shot in the back, Democrat vice-presidential nominee Kamala Harris could meet with the family for what Ben Crump called an “inspiring and uplifting visit” [Kamala Harris meets with Jacob Blake’s family in Wisconsin, by Jason Silverstein, CBS News, September 8, 2020].

Now, there’s Walter Wallace Jr., who had a long history of abusing and threatening women, including family members. He approached police with a weapon. What do you think is going to happen?

The #MeToo movement, which saw celebrities and powerful men broken because of charges made decades after the infractions allegedly happened, has seamlessly transitioned into #BlackLivesMatter. Now, the new saints of America’s modern state religion are men who threatened women with violence or death—but that doesn’t seem to matter.

Contrast these weird cults with the Main Stream Media backout of murdered whites like Rowan Sweeny (four years old), Cannon Hinnant (five years old), and Wilma Hochstetler (mother of four children, the youngest of whom said “I wish they didn’t shoot my mommy”).

They were white—so their lives don’t matter to our Ruling Class.

I suspect MSM journalists take a positive pleasure when they choose to ignore white deaths, or dismiss them as random. While blacks riot in reaction to the deaths even of those who prey upon their own community, whites are too intimidated to even speak in defense of their innocents. Indeed, I hesitate to even write these words lest I bring additional misfortune on these families who are already suffering the torments of the damned and the scorn of a sick society.

The expectation from many Trump supporters is that the violence in Philadelphia will automatically help the president capture the Keystone State. But this is not certain.

Certainly, the Trayvon Martin case or the Ferguson riots “redpilled” many people who would go on to join the Alt Right or support Trump’s 2016 campaign. However, these occurred at a time when there was far less platform control by the Left and far more free speech online. Since then, MSM Journofa have been largely successfully in deplatforming people like Stefan Molyneux, who could push back against MSM narratives about innocent blacks that police were supposedly shooting for no reason. This summer, President Trump appeared to have lost support when the Black Lives Matter protests escalated [“Trump Could Not Be More On The Wrong Side”: New Poll Shows Trump’s Black Lives Matter Protest Response Could Cost Him 2020, by Peter Hamby, Vanity Fair, July 24, 2020]. He has never led Joe Biden in the RealClearPolitics aggregate of national polling since early spring and the COVID-19 pandemic.

Of course, Dem/MSM narratives surrounding the riots are self-contradicting. Sometimes we are told riots are justified. Other times, they weren’t really happening. Occasionally, we hear that they were actually sparked by white supremacists [Media and politicians blame white supremacists for black violence, by Robert Hampton, American Renaissance, August 16, 2020].

Anyone paying attention, which obviously includes Trump supporters glued to their Twitter/Parler/Gab feeds or reading Dissident Right websites, will see the obvious lies. However, most Americans are not paying attention, especially because they are struggling economically from the coronavirus pandemic and the economic effects of the lockdowns [Trump or Biden’s big economic challenge: millions of struggling Americans, by Jonnelle Marte, NASDAQ, October 28, 2020]. They simply get media-packaged videos of chaos and vague warnings about racism or violence against “black bodies.” These fade into the background of life. The implication behind all these contradictory and confusing messages: all this is somehow all President Trump’s fault.

As Joe Biden put it in his campaign message/blackmail note to the American people:

The takeaway many voters have: if Joe Biden is put back in the White House, the bad things will simply go away. This message is especially compelling to relatively affluent suburban voters and white women who don’t have to witness or live with the consequences of urban rioting, but who know who are the good guys and the bad guys from the moral scolds masquerading as journalists and late-night television hosts [Why Trump Is Losing White Suburban Women, by Meredith Conroy, Amelia Thomson-DeVeaux, and Erin Cassese, FiveThirtyEight, October 20, 2020].

Of course, these are the same people the late St. George would have felt no compunction about preying upon.

There is a flip side to this—the so-called shy Trump voter [‘Shy’ Trump voters will power his win, says pollster who called 2016 race, by David Knowles, Yahoo News, October 23, 2020]. Rasmussen did find that many likely voters who “strongly approve” of President Trump’s performance remain silent about their voting intensions [Trump Voters Are Staying Silent Again This Year, Rasmussen Reports, September 9, 2020]. Indeed, about two-thirds of Trump supporters polled in New Hampshire (!) said they would not display a yard sign or a bumper sticker out of fears of vandalism--and those are just the people who are willing to say they support the president [Two-thirds of Trump Supporters Won’t Put Up Yard Signs Over Vandalism Concerns: Poll, by Benjamin Fearnow, Newsweek, October 24, 2020].

There is a direct connection between this fear and the Black Lives Matter phenomenon—after all, in some areas, it is now a criminal offense to call the police on blacks if someone determines the complaint is “racially motivated.”

Of course, by definition, the only way to know how many of these “shy Trump voters” there are is to wait for Election Day. Unless there are a lot of them, the polls are mostly right, and a Democratic Administration and its confused frontman will take office in January.

If that occurs, what makes people think that riots will stop? Joe Biden, because of his past “tough on crime” stance, will be helpless before the monolithic black lobby. His running mate Kamala Harris can hardly wait to shove him out of office. Frustrated progressives who held their nose to vote for the old, white neoliberal will have no reason to hold back now that Trump is out of the White House.

If riots worked to drive out Trump, they could also work to drive out Biden. We may see even greater disorders, which will be met by even greater crackdowns on whites to prevent them from discussing what’s going on, calling the police, defending themselves or even moving away from violent populations.

This may be the last quasi-free election the country ever has. There is no reason for BLM organizers, Antifa, or just random criminals to stop rioting. They know they will get away with it. VDARE.com Editor Peter Brimelow predicted that the Left’s temper tantrum at Trump’s inauguration, if not checked, meant “it will come to blood.” If anything, that may be too optimistic. It’s more likely that it will end in tyranny—all the more disgraceful because modern post-Americans, unlike our revolutionary forebears, lacked the moral courage to resist even by voting in secret.