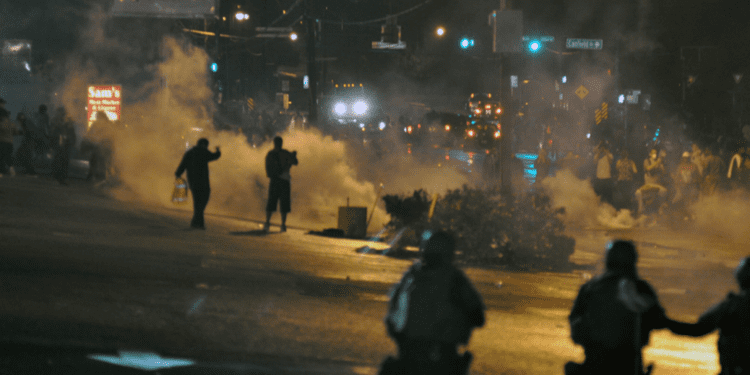 Now that the Ferguson grand jury documents have been made public, even MSNBC has had to quietly drop its fantasy of Michael Brown being gunned down like a dog in the street by Officer Darren Wilson. Instead, MSNBC is defending the looters.

On Monday night, MSNBC's Chris Hayes objected to anyone referring to the people who "set fires or looted as 'thugs.'"

His guest, former Seattle chief of police Norm Stamper, said, "I could not agree more." (Stamper did such a bang-up job dealing with the World Trade Organization riots in 1999 that he was forced to resign—which may explain why he is the left's favorite police chief.)

Hardworking black people in Ferguson poured their lives into their stores, depended on them to support their families and shopped at them to improve their quality of life. I wonder if they appreciated Hayes' principled opposition to calling the arsonists "thugs."

There's a reason so many black people supported Officer Wilson's account and that a black woman walked into a burning convenience store in the middle of the riot to extinguish the fire with gallons of milk.

In "Mugged: Racial Demagoguery from the Seventies to Obama," I told the true stories of dozens of allegedly racist crimes sensationalized by the media. In almost all of them, there were unheralded black heroes who stood up for law and order against "the community."

When Exeter student Edmund Perry got himself killed by mugging a cop, at least a half-dozen black witnesses supported the cop's version. While The New York Times was droning on about Perry as "a prized symbol of hope," Perry's black neighbors were testifying to the grand jury that his brother admitted they had mugged a cop.

At least three black friends of the Central Park rapists told the police that the defendants had confessed to attacking the jogger. (In what must have been an oversight, those witnesses didn't make it into Ken Burns' movie.)

A young black woman, who was in Bernie Goetz's subway car with her husband and child when Goetz shot four black muggers, told the jury, "Those punks got what they deserved."

Goetz's lawyer Barry Slotnick made no effort to keep blacks off the jury. His faith was rewarded: Goetz's biggest defender on the jury was a black bus driver from Harlem. It is well known by prosecutors that working and married blacks make great jurors.

But we never hear about those black people. Why, that would spoil everything!

There are loads of movies about black criminals—rewritten the way the media were hoping the story would come out, but didn't. (Movie: "Murder Without Motive: The Edmund Perry Story." Spoiler alert! The tale of a racist white cop who shot an innocent black honor student for no discernible reason.)

How about a movie paying tribute to the African-American eyewitnesses in Ferguson who told the truth to the grand jury?

Who speaks for them?

It's sure not Sen. Rand Paul.

We need video footage of blacks burning other blacks' stores down juxtaposed with clips of Sen. Paul saying that the reason "three out of four people in prison are black or brown" may be "because of the color of their skin or their economic status." Another possibility—I'm just throwing it out there—is that the reason black, brown or white people are in prison is because they've committed crimes.

Improving their "economic status" doesn't seem to help. The two men arrested for trying to buy bombs in Ferguson in order to blow up the Gateway Arch and kill the prosecutor and chief of police were prevented from buying as many bombs as they had hoped because they needed to wait for more money to be transferred onto a girlfriend's EBT card (Electronic Benefits Card—food stamps).

For claiming the drug laws are racist, Sen. Paul seems to imagine his portrait is being hung in black homes across America, between pictures of Martin Luther King and John F. Kennedy. "White people do drugs too," Paul tells admiring white liberals in the media, "but either they don't get caught or they have better attorneys or they don't live in poverty."

If Rand Paul thinks black people are rooting for black crack dealers to go free, he's even crazier than his old man.

It was African-Americans, exploding in rage at the devastation crack was inflicting on their neighborhoods in the 1980s, who demanded severe penalties for crack cocaine. In a typical news story from 1986, Julius Lee, the black city commissioner in Fort Pierce, Florida, said, "Drugs are terrible things, but these cocaine rocks are the terriblest of the terrible." Black grocer Eugene Gibson sadly remarked, while sweeping the sidewalk in front of his store, "We're in a world of trouble here. ... It's these cocaine rocks."

A few years later, in 1989, black columnist Dorothy Gaiter perfectly expressed the feelings of the (non-crack dealing) black community in The Miami Herald: "Crack sellers should be locked up and their bounty taken away from them. The jails are crowded with murderers and others who deserve to be there, but the crack seller is a murderer too. He's a lethal seducer of our young, a destroyer of our neighborhoods. Being poor is no crime and should not result in a sentence to live among the lawless."

But now Sen. Paul is pushing the idea that the drug laws black people begged for were actually part of a racist plot to lock up African-Americans. It's like something out of Maxine Waters' dream journal.

The only people impressed with Rand Paul's defense of black criminals are the ones who will never be victimized by them.