"#MeToo" is the social media meme of the moment. In a 24-hour period, the phrase was tweeted nearly a half million times and posted on Facebook 12 million times. Spearheaded by actress Alyssa Milano in the wake of Hollyweird's Harvey Weinstein sexual harassment scandal, women have flooded social media with their own long-buried accounts of being pestered, groped or assaulted by rapacious male predators in the workplace.

It's one thing to break down cultural stigmas constructively, but the #MeToo movement is collectivist virtue signaling of a very perilous sort. The New York Times heralded the phenomenon with multiple articles "to show how commonplace sexual assault and harassment are." The Washington Post credited #MeToo with making "the scale of sexual abuse go viral." And actress Emily Ratajkowski declared at a Marie Claire magazine's women's conference on Monday:

"The most important response to #metoo is 'I believe you.'"

No. I do not believe every woman who is now standing up to "share her story" or "tell her truth." I owe no blind allegiance to any other woman simply because we share the same pronoun. Assertions are not truths until they are established as facts and corroborated with evidence. Timing, context, motives and manner all matter.

Because I reserve the right to vet the claims of individual sexual assault complainants instead of championing them all knee-jerk and wholesale as "victims," I've been scolded as insensitive and inhumane.

"TIMING DOES NOT MATTER," a Twitter user named Meg Yarbrough fumed. "What matters is what is best for EACH INDIVIDUAL victim. You should be ashamed of yourself."

CNN anchor Jake Tapper informed me, "People coming forward should be applauded." But applauding people for "coming forward" is not a journalistic tenet. It's an advocacy tenet. Tapper responded that he was expressing the sentiment as a "human being not as a journalist." Last time I checked, humans have brains. The Weinstein scandal is not an excuse to turn them off and abdicate a basic responsibility to assess the credibility of accusers. It's an incontrovertible fact that not all accusers' claims are equal.

Some number of harrowing encounters described by Weinstein's accusers and the #MeToo hashtag activists no doubt occurred. But experience and scientific literature show us that a significant portion of these allegations will turn out to be half-truths, exaggerations or outright fabrications. That's not victim-blaming. It's reality-checking.

It is irresponsible for news outlets to extrapolate how "commonplace" sexual abuse is based on hashtag trends spread by celebrities, anonymous claimants and bots. The role of the press should be verification, not validation. Instead of interviewing activist actresses, reporters should be interviewing bona fide experts. 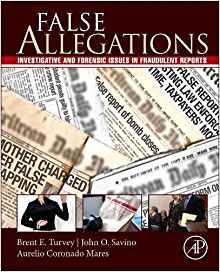 Based on their review of decades of scientific literature, Turvey and his colleagues explode the "2 percent myth" peddled by politicians, victims' advocates and journalists "claiming that the nationwide false report rate for rape and sexual assault is nonexistent." In fact, the statistic was traced to an unverified citation in a 1975 book by feminist author Susan Brownmiller.

"This figure is not only inaccurate," Turvey and his co-authors conclude, "but also it has no basis in reality."

Published research has documented false rape and sexual assault rates ranging from 8 percent to 41 percent. Savino notes that in his NYPD's Manhattan Special Victim Squad, "our false report rate was in the double digits during all of my years. Sometimes, it was as high as 40 percent." Turvey, Savino, and Mares make clear to students that based on the evidence — as opposed to Facebook trends:

"False reports happen; they are recurrent; and there are laws in place to deal with them when they do. They are, for lack of a better word, common."

They are common because people lie for all sorts of reasons — from the need for attention to the lure of profit, out of anger or revenge, to conceal crimes or illicit activity, or because of addictions or mental health issues. Unlike activists or advocates "steeped in bias, denial or self-interest," Turvey and his colleagues teach criminal investigators and students that true professionals "do not seek confirmation of beliefs or ideas: they seek eradication of false theories. All reports of crime must be investigated. Otherwise, they are merely unconfirmed allegations that the ignorant or lazy may pass along as truth."

Rape is a devastating crime. So is lying about it. Ignorant advocates and lazy journalists can be as dangerous as derelict detectives and prosecutors driven by political agendas instead of facts.

When #MeToo bandwagons form in the midst of a panic, innocent people get run over.