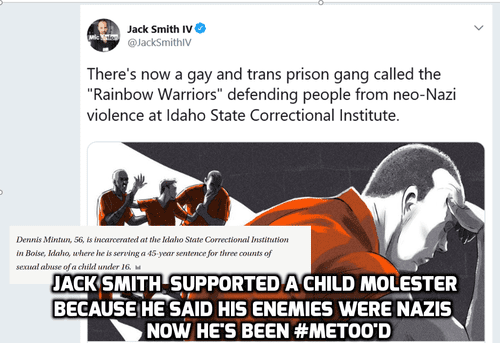 Jack Smith IV is a fairly standard example of a Leftist journalist who promotes Antifa, holds whites in low regard, and strives to paint everyone on the Right as a Nazi. His Twitter bio boasts of his union membership, and he describes himself as a “union thug.”

Smith wrote for Mic.com, and specialized in trying to snitch on anyone and everyone who might be linked to white dissidents. Some recent examples:

The idea here: to convince the enormous companies behind social media platforms to deplatform patriots like us at VDARE.com, and even just anyone on the Right. In this way, self-described “union thugs” who love anarchist terrorists strive to direct the actions of some of the richest men in human history. Incredibly, this tactic often works.

Mr. Smith’s beat was a sweet one. You get to write condescendingly about people you despise, you get the ego boost of helping deplatform those you view as evil, tons of people with money and influence praise what you do, etc. At present, Smith has more Twitter followers than VDARE.com (and VDARE.com has a lot by Dissident Right standards).

If you were a professor of journalism, you might tell your students that Smith could serve as something of a role model for them. A crusader for our secular theocracy who does well for himself to boot!

It reminds me of atime in a college political science class: at the end of a discussion about the American Right, a fellow student turned to me and said: “Man, you know a lot about these guys. You should work for the Southern Poverty Law Center!”

If only I could be so self-interested and heartless…

All of this was true of Jack Smith IV—until late September. Then he got #MeToo-ed. And now none of it is true!

On the 24th of that month, feminist juggernaut Jezebel.com published a piece by its editor-in-chief, Julianne Escobedo Shepherd, The Next Step for #MeToo Is Into the Gray Areas, that detailed at considerable length the claims many different women have made about Mr. Smith’s indelicate (to put it mildly) past behavior.

Not long after, Mr. Smith no longer worked for Mic, and was no longer a member of the union he was once a “thug” for.

He has been silent on Twitter since the Jezebel piece was published, and his Instagram is now set to private.

But Smith is far from the only white male writer on the Left, who specialized in anti-Right, anti-white, pro-feminist beats, that this has happened to. A brief rundown:

While these constitute the juicier, more high-profile examples, there are a plenty of others. Mike Germano, chief digital officer at Vice, had to leave the company after #MeToo accusations. So did Don Hazen, the executive director of AlterNet. Morgan Spurlock, the Leftist documentarian (most famous for Super Size Me) stepped down from his own company. Lorin Stein, editor of Paris Review, resigned. So too for Hamilton Fish (the Fifth, the first one to be a Democrat) publisher of The New Republic; Leon Wieseltier, mainstay writer at The New Republic; Lockhart Steele, a higher-up at Vox; Richard Myers of GQ, and not a few others.

And remember: this is all just from those who were felled within the world of writing/journalism. A list of Leftist/Feminist #MeToo scalps from the world of media and entertainment would be perhaps five times the length of this one. [After Weinstein: 71 Men Accused of Sexual Misconduct and Their Fall From Power, by Sarah Almukhtar, Michael Gold, and Larry Buchanan, The New York Times, February 8, 2018]

This is the problem with #MeToo: it is not especially interested in evidence and doles out the same punishment to alleged rapists as to alleged ass-grabbers.

On top of that: there is to be no chance of redemption—unlike, say, black musicians with long rap-sheets of proven crimes, like Jay-Z, Tupac Shakur, Chuck Berry, Ike Turner, James Brown, Snoop Dogg, et cetera, et cetera, all of whom had profitable careers after serious felony convictions, many of which involved attacks on women.

I don’t want to pontificate about which of these guys I think are guilty and which aren’t. Instead, I would like to focus on this: there have been a great deal more casualties on the Left than the Right.

Resignations of Rightists from all of this, in the world of writing/journalism, have fallen almost entirely on the shoulders of minor politicians (which is true of the Left as well, but more so) and employees of FOX News. The offices of The National Review, The Weekly Standard, The Daily Caller, Breitbart, The Federalist, City Journal, First Things, The American Conservative, The Washington Times, WND, etc., have been untouched.

It is difficult to see how all of this can be causing anything but a “brain drain”—to a greater or lesser extent—for Leftist outlets. Young men with an interest in politics and writing are certain to be observing this. On some level, they know that they too could end up like any of these men: hold all the right opinions, publish all the right condemnations, please all their professors—and still lose everything overnight, in some cases, because of one blog post by one woman not even claiming you did anything criminal, just impolite.

The four men I focused on above had extremely Correct opinions. For example:

But none of this mattered the second an accusation was leveled. All their hard work and ideological loyalty to the Left got them nothing.

Less than nothing, really. Now if you Google any of them the accusations against them and subsequent fallout are in the top results.

Will this shift young wayward budding intellectuals towards the Right?

Yes. It is an obvious “market reaction” to our culture’s ever evolving sexual mores. (There has never been a better time to read F. Roger Devlin then right now). Young men, especially white ones (Rensin, Hafford, Kriss, and Smith are all white), cannot help but realize that no matter what, if they are on the Left, they too could one day be purged and never forgiven by their former friends and allies after a single baseless accusation.

Moreover, where can the women most likely to make this kind of accusation at the drop of a hat be found?

On the Left, of course, carrying degrees in Sociology, Women’s Studies, and plenty of other fancy labels for “$100,000 of debt.”

If you are at an office happy hour, have too much to drink, and then smack a colleague’s ass and try and kiss her, your fate is largely going to be determined by whether your office is Left-wing or Right-wing.

For the record: you should not get drunk and smack a colleague’s ass. It is not a good thing to do. But we are all fallible humans, and stuff happens.

On the Right, generally speaking, you are going to be sternly instructed not to do that again. On the Left, you have rolled the dice. Your whole career might end right then and there.

As #MeToo stays strong well into the second year of its mainstream existence, this difference has to be becoming steadily more obvious to everyone—particularly men.

Many of them out there are probably thinking right now that plenty of their literary and journalistic heroes—Ernest Hemingway, F. Scott Fitzgerald, Hunter S. Thompson, et al.—would not have become mainstream successes in today’s environment.

And they’d be right. Once you have realized this, why get involved with the Left at all?

And this, readers, is great news.

It’s a special case of what VDARE.com Editor Peter Brimelow described in The Democratic Party Has Tipped—Great News For The GOP (Which Doesn’t Deserve It):

One reason white men have gone to the Left—I don’t think I’m giving away any secrets here—is that the Left had easier women. But that benefit is being brought to a screeching halt by the #MeToo campaign, abetted by rapacious trial lawyers and lesbian man-haters, to pathologize heterosexual relationships.

So do not let the ordeal of Brett Kavanaugh get you down too much.

And to all Leftist men who helped get our culture to this point, and then got burned from the very flames they lit and stoked: [expletive deleted] you—this is hilarious.