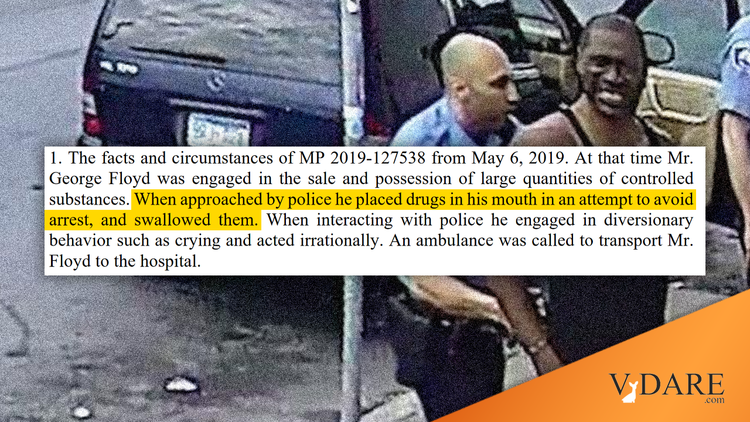 In 2019, George Floyd Swallowed His Drugs Upon Arrest

PLEASE TAKE NOTICE the Defendant, Derek Michael Chauvin, may offer at trial
evidence and circumstance of the following:

1. The facts and circumstances of MP 2019-127538 from May 6, 2019. At that time Mr.
George Floyd was engaged in the sale and possession of large quantities of controlled
substances. When approached by police he placed drugs in his mouth in an attempt to avoid
arrest, and swallowed them. When interacting with police he engaged in diversionary
behavior such as crying and acted irrationally. An ambulance was called to transport Mr.
Floyd to the hospital.

So, it’s likely Floyd stuck his fentanyl in his mouth. He might have survived this time too, only the ambulance got lost.

In any case, the incident doesn’t seem to have anything to do with White Racism (unless you blame Floyd’s repulsive character on white people), and little to do with Police Brutality.