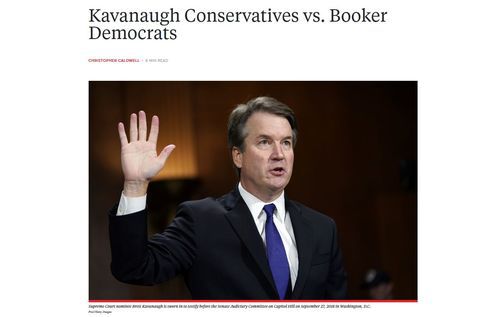 The Kavanaugh Hearings Have Redpilled Neocons, Mainstream Conservatives, And Never-Trumpers 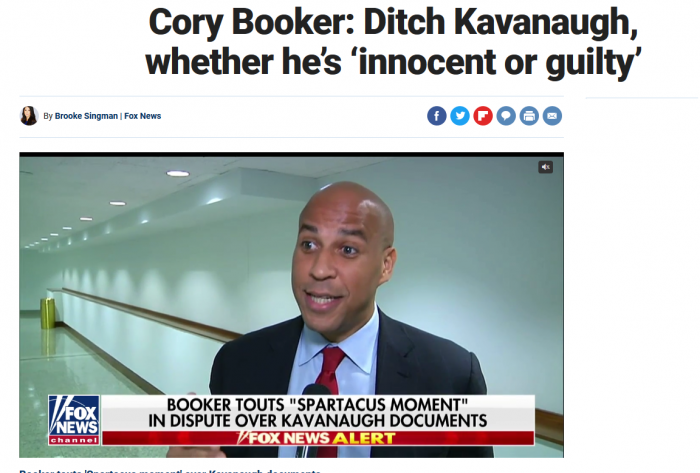 In the Weekly Standard, Christopher Caldwell talks about "Kavanaugh Conservatives vs. Booker Democrats". Caldwell has a long record of being sensible about Trump, immigration and nationalism, but it's amazing to see a headline like that in Bill Kristol's magazine, since the difference between the "Kavanaugh Conservatives" and "Booker Democrats" is literally the difference betweeen black and white.

Caldwell starts by saying that Kavanaugh’s "defiant September 27 statement denying the charges leveled against him in the course of his Supreme Court confirmation is the defining speech of our time, " and ends the article with this:

Kavanaugh’s foes were comfortable voting against him on the basis of temperament. The question is not “whether he’s innocent or guilty,” said Cory Booker. “I am emphatically not saying that Kavanaugh did what Ford says he did,” says [Kavanaugh foe Benjamin] Wittes. “The evidence is not within 100 yards of adequate to convict him. But whether he did it is not the question at hand.”

What is that supposed to mean? This amounted to saying that Brett Kavanaugh lacks a “judicial temperament” because he objected to being summarily executed following a show trial. If you permit the criteria of culpability to shift, then you have the circular logic typical of totalitarian regimes. Just as there are people famous-for-being-famous, now there are people guilty-of-being-accused.

Suddenly there are two parties in this country: There are Kavanaugh conservatives and Booker Democrats. Maybe this will change. For now, those who claim to be weighing the balance between the two are obtuse, nostalgic, or trying to persuade their old comrades not to shoot them in the back as they make their way towards enemy lines. Americans of all political persuasions have woken up this week—some with exhilaration, some with despair—to the realization that, as the essayist Midge Decter once wrote, they are going to have to join the side they are on.

It's a case of not "seeing the light" but "feeling the heat". Case in point, Erick Erickson, formerly the poster boy for cuckservatism and Never-Trumperism:

Jay Nordlinger may not be redpilled himself, but he knows a man who is:

From a conservative who has been disgusted by the Trumpified GOP: “I didn’t think I could drag myself to the polls. But after the Left’s performance in the Kavanaugh affair, I would crawl across broken glass.” I believe this sentiment is common.

Then there's Lindsey Graham--that has been amazing:

It seems like a lot of people who have been hating on "white nationalism" and "identity politics for white people" have been realizing that as far as the Totalitarian Left is concerned, they're just as white as we are.