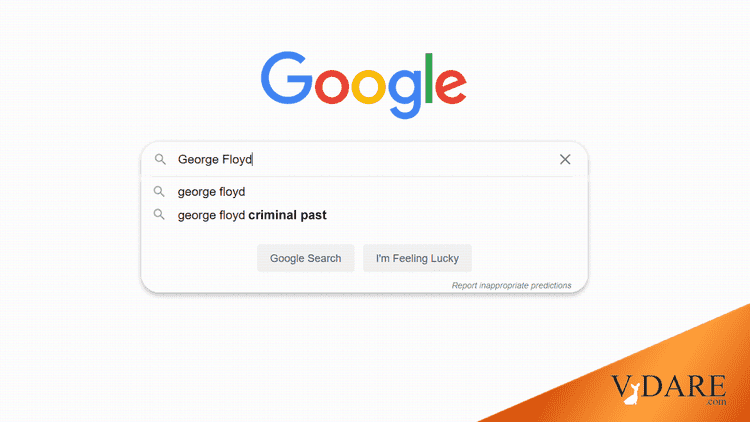 Suppressing "George Floyd's Criminal Past"—If There Is Hope, It Must Lie In The Robots

An op-ed in the Los Angeles Times is extremely angry that Google’s artificial intelligence robots haven’t yet been fully converged with The Narrative:

Last Wednesday, late into the afternoon, the New York Times published an op-ed essay in which Sen. Tom Cotton (R-Ark.) called for the deployment of active-duty military forces into U.S. cities with the slippery, panicked and dangerous intention of “restoring order.”

At nearly the exact same time on the exact same day, Trumpist provocateur Candace Owens began a Facebook livestream of a nearly 20-minute-long tirade declaring George Floyd a “criminal” and a “horrible human being,” among other incendiary remarks attacking the Black Lives Matter movement writ large.

The Cotton op-ed was rightly met with widespread condemnation (including criticism inside the New York Times newsroom). It has since been amended with a lengthy editors’ note and led to the resignation of editorial page editor James Bennet. It sparked a continuing debate about the role and responsibility of a free press in a country teetering on the brink of authoritarianism.

Meanwhile, on Facebook, the Owens video has since been viewed 82 million times. No retractions. No fact check. Nothing.

In case it wasn’t clear yet, fascists don’t need a New York Times op-ed to advance their movement. They already have an incredibly potent and willing partner in the shadowy algorithms of Big Tech.

Even as swells of protesters have taken to the streets in cities and towns across the entire country, it’s important to remember that for every marcher losing their protest virginity (and every lifetime activist yet again rallying for civil rights), there’s another two or three or five people digesting an inscrutable pile of disinformation and divisive junk online.

The internet is a second reality of our own design, symbiotically connected to and colliding with the lives we live when nominally offline, yet one whose impact is too often ignored. While establishment media devolves into an esoteric — necessary and righteous, but esoteric — debate about the continued relevance and importance of Gatekeeping, Owens, a known Hitler apologist, and countless other inflammatory conservative pundits like her, dominate the most important social media platforms unchecked.

Owens’ video became the top shared Facebook post of last week, according to New York Times tech columnist Kevin Roose, and currently has 1.4 million shares. The Cotton op-ed, for comparison, has now been shared 16,304 times on Facebook, according to CrowdTangle, a digital tool for measuring social media engagement

This is by design. Not implicitly, per se, but certainly complicity. Facebook’s own internal investigation into its suggestive content algorithm revealed that the platform is largely based on divisiveness and inflammatory content. Provocative political content tends to keep users online longer than most other types of content. With its ad-based model, Facebook is incentivized to peddle as much divisive content as users will tolerate. More hate, more time online; more ads sold, more revenue for Zuck and Co.

And now we’re seeing the consequences of Facebook’s chaos play out in real time. When typing “George Floyd” into the Google search bar, the predictive search tool quickly reveals a search for “George Floyd criminal past” as the next most likely search (with “George Floyd criminal history” not too far behind). This is the direct result of a high frequency of searches for these exact terms, as noted by Google’s explanation for how its predictive search operates:

“We look at the real searches that happen on Google and show common and trending ones relevant to the characters that are entered and also related to your location and previous searches.”

Google, however, also says search predictions can be removed if they violate the autocomplete policies, which include:

“Hateful predictions against groups and individuals on the basis of race, religion or several other demographics. Violent predictions. Dangerous and harmful activity in predictions.”

The notion of framing Floyd as a former criminal — which is, in fact, true, though completely irrelevant — is the basis for commentators like Owens and others to paint his killing at the hands of the police as something other than tragic. Perhaps even something he deserved. It’s the same racist tactic used to discredit Michael Brown’s death in Ferguson in 2015, and even Trayvon Martin’s death in 2012 (the hoodie made him look “suspicious”). By allowing their predictive search tool to promote “George Floyd criminal past,” Google may be violating its own autocomplete policy and allowing a dangerous, hateful and racist narrative to take hold.

Using the Google Trends tool — which visualizes searches for specific terms in relation to historic frequency of searches — we see that searches for “George Floyd criminal past” were virtually nonexistent before Owens’ viral screed, and have increased dramatically in the days since.

This may be tangible digital evidence that a counter-narrative to Black Lives Matter is beginning to grip the public. And although there may not be a 1:1 correlation with users who search “George Floyd criminal past” and those who believe his criminal past should make him anything but a martyr, search trends have proved to be a powerful real-time tool for gauging public opinion in the past (data scientist and New York Times op-ed contributor Seth Stephens-Davidowitz wrote an excellent book on this very topic).

So while hundreds of thousands of protesters support the Black Lives Matter movement in the streets, it’s important to remember our lives — and public opinion — exist and are shaped by two separate, competing worlds: one physical and one digital.

Maybe the past two weeks mark a tipping point in race relations and police reform. Or maybe not, and we’re naive to think they do.


Brian A. Boyle was a 2019 intern with the Editorial Pages of the Los Angeles Times.

The high price of cheap interns.