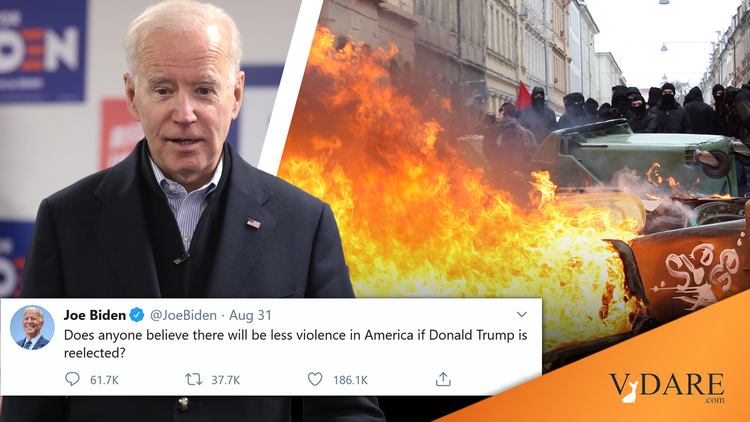 Biden: You Gotta Nice Country Here, Americans. It Would be a Shame if Something Happened to It

As others have said, Biden comes across here like a gangster working a protection racket on a speakeasy.

After all, the vast majority of politics-influenced violence in the U.S. since Memorial Day has been committed by people who are anti-Trump. And because Biden is the official/nominal leader of anti-Trump forces, his threatening Four More Years of pillage, arson, and funeral shoot-ups in case he loses the election under the Constitution is pretty bad.

On the other hand, Biden could take steps in September to reassure law-abiding voters that he would use the Presidency to uphold law and order. It’s not at all hard to believe that, deep down, Joe prefers law and order to what is going on now.

For example, right now he might use his person-to-person political skills to get the mayor of Portland to shut down the anarchy. That would be a positive step toward convincing voters he is on the side of rule of law rather than mob mayhem.

But … the problem with that kind of strategy is that would make it clear the problem this summer has been Democratic politicians. Lots of Democratic media personalities have been saying:

And if Biden temporarily strong-arms the next generation of Democratic office-holders into going along with Joe … well, that would speak well of Biden personally. But it may not reassure enough voters into voting for a 77-year-old candidate whose worldview is increasingly seen as out of date in the Democratic Party.