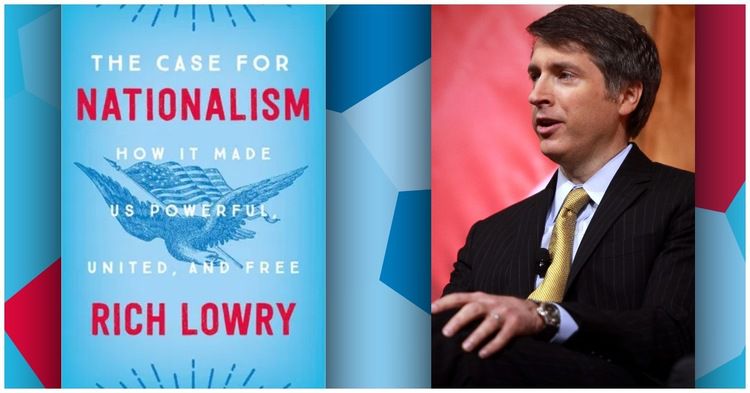 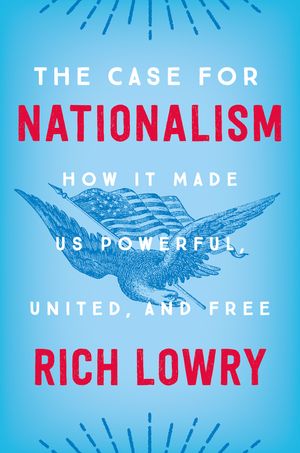 Boris Johnson’s dramatic Brexit election victory is a dramatic demonstration that the Ruling Class hasn’t smothered nationalism in the UK at least. But it’s trying, everywhere. The term “National Conservatism” is already being co-opted, and now the term “nationalism” itself is apparently to be neutered, by Cuckservative Review Editor Rich Lowry in his new book The Case for Nationalism.

Lowry can’t have liked this assignment from his gatekeeping paymasters: inevitably, Leftists have attacked the book, forcing Lowry to defend it against charges of (guess what?) “racism.” But Lowry’s faux-nationalism does not include acknowledging the WASP ethnic core that created this country and its institutions, or the Historic American Nation, the nation as it had evolved up until the 1965 Immigration Act disaster. Though Lowry claims to deny that America is a Proposition Nation, his version of nationalism appears to be a Hazonyish evasion of ethnic reality not really different from the “nation of ideas” pushed by Open Borders activists and neoconservatives.

Conservatism Inc. is trying to suck the life out of nationalism the way it did from the Tea Party. It’s more important than ever that genuine American nationalists become an independent political force.

Naturally, Leftists are afraid of “nationalism”—even the word. The Washington Post’s Carlos Lozada [Tweet him] wrote a blistering review accusing Lowry of playing word games [The inherently, intrinsically, and inevitably flawed case for American nationalism, October 31, 2019]. “Nationalism cannot be bad because Lowry has defined it as good, rendering The Case for Nationalism a book-length study in begging the question,” he wrote. 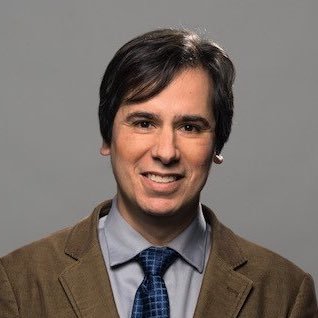 [Lowry] looks back with nostalgia to the days when immigrants were overwhelmingly European, and regards with suspicion an ‘imbalanced’ time when more hail from Latin America, on the grounds that the former assimilated more easily.

Georgetown Professor Charles King in Foreign Policy ripped the book and dismissed Lowry’s nationalism as “essentially that of every other contemporary demagogue” [America’s Original Identity Politics, November 7, 2019]. Among other charges, King [Tweet him] argues that when Lowry

…uses the term ‘we,’ it almost always refers to white people of Anglo-Saxon heritage… that is how Lowry can speak of ‘our dealings with the Indians and Mexicans,’ or the fact that ‘the Indians fought us, to try to stop our advance and defend their civilization.’

The cultural foundations of America, as you note repeatedly in the book, are mostly white and mostly Christian. And for many millions of people, Americanness is bound up with these ethnic and religious markers.

So how does that square with the desire for a truly inclusive nationalism?

Indeed. America was in fact built by a white, Christian people and its creation involved the conquest of other peoples. Therefore, how can we simultaneously justify nationalism and universal equality?

Lowry tries to square this circle. He responds to Illing that by saying there is a “cultural core that is important but it’s also organic and open.” He specifically cites the English language as a critical factor. (He’s right about that, which is why the GOP’s refusal to act on Official English is all the more mystifying.)

The point is that we have a history and a foundation, but anyone can come here and embrace those traditions. We’re still a melting pot, but a melting pot that has to have some coherence. Things obviously evolve over time, and that’s healthy and good as long as the core isn’t lost.

White nationalists aren’t defending white people merely for biological reasons. They see white people, they see Western civilization, they see America as a distinct and inviolable culture. The defense of culture and race, in other words, is one and the same.

Lowry denies this, citing a story about college Indian immigrant friend who Americanized by watching television: “The idea that there’s anything important about our culture that is not accessible to people of all backgrounds and races is just a lie that I totally reject.”

Yet simply asserting that ethnicity and culture are disconnected because an Indian guy watched television is hardly compelling. If the original people of the nation are replaced, how could the culture not change?

Lowry responds to King’s hostile review in Foreign Policy in similar defensive fashion. He insists that there is a united American people that is not defined by race [A Preposterous Review, by Rich Lowry, National Review, November 12, 2019]. We are “inextricably bound up together and so profoundly influenced by one another we might not be fully aware of it,” he claimed. He celebrates the increasing rise in interracial marriages because it shows the “fluidity of racial categories, which I consider a good thing in and of itself.” And of course he denies that there is a racial motive in his condemnation of the current “imbalanced” immigration wave. Lowry claims simply to be worried about whether assimilation can work when ethnic enclaves keep developing as mass immigration continues.

Lowry also attempts to defend himself against racism by triangulating against Jefferson Davis and dismissing Southern nationalism. Of Davis, Lowry writes:

The so-called Southern nation he served wasn’t fundamentally distinguished by a different language, different Founders, or different history… it was a contrivance to protect slavery—again from the national government of the United States of America. 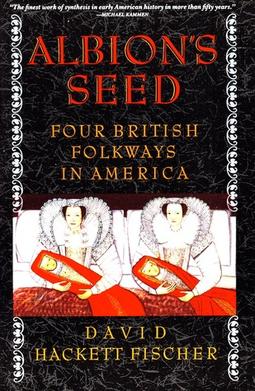 In fact, of course, the ethnocultural differences between the South, North and other American sections were deep even apart from slavery, as famously documented, for example by David Hackett Fischer in Albion's Seed: Four British Folkways in America.

And Lowry’s responses raise more questions than they answer. After all, had the 1775 Invasion of Quebec gone differently, the United States of America might look fundamentally different today. It could have been a polity that contained several nations, just as Canada contains, uneasily, French-speaking Quebec today. “Nations” are partially constructed from the top-down just as they are from the bottom up. If the South had won independence, we would no doubt be discussing the inherent differences between Southerners and Yankees.

Lowry is arguing that America has a core culture that others can integrate into—essentially what the late Samuel Huntington said in Who Are We? Lowry claims to want an inclusive, top-down “American” identity. Emphasizing the English language, abolishing the use of racial categories by the government, and changing immigration policies might protect this “core.” As shown by his dismissal of the Confederate cause, Lowry also identifies the American nation with the federal government.

But what Lowry’s critics get and Lowry doesn’t is that the American “core” is a White Anglo-Saxon Protestant one—as Huntington did acknowledge.

Obviously, non-WASPs can be integrated into this to some degree, which is why people who are not descended from Revolutionary colonists can refer to “our Founding Fathers.”

Yet this is obviously easier for whites to do this than for non-whites. After all, no matter how much you disguise it, America was created by European settlers exploring and eventually conquering a continent. America was conceived by the Founders as a white country. The egalitarian Declaration of Independence did not consider indigenous people “American,” referring to them as the “merciless Indian savages.” America’s victory in the Mexican War is perceived as a defeat by many American citizens of Mexican origin today. If we want to accurately judge the strength of American identity, ask those who are obtaining American citizenship at Mexican consulates in the U.S. if “we” won the Mexican War. Even Lowry’s call for defending English, abolishing the use of racial categories in government, and encouraging a common culture fall flat. Donald Trump is incessantly called a “white nationalist,” but in fact he has done nothing to change the racial mix of the immigrant influx or to combat Affirmative Action, let alone Official English. Besides, current public policy incentivizes non-whites to further deconstruct American civic identity. Affirmative Action gives them benefits if they reject assimilation and focus on rent-seeking identity politics.

Besides, what exactly are these immigrants supposed to assimilate to?  For example, some highly educated and privileged products of America’s universities have clearly assimilated to the Ruling Class’s dominant culture of Cultural Marxism. Is this a triumph of patriotic assimilation?

Or take Lowry’s “Indian immigrant” friend who learned “cultural references” from television. Is American culture then simply whatever is generated by Hollywood and media oligarchs? That’s hardly an authentic “national” culture.

Few Leftists are actually against nationalism. They are just against American nationalism or any kind of self-conscious white identity. (Which, until the 1965 immigration disaster, were essentially seen as the same thing). However, Black nationalism—meaning literal secession and a black ethnostate—has quite a following among current and former members of the Black Congressional Caucus. The racial mysticism of the Aztlan concept flourishes in many Hispanic communities. Powerful corporations and individuals disgusted at American nationalism dutifully bow their heads to Chinese nationalism. Above all, the leading members of both parties support Israel, which has now explicitly defined itself as the “nation-state of the Jewish people.” (So much for the Israeli Arab minority, let alone the Palestinians).

Meanwhile, Americans can no longer agree on who “we” are.

This didn’t have to happen. VDARE.com Editor Peter Brimelow warned pre-purge National Review readers of the inevitable nation-breaking consequences of mass immigration nearly three decades ago in the cover story that grew into his 1995 book Alien Nation: Common Sense About America’s Immigration Disaster. He was purged (along with Editor John O’Sullivan) for his trouble. Now Lowry, O’Sullivan’s parricidal replacement, is offering timid suggestions to solve a problem that he enabled with his own stupidity and careerist cowardice.

If there is to be a real American nationalist movement, it cannot come from Conservatism Inc.  Their donors and their MSM mentors will never allow it.

Which is why American nationalists must build their own institutions.